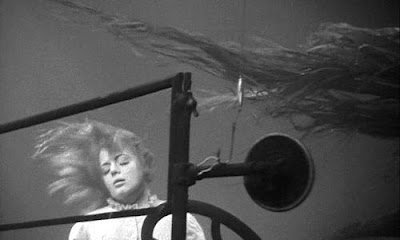 I've long been a fan of Roger Ebert's Great Films list and since there are a ton of films on that list that I haven't seen yet, I've decided to take it on as an ongoing personal project and work my way through, sort of like a directed viewing guide. There are a number of films from the list that I have seen and, in fact, already reviewed but that still leaves a couple hundred films for me to experience and/or write about for the first time. I'll be starting with The Night of the Hunter, Charles Laughton's moody, atmospheric and altogether excellent thriller.

On the face of it, the story of The Night of the Hunter is pretty simple. It involves two children - John (Billy Chapin) and Pearl (Sally Jane Bruce) - who know the location of $10k that their father stole and hid before being apprehended by the police and hanged for the crime. Their father's former cellmate, "Reverend" Harry Powell (Robert Mitchum), shows up, sweet talks their newly widowed mother (Shelley Winters) into marriage, murders her, and then terrorizes the children as he tries to get at the money. The kids eventually find refuge with Rachel Cooper (Lillian Gish), a force of good just as powerful as the evil represented by the relentless Powell.

The story is told in very simple and direct terms. The children are innocents, blank slates who live moment to moment, for whom events (with one notable exception) have no permanent meaning. Shortly after their father dies, John and Pearl are subjected to taunting by other children. When Pearl begins to repeat the chant, John tells her not to - not because it's disrespectful to the memory of their father but because she's "not old enough." Later when Pearl asks if he thinks their mother is dead, John simply says that yes, he believes she is. They see the world in black and white and the film itself seems to see things that way as well, unfolding in a dreamy, fairytale way with little ambiguity in terms of "good" and "evil."

If the world of children is one of innocence, the world of adults is one of corruption. The adult world is one of vice, hypocrisy, greed and violence - with the exception of Rachel. Powell famously has the words "love" and "hate" tattooed on his hands and delivers a speech in which he explains the history of the battle between the two, a speech which ultimately foreshadows his scenes with Rachel towards the end of the film. Two of the best things about this film are the characters of Powell and Rachel (especially as they are played by Mitchum and Gish). Powell is a memorable and truly terrifying villain, but Rachel is just as powerful, a strong, principled woman who refuses to back down and be intimidated. There isn't a lot of "action" in their confrontation, but it's epic because they're such distinctly and intensely drawn characters.

The Night of the Hunter was the only film that Charles Laughton would direct, a real shame since he proves to be an incredibly effective presence behind the camera. The story is told in an efficient way that keeps the tension at an incredible high from beginning to end (the score by Walter Schumann and cinematography by Stanley Cortez certainly help) and the acting is strong throughout (Mitchum gets some credit for that since Laughton's dislike of children made it necessary for Mitchum to take the reigns in many of the scenes involving Chapin and Bruce). Laughton is a strong visual stylist and throughout the film he composes some really great shots - it makes you wonder what else he would have done had this film been better received by critics and audiences when it was released. But history has been the true judge of this one, now considered a classic, and it is definitely deserving of that status.