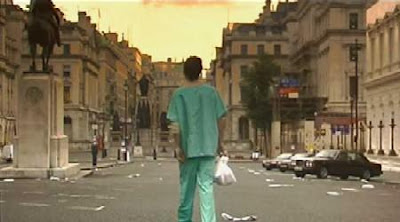 Zombies! Society's breakdown! Badass chicks! Chaos, confusion and... hope. In the end, yes, there is hope, not to mention a great sense of mythology. 28 Days Later is a film with a lot going for it, which is perhaps why it's inspired sequels in the form of one film (28 Weeks Later; a second sequel called 28 Months Later has been in the planning stages for a while but is held up by disputes between the people with rights to the story) and two graphic novels.

28 Days Later has one of the best opening sequences I've ever seen. After a brief prologue in which animal activists attempt to rescue chimps being used for medical research - research which has resulted in them being infected with a contagious disease called "Rage" - the film flashes forward 28 days when Jim (Cillian Murphy), a bike courier who has been in a coma, awakes. The hospital is deserted and the streets of London are much the same. It makes for a chilling picture as Jim walks through the discarded debris of the city's final days and then finally finds a newspaper announcing the evacuation.

Jim makes his way to a church where he has his first encounter with the infected. He's rescued by Selena (Naomie Harris) and Mark (Noah Huntley), who fill him in on what he's missed and reluctantly agree to go with him to his parents' house so he can find out what's become of them. After Mark becomes infected (and is subsequently killed by Selena), Jim and Selena find refuge with Frank (Brendan Gleeson) and his daughter, Hannah (Megan Burns), and together the four set out in search of a military outpost where, it is said, there is "the answer to infection."

As I said, the film starts out really excellently. Director Danny Boyle and writer Alex Garland craft an incredible amount of tension immediately and manage to sustain it for nearly two hours. The "infected" are introduced in an effective way and used sparingly right up until the climax, allowing the idea of them to build up for the audience before they begin to dominate the screen. The film's final act tends to be a bit conventional, becoming a one man army situation as Jim mows people down to save himself, Selena and Hannah, but that can't erase what the film accomplishes in it's first brilliant two-thirds.

The characters, particularly Jim and Selena, are well-drawn and well acted. I'm not really familiar with Naomie Harris outside of the Pirates of the Carribean films but she's pretty awesome and by all rights should be a much higher profile actress by now. Cillian Murphy, who's been carving out a nice niche for himself as a character actor, carries the film with aplomb, guiding Jim through the subtle shifts that takes him to the point where, for just a split second, he and the infected are indistinguishable. His transformation is part of the film's exploration of human nature outside the boundaries of society and while the screenplay doesn't do quite as much with that theme as it could, it nevertheless manages to make its point. 28 Days Later is definitely better and more thought provoking than your average horror movie.