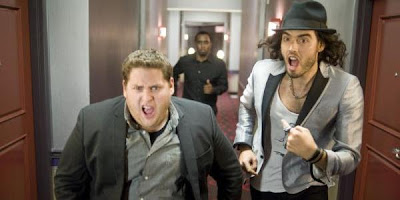 I don't particularly like Jonah Hill or Russell Brand - I find that a little of either of them goes a long way - which means that, a) it's surprising that I even saw Get Him To The Greek, and, b) it's miraculous that I actually enjoyed it. This Forgetting Sarah Marshall spinoff is funny and more charming than you might expect from a film where a fair bit of the humor is vomit and scatalogically based.

Hill stars as Aaron Green, an intern at a record company run by Sergio Roma (Sean Combs). When Sergio puts him on the spot and challenges him to come up with an idea to generate some revenue for the company, Aaron suggests that they bring rock star Aldous Snow (Brand) to LA to perform at The Greek Theater in celebration of the 10 year anniversary of the live album Aldous recorded there. Sergio is skeptical about the plan because Aldous has quite publicly fallen off the wagon since the release of his last album "African Child," a record so disastrous that it is said to be "the worst thing to happen to Africa since apartheid," but he decides to give it a shot anyway.

Plans are made for the concert and Aaron is sent to London to accompany Aldous to LA and ensure that he arrives on time. Things get off to a bad start when Aldous first delays their departure from London and then takes them on a detour to Las Vegas, where things only get more out of control. Drugs, booze and women are around every corner, presenting stumbling blocks that just might (but, since this is a movie, won't) keep Aaron from coming through and getting Aldous to the show on time.

Written and directed by Nicholas Stoller (Jason Segal gets a writer's credit for developing the characters), the film manages to find a nice balance between lowbrow, raunchy humor and, if not quite highbrow, at least middlebrow, clever humor. The glimpses we get of the music videos by Aldous and his ex-girlfriend Jackie Q. (Rose Byrne) are exagerated enough to be funny yet still seem vaguely plausible, which perhaps says more about the current state of music videos than about this particular film. Get Him To The Greek depends on extreme behavior and extreme characterizations but it manages to do this without making it seem completely unrealistic.

I think the thing that really made this movie work for me is that, at their core, both Aaron and Aldous are basically good guys. They don't always behave like good guys, but the film allows them to be more than caricatures which helps provide the story with a heart and also seems to temper some of the habits both actors have that I personally tend to find annoying. That being said, however, the film is far from perfect and though the screenplay is, for the most part, quite snappy it does start to meander a bit in its final act. All in all, Get Him To The Greek would probably be a better film if it shaved off about twenty minutes and was a little more focused with regards to the ending.

Funny, touching story, and ultimately the welfare of friendship and forgiveness - and rock and roll!