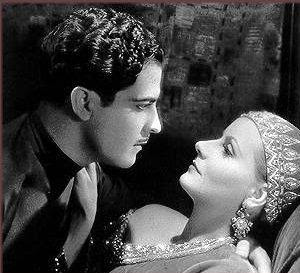 This isn’t a film about the person Mata Hari, as much as it is about the legend of Mata Hari. The film does a good job at playing up the elements of her mythology and although there are good pieces to the film, these pieces ultimately don’t work very well together. Part of the problem is that the film tries to go in too many directions, so that we don’t really get a sense of what it wants to tell us about Mata Hari.

Garbo, naturally, plays Mata Hari – spy, dancer, enchantress. The costume designer Adrian (who dressed Garbo in all of her films from Anna Christie onwards, and played no small part in helping to create the Garbo image) gives her a variety of hats and headdresses in the film, drawing focus to her face and giving us a sense of the character, one who is always hiding, keeping things under her hat, as it were. Her costumes are also very exotic, which help to establish her as someone that other people in the room would instantly find intriguing because she’s so different from their experience.

Garbo is good as Mata Hari, even if the character herself seems a bit directionless. She’s believable in her scenes with Russian General Shubin (Barrymore), playing a flirtatious double cross with him – these scenes are the best in the film because Garbo and Barrymore play so well off each other and seem so comfortable together. The scenes with Navarro as a Russian pilot who falls for Mata Hari are good – Navarro is certainly believable as a naïve and inexperienced man who gets in over his head with such a worldly woman – but we never really believe in the relationship. When Mata Hari is using and toying with him to get information, it’s believable (there’s a scene where he tells her about his statue of the Madonna, revealing that he promised his mother that he would always keep a candle burning in front of it. When he afterwards professes his love to her, she challenges him by asking him to blow out the candle. He eventually acquiesces and there’s a certain degree of cruelty to the scene, seeing how broken up he is about doing it and how helpless he is when he’s around her – and how she knows that and uses it against him). When she risks her life and her freedom to see him, it’s not as believable.

While the film doesn’t present an accurate version of history (although perhaps it should be credited for at least getting Mata Hari’s fate right instead of trying for a happy ending), it is an interesting example of Hollywood history. Released in 1931, this is a pre-code film, which are always fun to look at just to see how far movies went before the Hays office tried to squeeze all the fun out of them. Mata Hari dances seductively, uses men for sport and treachery, and spends the night with a man in bed. There’s no ambiguity about this last part, as there are in some films from the Golden Age – at night all the lights go out. In the morning, Mata Hari emerges from the bedroom. A few minutes later Rosanoff (Navarro) follows in his dressing gown. The overtness of these scenes can perhaps be attributed to the fact that Mata Hari was already fairly notorious and the fact that she dies in the end. It’s acceptable for her to be a woman who uses sex as a means to an end, because she’s going to be punished for it in the most brutal way possible.

This isn’t a great film, but it is entertaining and a good showcase for Garbo. It plays to the strengths of the Garbo image – the exotic/special character of her beauty, the mysteriousness of her nature and the sense of danger that both of those things entail. Just don’t take the film too seriously and you should be able to enjoy it for what it is.

Posted by Norma Desmond at 5:15 PM

Thank you. I am very fond of the film.