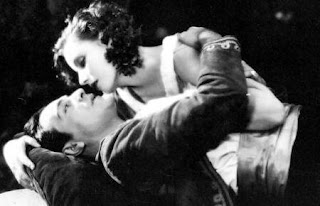 This is a very busy film. Aristocrats party in Paris, dams burst in Argentina, men fight with whips, and with swords, and at the centre is a woman on whom it will all be blamed. Garbo, of course, is the woman (Elena), the temptress to whom several men succumb, more often than not leading to their deaths.

This isn’t an especially good film – the biggest problem is perhaps that you can’t really imagine Garbo going out of her way to get any of the men who accuse her of tempting them (this maybe isn’t the fault of the actors - Garbo simply has a presence on screen that is difficult to match). There’s also a problem with the flow of the film (the first two acts plod along, the third rushes to its conclusion) and there’s a sense of a couple of key scenes missing, the holes they leave in the plot filled by the device of characters leaving letters for each other to explain things.

But there are good things here as well. The dinner party scene at the beginning features two great tracking shots: first from overhead, starting with the host then panning down what turns out to be a massive dining table full of guests, so that when it finishes the host is now just a speck deep in the middle of the shot; the second is a pan underneath the table, showing the feet of the guests, some playing footsie, one woman trying to fix a run in her stocking, one nervously tapping her feet, a few stretching out their legs. There is joy in these scenes – until the end when Elena is pronounced a temptress by the host, her former lover, who then commits suicide.

Throughout the film men will accuse Elena of being a temptress. Following the dinner party, her husband accuses her of destroying the host – whose affair with Elena also served to provide income for himself (“He sold me to Fontenoy,” she later explains). The leading character, Robledo (Moreno) accuses her of tempting not only himself, but also the men he works with in Argentina. The vehemence with which the men in this film damn her is interesting because as a temptress, she’s actually quite passive. There’s less a sense that she’s going after these men than there is that she’s going through the motions of what they want and expect of her. Often men see her for the first time as she’s descending a staircase, as if she’s both literally and figuratively lowering herself to where they want her to be.

It’s also curious that there aren’t any women in the film who condemn her. It’s only the men, the ones who project one image onto her and then are disappointed upon finding that it’s false, who accuse her of villainy. Robledo tells her that men die for her. “Not for me,” she replies, “for my body.” How can a woman who is viewed as an object, and is therefore inherently passive, also be accused of actively driving men to their deaths? They aren’t dying for her, they’re dying for themselves, for the idea they have of themselves through the dream of having her. The lighting is indicative of the way the men see her: she’s lit so that she seems to glow in contrast to the men occupying the room with her, who aren’t lit so softly. We’re seeing her as they see her, as an alluring, angelic being who stands out against everything else in the room. But none of these men see Elena the person, the thinking, feeling being behind the image. She’s just a body and a face for them to obsess over.

Garbo is very effective in the role, even though she apparently hated making the film. Her mentor, Mauritz Stiller, was the original director and was fired after two weeks of production. Niblo replaced him and he and Garbo had difficulty communicating. He also re-shot all the scenes previously done by Stiller and made the cast and crew work brutal hours (watch the flood scene and you can see how exhausted Moreno and the extras are) in order to complete the film in four months. But Garbo remains luminous – you can understand why these men fall all over themselves for her. Her best moments, however, are at the end of the film when Elena has fallen on hard times and is a drunkard wandering the streets. As an actress, she pulls these scenes off very well.

The ending is stark and sad – Elena, the temptress, is punished for her wanton ways even though she voluntarily gives up Robledo so that he can focus on rebuilding the Argentine village. She’s punished, essentially, for what other people have projected onto her, rather than for how she actually behaves. There’s an alternate ending as well, a happier one which sees Elena end up with Robledo. It rings false in comparison to the other ending, the one that’s sad but fits the overall arc and attitude of the film.

Posted by Norma Desmond at 5:10 PM