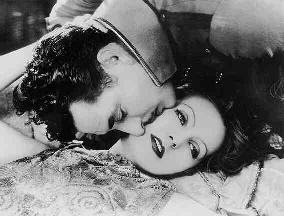 Despite plot points you can see coming a mile away, this is an incredibly watchable film. Gilbert and Hansen play Leo and Ulrich, two childhood friends who find themselves at odds when they fall in love with Garbo’s character Felicitas. It’s a standard story that is salvaged by the chemistry between Gilbert and Garbo, and by the subtextual relationship between Leo and Ulrich.

As in The Temptress, Garbo appears here as a young woman married to a much older man (Marc McDermott who, incidentally, played her lover Fontenoy in The Temptress) and falls in love with a younger one (Gilbert). The discovery of the affair leads to a dual in which Leo kills the husband and then is sent by the army to spend five years in North Africa as penance. Before he goes, he asks Ulrich to look after Felicitas, not explaining the true nature of their relationship, instead letting Ulrich think that he simply feels guilty about making her a widow. Three years later, Leo returns, his sentence having been reduced through some intervention by Ulrich. He arrives at the train station and is met by Ulrich and Felicitas… and finds out that they’ve married. The rest of the film focuses on Leo’s struggle between his desire for Felicitas and his love for Ulrich, and Felicitas’ struggle between the comfortable life Ulrich can provide for her, and her supposed love for Leo. The film culminates with another dual, this one between Leo and Ulrich.

The interesting thing about this film is that, despite the fact that both Leo and Ulrich purport to be in love with Felicitas, it is Leo and Ulrich who are the real romantic couple of the story. Several times they embrace and each time it looks as if they’re a second away from kissing. Early in the film Leo and Ulrich are on a boat sailing home. Leo is contemplating a flower that was given to him by Felicitas, whom he met briefly at the train station. Ulrich looks at him longingly and points out an island in the distance, calling it The Island of Friendship. When asked by Leo’s mother why they call it that, the film flashes back to when they were children. Leo, Ulrich and Ulrich’s sister, Hertha, went to the island where Hertha was adorned in garments made to look like the white robes of a priest or minister. Leo and Ulrich have her bless them, then cut themselves to become blood brothers (at the risk of being crass, it’s their first consecrated exchange of bodily fluids). Then, under the watchful eye of Hertha/the minister, they exchange a vow to be together until death. This is a marriage ceremony. When Felicitas comes between them, she’s not simply breaking up a friendship, she’s breaking up a marriage. Later, after Leo decides that he can’t be around Ulrich and Felicitas because of his feelings, she comes to him and says, “Leo, you must come back to him.” Later still, Leo and Ulrich are back on the island about to engage in a dual. Ulrich comes to his senses and they move into an embrace. In the same place where they exchanged vows, Ulrich now tells Leo (whose hand he is holding) that he feels as if a veil has just lifted. The film ends with the two of them, still embracing, on the island.

Garbo gives a solid performance (this one is much more vibrant than her performance in The Temptress, perhaps because she’s playing a more active character), as do Gilbert and Hansen, and the chemistry between Garbo and Gilbert (who began a tempestuous affair during filming) is electric. Their early scenes together, before the duelling and before Ulrich gets involved, are especially good. There is a beautifully lit scene where they’re in a garden and share a cigarette – they way they look at each other, the way the cigarette passes from her lips to his, the way she blows out the match that illuminates them – it’s all perfect. He may not have survived the transition from silent to sound, but there is definitely something about John Gilbert that is commanding enough that he shares the screen with Garbo, rather than being dwarfed by her presence.

As with The Temptress, there is an alternate ending to this film. In the other ending, Leo ends up with Hertha. Once again, the alternate ending rings entirely false when considered against the rest of the movie. The film ends as it should – Leo with Ulrich, true love prevailing.

Posted by Norma Desmond at 5:07 PM