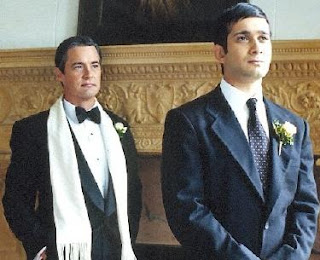 Where to begin describing this movie? It’s a romantic comedy. A gay one, in fact. And it’s a family drama. And it’s the story of a lonely little boy who took solace in films and grew into a man for whom Cary Grant is the ideal imaginary friend. But, when you look at the film as a whole, you see that these things are just the beginning, the starting point for a story that runs deeper.

The beginning of the movie sets up a juxtaposition of the real and the artificial. Cary Grant (MacLachlan) addresses us, the audience and then skates with Alim (Mistry) on a frozen pond. But, it isn’t really Cary Grant who is addressing us, it’s Alim’s vision of Grant (who, incidentally, employed a little artifice of his own when he changed his name from Archibald Leach to the more movie star sounding name by which we know him), the one he’s built up and created in his head. And the ice that they’re skating on is part of the set on the film where Alim works. The interplay of real and unreal continues as we watch Alim create an artificial life for himself for the benefit of his mother, Nuru (Mathew), in order to hide the reality of his relationship with Giles (Holden-Ried). When his mother flies from Canada to London to meet his “fiancée,” his pretend life becomes more elaborate and he presents Giles’ sister as his bride-to-be. Of course the truth eventually comes out and the romantic relationship breaks up – all standard movie stuff. But, in the process of this happening, we begin to see beneath the surface story to the real story that’s being told.

After Nuru’s husband died, she left Alim with her sister and brother-in-law in order to go to London herself to try to make it. Young and full of life, she wanted to be like Audrey Hepburn, only to discover that London didn’t want an Indian Audrey Hepburn. During the course of an afternoon spent with Giles, we get a greater sense of her resentment and her disappointment and even to a certain extent her fear of being rejected (again) by a predominantly white culture (this last is most apparent in the scene where she shows reluctance to even go into a store to try on the “Audrey Hepburn outfit” displayed in the window; she doesn’t feel like she belongs in that outfit, in that world). Her anger is made evident in an early speech to Giles after he eats the breakfast she was preparing for Alim. He asks if they can start over, be friends. She says no, she’s reached her quota of friends, ending, “People like you probably don’t hear that often.” You could say that Giles is wrong for assuming that the breakfast was for him, but think about this: why did she let him eat it? Why didn’t she tell him that it was for Alim only? She obviously isn’t shy of him. Has she gone out of her way to create a reason to be angry with him? I think that’s a strong possibility.

And look now at Alim. In many ways he has succeeded where his mother failed. He’s made a place for himself in a predominantly white world, but in doing so he’s had to reject many aspects of his own heritage. He’s distant from his family, not just geographically, but psychically, and the person he most identifies with is a white movie star. If the Cary Grant character is a projection of his own thoughts and point of view, what to make of the following scene: Alim returns to Canada to attend his cousin’s wedding. In a darkened hallway, Cary Grant appears to him dressed in an elaborate costume, explaining, “It’s an Indian wedding, so I thought Gunga Din…” Does he only see his culture as filtered through depictions in Hollywood films and, thereby, from the point of view of white men? Alim’s struggle in the film isn’t really with coming out, it’s with trying to balance the two sides of his psyche.

This is a very funny film (my favourite scene: Alim’s uncle sees him and Giles hugging. He shrugs, hugs them both then asks, “Was there a hockey match? Did Canada win?"), and also a moving one. Watch the scene where Alim comes out to his mother by showing her a photo he’s taken of Giles. He does this out of anger because he’s irritated at the bond his mother has started to make with Giles, but underneath that you can see that his anger is just a cover for his fear that she’ll reject him. He’s rejecting her first. Watch the way that she understands what he’s getting at without him quite saying it, and then… lives up to his fears and rejects him. Mistry and Mathew give solid performances as the son attempting to break away, but longing to be pulled back and accepted, and the mother who, for all her faults, is really just being protective of him, afraid that his failure to assimilate will wound him as deeply as it did herself. MacLachlan, too, should be noted for his performance. His Cary Grant impression isn’t perfect, but it’s not supposed to be - he’s not playing Cary Grant the man, he’s playing Cary Grant the persona, the idea that Alim has of him from his movies (the title of this movie, Alim’s movie, if you will, is a play on the title of a Grant film, That Touch of Mink). It’s perhaps fitting, then, that this film has a conventional movie ending. For someone as wrapped up in the magic of Golden Age Hollywood as Alim, it couldn't be any other way.

Posted by Norma Desmond at 5:37 PM