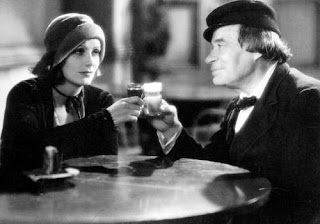 There are two versions of Anna Christie, both starring Garbo. One is in English, the other, filmed directly afterwards, is in German. The English version has been better preserved and restored, but in nearly all other respects the German version is superior.

That Anna Christie is adapted from a stage play is obvious – the films are predominantly composed of long scenes of dialogue taking place on a handful of sets (namely: a bar, a fair, the inside of a barge, and the outside of a barge). This isn’t in and of itself a bad thing, but it does make them seem less cinematic and more like stage performances that have been filmed. This is especially true of the English version, which is very static. The English version also uses title cards in order to mark passages of time and move the story from one scene to another, which is problematic in that it gives the impression of the story being stuck somewhere between a silent and a sound film, between stage and screen. The German version has no inter-titles and moves more fluidly than it’s English counterpart.

Garbo is, of course, Anna Christie a Swedish immigrant who has grown up on a farm in Minnesota and goes to New York to see the father she hasn’t seen since childhood. What we find out early in the story - but is kept from Anna’s father and her love interest Matt – is that she was raped on the farm and ran away to the city where she became a prostitute. Garbo gets a couple of great monologues and does well in this de-glammed role. Her performance in the German version is better than that of the English one, perhaps because she was more comfortable speaking in German than she was in English, or because, filming the German version directly after the English one, she had grown more comfortable inhabiting the character. As for the rest of the cast, the English version has one thing the German version doesn’t: Marie Dressler (playing the drunken, live-in lover of Anna’s father). Dressler, who is always fabulous, brings a warmth and depth to the role that Salka Viertel is lacking in the German version. As Anna’s father, Chris, Hans Junkermann is much more understated than George F. Marion, who is more a caricature of a Swedish sailor than anything else. As for the actors who played Matt… I’m of two minds about this. One the one hand, I thought that Garbo had better chemistry with Theo Shall, but on the other hand, I thought Charles Bickford was more believable as the loutish sailor. There’s something about Shall that’s just too soft to pull off the role; at times he almost seems as if he’s scared of Garbo.

Aside from the unglamorous nature of the role, the film departs from other Garbo vehicles in a couple of other keys ways, specifically in that it doesn’t involve a triangular love story (although it does involve a triangle of sorts), and no one dies as a result of their lust for Garbo. Chris and Matt do fight over Anna, Chris because he doesn’t want her to get involved with a sailor who will shatter her innocence and take her away from him, and Matt because he’s fallen in love with Anna and wants to marry her. At the beginning of the film, Chris is reluctant to take Anna out to sea because he’s worried that exposure to that kind of life will be dangerous for her and that she’d be safer on land. The irony is that Anna’s innocence has already been taken from her on land, and the time she spends with Chris at sea is the only time she is “safe” from other men. And then Matt comes along and, despite her claims that she hates men, Anna falls in love with him. You can chart the progression of their relationship through the cinematography and Garbo’s wardrobe. Matt and Anna meet in the fog and he’ll maintain an indistinct vision of her (he sees her as a delicate, untouched flower) until her confession to him (the fog will return again at the end, as Anna and Matt are planning for their future happiness). During the primary romantic scene, which takes place at a fair, Anna is wearing white, drinking milk instead of alcohol because Matt doesn’t think she drinks. She’s living up to his vision of purity and goodness, at least on a superficial level. Later, when she reveals her past to him, she’s wearing black, a sign of her “badness” and perhaps a sign that she’s already mourning her relationship with Matt, which she knows must end once he learns the truth.

Chris and Matt fight over Anna, each wanting to possess her and maintain their pure images of her, until Anna can’t take it anymore. “What am I?” she asks, “a piece of furniture?” She refuses to be the object of either. “I belong to myself,” she tells them just before relating her sordid history to them. Her relationship with Matt is interesting in that he tries to be so possessive of her (he doesn’t so much ask her to marry him as inform her that they’re going to get married) but she simply doesn’t allow him to succeed. The balance of power is maintained in her favour perhaps because while he has certain illusions about her, she doesn’t have any illusions about him (when she informs both men of her prostitution she states that she worked “in a house like the kind you’d go to.” She knows these men, but they only have ideas about her).

This is an adequate film, if not an especially good one. However, I highly recommend it on the strength of Garbo’s performance.

Posted by Norma Desmond at 4:59 PM

Why is everyone so negative about this film. Its quaintness, and NY harbor give it the simply flavor it needs for O'Neill's play about very regular people with troubles.

I have the whole Garbo set, and this is the best--not like I got it at the dollar store!