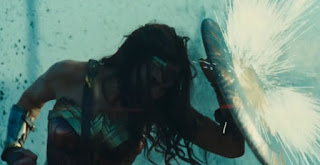 #10: No Man's Land, Wonder Woman
And with that, a hero is born. If you're a man, it may be difficult to fully understand why this scene spoke to so many women; after all, male characters get to do things like this so often that it probably feels perfunctory to this kind of story. The opportunity for women to see female characters on the big screen get to be the hero has been fewer and far between. This isn't just a crucial moment in the movie, where Diana/Wonder Woman gets to show what she's capable of and the men around her decide it's worth following her lead, nor merely an encapsulation of everything that the character stands for - compassion, fearlessness, inspiration - or even just an instantly iconic pop culture moment. It's a moment that meant a lot for a lot people seeing it, and isn't that what going to the movies is all about? 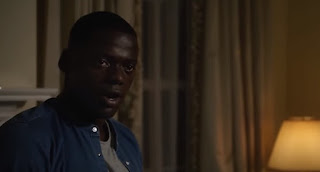 #9: Chris Finally Decides to Get Out, Get Out
There have been red flags galore for Chris who has, up to this point, met all of them with the sort of polite biting of the tongue that the offended do lest they make the offenders feel uncomfortable (the social contract favors those who behave like assholes). Here he's finally reached the point where he can't keep making excuses for the weird things going on around him - except that he's talked himself into believing, contrary to the evidence, that his girlfriend is on his side. This scene, in which the fact that his girlfriend is not on his side becomes increasingly undeniable and he comes to terms with the fact that she's not going to help him escape, is marvelously played by everyone involved as all pretenses drop completely and only the horrible, ugly truth remains. 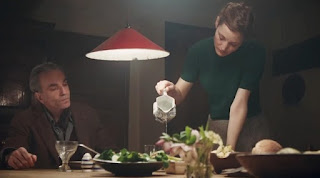 #8: The Omelette, Phantom Thread
I can't even put into words how much I love the way that Daniel Day-Lewis plays this scene. It's so hilariously playful (weirdly so, given what's happening), with his character treating his wife as if she's a delightful little scamp for what she's just done (which, again, is not something most people would find delightful). This is a scene that starts out at the height of tension, as Vicky Krieps' character decides to take drastic action and Day-Lewis watches her from afar. Realization dawns on his face and the pieces begin to click into place and then comes the moment of confrontation, which plays out in a way you don't expect but which ends up being one of the keys to the film. It's just an absolutely fantastic scene. 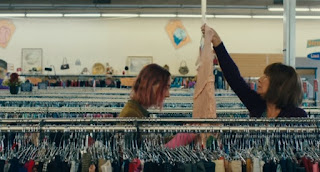 #7: Dress Shopping, Lady Bird
I think you could choose just about any scene between Saoirse Ronan and Laurie Metcalf from Lady Bird and make a compelling argument for it being one of the best of the year. There's such specificity to their interactions with each other, to the way that love and annoyance are so intermingled that they become indistinguishable, to the way that they can go from getting along to fighting (or vice versa) with just one wrong word or one triggering expression. This scene showcases that volatile dynamic to great comedic effect, with Metcalf's character making a passive aggressive comment that incites an angry back and forth that is broken up by the discovery of a dress they both agree looks great. 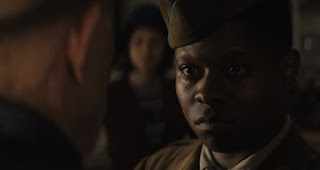 #6: General Store, Mudbound
Though it's told in several voices from several perspectives, the primary story of Mudbound is that of a young black man who fought for his country and then returns home to be met with disdain and hate. This scene, in which that young man stops at the local general store on his way home and is taunted and demeaned by two white men who object to him trying to leave through the front door then told by a third to do as they say because they "don't want any trouble," not only sets in motion the conflict which will lead to the film's great tragedy, it also highlights how white supremacy functions: through the hatred of some, the complacency of others, and the gaslighting of victims through the suggestion that their behavior is what will determine whether or not there's any "trouble." It's not just a well performed and unfolded scene, it's a scene that defines some of the film's most important themes. 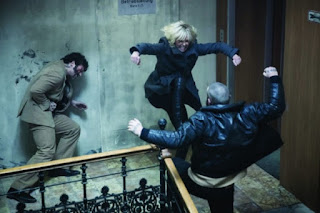 #5: The Long Fight, Atomic Blonde
This 10 minute sequence, shot so that it appears at first glance like it unfolds in a single take, is the best fight sequence of the year. It's vivid and thrilling and unfolds in a way that feels more grounded than most fight scenes. This isn't a battle between inhumanly strong people with impossible levels of endurance. It's a desperate combat sequence in which the main character grabs at anything she can get her hands on to give herself an advantage and is left collapsing with exhaustion at the end. Director David Leitch makes sure the audience feels every punch and kick as the scene puts Charlize Theron's Cold War-era spy through the wringer.

#4: The Missing Wine, Lady Macbeth
This scene is really Lady Macbeth in microcosm. The master of the house has returned and is joined for dinner by his daughter-in-law. He wants a specific bottle of wine and the housemaid has to inform him that there's none left. How can that be, he wonders. What follows is a demonstration of how the stratification of power is maintained without even being directly addressed. His daughter-in-law is clearly drunk and clearly the culprit, yet the maid can't come out and say that because if the daughter-in-law denied it, he would side with her and the maid would be punished. The maid knows that. The daughter-in-law, who spends the scene all but coming out and daring the maid to try it, knows it. It's a great scene of things unsaid, the leveraging of social power, and of the impossible position of women of color in a society built on white supremacy. 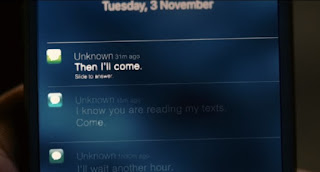 #3: Text Messages, Personal Shopper
It may sound innocuous, but this is genuinely one of the more terrifying sequences of the year. In it, Kristen Stewart's Maureen receives a series of mysterious text messages, which she suspects may be coming from her deceased brother. As the messages increase in urgency and become more threatening in their tone, we get the sense that Maureen is being led into a trap but are helpless against her curiosity to find out the truth. It's a masterfully unfolded sequence that puts you on the edge of your seat as you watch how it plays out (which will ultimately solve one mystery and create another). 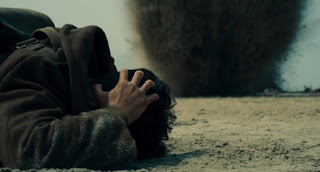 #2: Bombardment on the Beach, Dunkirk
Dunkirk is a film that tries to convey the chaos of war and the pure luck of survival, and this scene captures both along with the primal, animal terror of being unable to defend yourself as German planes bear down on the beach firing on the soldiers who are like sitting ducks, with nowhere to run or hide, nothing standing between them and death but pure chance. It's a pulse-pounding sequence that gets the adrenaline running high - a state the audience will remain in for the rest of the movie. 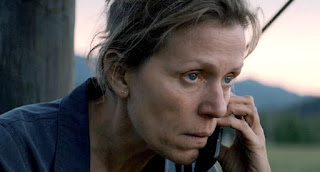 #1: Final Scene, Three Billboards Outside Ebbing, Missouri
Three Billboards Outside Ebbing, Missouri is about rage that cannot be denied and yet has no place to properly spend itself. It's an angry movie centering on angry people. The angriest are Mildred Hayes and Jason Dixon, who decide at the end to enact a bit of vigilante justice in an effort to balance the cosmic scales. The film ends with them taking a road trip to do just that, but the closer they get, the more their rage begins to subside and be replaced by something more like sorrow. That last quiet, somewhat funny, conversation between stars Frances McDormand and Sam Rockwell is the perfect lowkey ending to a film that has unfolded like a hurricane up to that point.
Posted by Norma Desmond at 8:00 AM