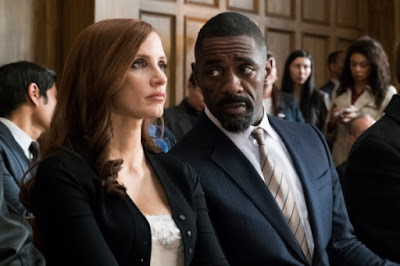 If there's one thing you can say for Aaron Sorkin, it's that you have to go out of your way to feel bored watching one of his stories unfold. That's because there's so much going on and everything is moving so fast. Molly's Game, his latest and his directorial debut, runs to almost 2 and a half hours but it doesn't feel nearly that long because it's told in such a nimble, dialogue and incident packed fashion. It also manages the impressive feat of making poker, which may be an interesting game to play but isn't a particularly interesting game to watch, feel entertaining from the distance of an observer (though that may be because while there's a lot of talk about poker in the movie, there's not necessarily a lot of time spent watching it). While Sorkin, a writer known for dynamic screenplays, hasn't historically been celebrated for his ability to write female characters, he's been gifted here with a real life person with a compelling story, and an actress who is so at home reciting his sharp, rapid-fire prose that it feels as if she's already been doing it for a lifetime.

Molly's Game begins with a digression as its eponymous protagonist (Jessica Chastain) delivers a monologue, via voice over, about a poll in which athletes were asked about the worst thing an athlete could face and provided answers such as losing Game 7, being swept in 4, and coming in fourth at the Olympics. This monologue is apropos nothing, really, except that she - a former competitive skier who crashed out during an Olympic qualifying competition, losing in an instant, and as a result of a freak occurrence, the dream that she had spent her childhood and young adult life working for - would like to address the person whose answer was "coming in fourth at the Olympics" in order to respond with a "Fuck you." Through the course of the film, Molly will say "Fuck you," literally and figuratively, to a lot of people: to the boss who abuses her, who she manages to out maneuver by starting her own poker game, to the celebrity player at her games known as Player X (Michael Cera), who out maneuvers her but, instead of breaking her, merely inspires her to move on to bigger things, to the players at her games who have a hard time understanding that just because she's a woman and she's there doesn't mean she wants to have sex with them, to the mobsters who want to take a piece of her business and the prosecutors who want to back her into a corner and force her cooperation, and to the father (Kevin Costner) with whom she has always had a strained and contentious relationship.

But, to get back to the start of the story itself, it begins in Los Angeles where Molly, working as a personal assistant, is brought into the backroom poker business by her boss, who runs a game frequented by celebrities, including Player X. When her boss begins to get anxious about his own precarious financial situation, he focuses his anger on Molly and changes the terms of their working relationship to something that no one in their right mind would accept. He does this because he takes it for granted that he has all of the power in their relationship and that he can abuse that power as he sees fit, but he underestimates her as an opponent and she ends up taking his business and starting her own. She's successful with her own game, but once again runs afoul of a male ego when Player X, a man who at one point declares that he participates in the game not because he enjoys playing poker but because he enjoys ruining lives, decides that she owes her success to him and exercises his power by taking her game away from her. In the aftermath she moves to New York where things both get better (she starts a new game from scratch and enjoys total control over it as it's growing) and worse (she becomes addicted to drugs, comes into contact with the mob, and gets herself on the radar of the FBI). Eventually she's arrested, which brings her into the orbit of lawyer Charlie Jaffey (Idris Elba), who wants to keep her out of prison but can't see any way of doing that without having her name names, which she is adamantly unwilling to do.

Molly's Game alternates largely between scenes of Molly and Charlie in his office, her telling him her story and the two of them debating her options and arguing over her decision to keep the names of her players to herself, and extended flashback sequences to the events of Molly's life leading up to the crisis she finds herself in. This back and forth structure is formulaic on the face of it, but Sorkin's writing is so fast paced and intense that the story, its structure, and its dialogue never feel anything less than vital and alive. It helps, of course, that virtually every scene (the only exceptions are a few in which child actors play young Molly Bloom) features Chastain, who goes at the material like a razor blade, slicing scenes up this way and that. In her hands the character is a formidable one, even when she's seemingly doing nothing at all (like when she's silently, but oh so disdainfully, enduring her boss' tantrums while plotting her escape). As a woman in a world populated largely by men she's constantly being treated like an object of potential sexual gratification (even the prosecutors, in their interview with her, find it necessary to ask if she was working as a prostitute in addition to running a poker game because it's apparently inconceivable that a woman might get ahead on the basis of her wits rather than her body), subjected to overtures that sometimes require a threat to convince the man to back off, but which she increasingly dismisses with something akin to boredom because it becomes such a commonplace part of her day.

Chastain's Molly Bloom is a woman in control - that notion is embedded in the film's core, with Molly refusing any suggestion on Charlie's part that amounts to a passing of the buck and pretending that she's more innocent than she actually was - but she's not invulnerable and the film doesn't celebrate her because she's indomitable, but because of how she's able to gather herself back together after defeat and keep moving forward. She's a flawed person and a person who meets several challenges and she's deeply compelling throughout thanks to Chastain's performance. I've not read the book upon which the film is based, so I have no idea how much of what's on screen actually accords with what happened (the end of her court case, in particular, almost seems too easy and too "cinematic," but of course life is so often stranger than fiction), but I know that the film is incredibly entertaining and features one of Chastain's best performances to date. Whatever Sorkin does next, he should find a way to put her in it.
Posted by Norma Desmond at 8:00 AM