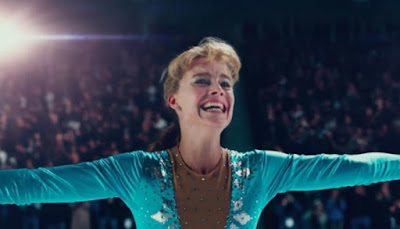 Late in I, Tonya the film's eponymous protagonist wonders why it can't just be about the skating. It's a fair question in the specific context of the scene, wherein she's told that her athletic prowess is irrelevant because she's doesn't fit the image that US Figure Skating wants to put forward on the world stage, but it's a fair question in a larger sense, too. After the film was over, one of the images that stayed with me was a shot of 4 year old Tonya skating and how happy she was to be doing it. In the film's telling of her story, that was probably the last pure and unqualified moment of happiness she ever experienced and it makes you wonder, "Why couldn't it just have been about the skating?" or any sport for any kid who feels happy playing it. Why couldn't it have just been a thing that she enjoyed doing, rather than the thing that she was repeatedly told was the only thing that mattered and the only thing about her that gave her any value? I wouldn't say that I emerged from I, Tonya feeling like Tonya Harding is a hero, but I certainly came out of it with more sympathy for her than I expected because if even a quarter of this story is true then hers was a life that was always going to be marked by tragedy and ruin in some capacity or other.

Told in the form of a documentary with the main players in Harding's personal life - her gorgon of a mother, LaVona (Allison Janney), her ex-husband, Jeff Gillooly (Sebastian Stan), her former coach, Diane Rawlinson (Julianne Nicholson), and Harding herself, played by Margot Robbie in what one might term a "star making performance" if she weren't already a star - breaking up the action with talking head interviews to comment on the events being depicted, sometimes to debate their very veracity, and sometimes having characters break the forth wall in the midst of a scene to discuss how much of it is true, I, Tonya leans heavily into a sentiment expressed by its title character that there's no such thing as "the truth," only versions of the truth. That is, of course, exactly the sort of bullshitty thing someone would say when they're determined not to be held accountable for anything. Truth is not a nebulous concept and when someone tells you that there's no such thing as "the truth," what they're really saying is that they can't deny that their hands aren't clean but aren't about to admit that they're dirty, either.

Largely sympathetic to Harding, the film tells a story about a girl who is physically and emotionally abused by her mother and grows up to be a woman who is physically and emotionally abused by her husband. At a young age she develops a love for figure skating and is fortunate to have enough natural talent that it can be nurtured and developed to take her to the level of a world-class talent, but nurturing is the last thing she'll actually receive as the governing body of her sport actively works against her advancement because they don't want someone like her to be the face of the sport. She's rough around the edges and what they want is someone who can project an image of elegance, and the sport's resistance to her success becomes another barrier that she has to break through in order to get to the Olympics and obtain the endorsements that will provide her with some measure of financial security for the future. While she's fighting for a spot at the table, her husband comes up with a plan to level the playing field a little bit by removing her competition so that US Figure Skating has no choice but to put their support behind Harding in order to contend for a medal at Lillehammer. The plan is simply to scare Nancy Kerrigan away by sending her death threats, but of course that's not actually what ended up happening.

In I, Tonya's telling of it, Harding is a casual, ambivalent participant in the plan to scare Kerrigan with death threats and the escalation to a physical attack is the result of the actions of a rogue agent (Gillooly's friend, Shawn, who fancies himself a man of intrigue and danger) and something that neither Harding nor Gillooly knew was going to happen until it already had. That's entirely plausible, but what the film sort of glosses over is that trying to psychologically torture a rival to prevent her from competing is still a pretty bad thing to do. There are numerous reasons one can and should feel sympathy for Harding, particularly as she's depicted in this film, but the thesis that she's somehow just as much a victim of this incident as Kerrigan is bizarre. It also sets the table for a moment that the film neither earns nor can get away with, when Harding turns to the camera and declares that with her foray into infamy in the aftermath of Kerrigan's attack, "It was like being abused all over again. Only this time it was by you. All of you. You're all my attackers too." It's a moment that doesn't work for two reasons, the first being that if you remember the time period of 1994-2004, then you know how hard Harding worked to stay in the public eye and trade on her infamy for profit. Yes, one can argue that her options were limited by her lack of education and training and by the fact that she was banned from involvement in professional skating, but as the vast majority of us know, it actually is possible to earn a living away from a camera and a spotlight (though perhaps you can't earn it as fast). It's also worth noting that while Harding certainly did become a pop culture joke, so did Kerrigan. How often in the last 24 years has Kerrigan's cry of "Why?" after being attacked (which, incidentally, is the only line that the Kerrigan character utters in the film, to my recollection) been parodied? And she was the actual victim.

Given the way that the film treats Kerrigan - who is pushed as far to the periphery as possible by the narrative, except when it's giving Harding the opportunity to criticize Kerrigan's attitude upon winning Silver while praising herself for being happy to come in 8th - the moment almost collapses under the weight of its irony, and that's before you even take into account the second reason it doesn't work, which is that the film itself spends a not insignificant amount of its time inviting the audience to laugh at its protagonist (which is why I don't believe that the irony of this moment is intentional). I, Tonya is sympathetic to Harding and, in all likelihood, most people who watch it will emerge feeling some sympathy for her, too, but in leaning so heavily towards camp, it plays for laughs some of the very things that it will later admonish the audience for laughing at. You can't have it both ways. You can't be this glib and then chastise your audience for not taking it seriously enough.

Despite this caveat, I actually did like I, Tonya and I think that it has some valuable things to say about class and the cycle of abuse. Harding was a gifted athlete, which should have been enough to achieve success in her sport, but the deck was stacked against her both by the fact that her sport determines winners based not just on what a competitor does but on how they look doing it, and by the fact that she was poor. People talk a lot about the genetic advantages that certain athletes have over others, but we rarely talk about the economic advantages that some athletes have that allow them to achieve a level of success that others cannot. The fact is, you can have all the natural ability in the world but if you can't afford to enroll in the sport and buy the equipment, you're not going to get far. As depicted in the film, Harding is a woman who is trapped. She's trapped by poverty, which makes it difficult to meet the aesthetic demands of her sport. She's trapped by the fact that her parents have had her drop out of school in order to devote herself to training, making her sport the only option she has to raise herself out of poverty. She's trapped by the fact that she's already sacrificed so much to pursue her athletic dream that giving it up means that she has nothing. She's trapped by having grown up understanding that relationships are violent. She's trapped by a system that doesn't help her extricate herself from an abusive situation and which, in at least two scenes, sometimes actively pushes her even further into harm's way. Finally she's trapped by her own infamy, reduced to little more than a thuggish caricature in pop culture.

It's easy to watch the film and feel empathy for Harding, both because the film does such a thorough job at showing how the deck has been stacked against her and because Robbie does such an excellent job at bringing a sense of fullness to the character. She's a tragic figure in many respects - abused by those closest to her and making excuses for their behavior, unable to extricate herself from these toxic relationships - and a maddening figure in many respects - the sort of person who can never really accept accountability for anything, always finding a way for whatever she's being called to account for to actually be the fault of someone else - but above all she feels real. It's a gritty, dug in deep, performance for which Robbie very much deserves every accolade that has come her way.
Posted by Norma Desmond at 8:00 AM