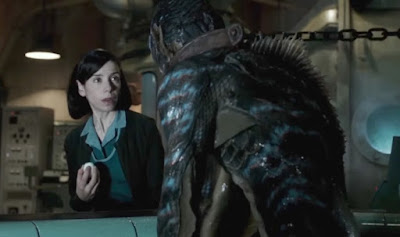 Tale as old as time, song as old as rhyme, beauty and the beast. There's nothing new about stories of women seeing past the beastly exterior of a monster and falling in love with the soul that exists beneath the surface - movies called "Beauty and the Beast" are, at this point, a subgenre in and of themselves - but a filmmaker as creative as Guillermo del Toro, who is dedicated to mixing the sinister with the beautiful, leaving you at once enchanted and unsettled, is able to make an old formula feel fresh. The Shape of Water is a wonderful fairy tale for adults, impeccably put together on a visual level, masterfully unfolded on a narrative level, and built around one great leading performance and four great supporting performances. If you only see one movie this year about a woman falling in love with a fish man, make it The Shape of Water.

del Toro and co-writer Vanessa Taylor set the action in the early 1960s, all the better for charming period detailing in the production elements and Cold War-era paranoia in the narrative ones. The story centers on Elisa (Sally Hawkins), who was left mute as a result of an injury inflicted upon her as an infant and works as a janitor at a government laboratory in Baltimore. She lives above a movie theater but will only step inside it once during the course of the film and instead watches classic films on TV with her neighbor Giles (Richard Jenkins), a closeted artist who, like her, is deeply lonely. At work Elisa's friend, Zelda (Octavia Spencer), makes up for Elisa's lack of speech by filling their interactions with chatter, though she falls just as silent when one night a mysterious specimen is brought in by Col. Richard Strickland (Michael Shannon), who later comes stumbling out of the room where the creature is being kept, covered in blood and missing two fingers.

Strickland has dragged the creature - a humanoid amphibian - back to the States from South America, believes that possession of the creature will give the US a leg up in the Cold War, and wants to immediately vivisect it. For Elisa, who quickly bonds with the creature in secret as she teaches him to communicate with sign language and through music, this is an unthinkable fate. As she plots to break the Amphibian Man out of the facility, she finds an unlikely ally in Dr. Hoffstetler (Michael Stuhlbarg), a scientist at the lab who is in awe that a creature such as the Amphibian Man can exist and would rather not see it destroyed just for the hell of it. As in all fairytales, the line between good and evil is pretty firmly drawn (though I suppose that one could argue that the context around Hoffstetler puts him in something of a grey area), but it's what the characters each represent that makes the final battle feel resonant to our time rather than ephemeral, its meaning disappearing faster than you can say, "Once upon a time."

The Shape of Water is a love story, but it's also a story about outsiders and institutional power. The Amphibian Man, Elisa, Zelda, and Giles are all "othered" by society, one for being gay, one for being black, one for being differently abled, and one for being, well, a sea creature. Strickland is the center of power personified, a man who abuses his power in big ways (taking an electric batton to the Amphibian Man just because he can) and smaller ways (forcing Hoffstetler to walk out of his office and then walk back in a more subservient way, again just because he can), a man with no qualms about engaging in physical violence or in psychological/sexual violence (as in a scene where he corners Elisa in a room, makes it clear that she's an object of sexual fascination for him, and uses his size to intimidate her and make it clear that he's going to do whatever he wants and she won't be able to stop him). Strickland is symbolic of what power has long looked like and when the other characters oppose him, they do so by chipping away at the signifiers of that power. His car, a shiny new Cadillac which he's informed is the ultimate status symbol for the successful male, is destroyed. His family - the stereotypical nuclear family of the 50s/60s - is undermined by his growing obsession with Elisa. His job - for the government, no less - is undermined both by the escape of the "asset" that he's worked so hard to bring home and by the revelation that there is a Soviet spy in the lab's ranks. None of these things completely strips him of his power, but the film makes it clear via his injured hand, which loses two of its fingers courtesy of the Amphibian Man which are then re-attached, that that power is corrupt. The re-attached fingers don't quite take, multiple characters comment on the smell coming from them, and later in the film they fully turn black. Strickland is literally rotting on the inside, representing the rot at the core of a society that would work to exclude and diminish everyone who fails to conform to its limited image of what qualities and physical characteristics are worth revering.

This idea of social rot isn't restricted to Strickland, though he is the film's most prominent symbol of it and even at one point refers to the notion that humans are made in the image of God but tells Zelda that God probably looks a lot more like him than like her. There's also a man that Giles has a crush on who works at a diner. When Giles signals his interest, having misinterpreted a sign from the other man, he's angrily rebuked and banned from the establishment, something which happens in basically the same breath as a black couple being told that they aren't welcome there, either. The ideas of conformity (the diner is part of a chain) and rot (the diner is known for its key lime pie, which is suggested to be inedible given Elisa's reaction to it and the fact that Giles has been ordering it in order to have an excuse to talk to the man, but never actually finishes it, judging by the fact that his fridge is full of partially eaten slices of pie) are woven into the setting, which in this scene makes explicit what is unsaid but understood: this is a world made for heterosexual white men, and those who don't fit that ideal will be made to live on the margins if not fully in hiding.

There's a lot going on beneath the surface of The Shape of Water, but it's not a film that feels at all like an academic exercise in dissecting meaning from scene to scene. From its dreamy opening scene, which firmly establishes the story as a fantastical tale being recounted to the audience by a third party, to its violent but sentimental ending, The Shape of Water so easily captivates that you only start debating what it all meant afterwards. It's a beautifully assembled film, the on screen world fully realized by del Torro and his team to seem at once magical and squalid, and a magnificently acted one. Shannon, Jenkins, Spencer and Stuhlbarg all deliver great supporting performances that bring their characters fully to life, and Hawkins is extraordinary as Elisa. Though her character can't speak, you're never left in any doubt of what she's feeling because Hawkins so skillfully brings her interior life up to the surface in a performance of great emotion, humor, and incredible strength. Without Hawkins at its center, The Shape of Water might collapse by seeming impossibly silly; instead, for as weird as it truly is, The Shape of Water never feels anything but emotionally true. It's a fantastic movie which, despite its somewhat familiar story, feels like an original.
Posted by Norma Desmond at 8:00 AM