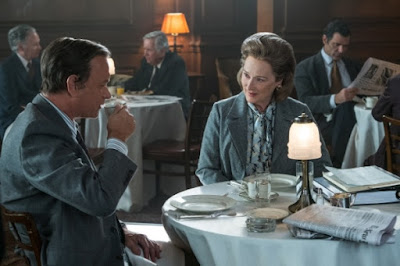 The Post is not a movie that will surprise you, but there's pleasure to be had in a classic tale told in a classic fashion. Is it accurate to the way things actually happened? I'm sure the New York Times would have something to say about that, and in the end I'm not sure that it matters, unless you want to split hairs over whether plot or theme represent what a film is truly about. What it tells is a well crafted story, one which is engrossing and often rousing, and which has been fashioned in a way to make it as relevant to the moment that we're currently living in as possible, even as it hits all of the expected beats. It leads with its talent - which is, of course, considerable both off screen and on, directed by Steven Spielberg and starring Meryl Streep and Tom Hanks - and lets that do most of the work. After all, how wrong could a movie with that triumvirate go? I'd say it doesn't really go wrong at all.

Streep is Katherine Graham and Hanks is Ben Bradlee, the publisher and editor in chief, respectively, of the Washington Post. Plot wise, the film is about the publication of the Pentagon Papers and the Nixon administration's attempts to prevent that information from being made public and revealing the extent to which multiple Presidential administrations had mislead the public about the situation in Vietnam. Thematically, the film is about a woman trying to navigate a man's world and how her agency and dignity are constantly under siege. She's talked over, dismissed, shut out, and treated like she doesn't matter, couldn't possibly know what she's talking about, and has nothing of value to add. Even Bradlee, played by that icon of American goodness Hanks, treats her like a chore that he has to endure rather than someone he should and, in fact, needs to take seriously because she's his employer.

We're accustomed at this point to seeing Streep play formidable women. It's less common to see her playing a character who is as uncertain and so easily intimidated as the Katherine Graham depicted in this film. She's a woman who has inherited an empire, her father having founded the paper and later handing control of it over to Graham's husband ("Says a lot about him," one character remarks about a son-in-law being given control of the family business. "I thought it said a lot about the time," Bradlee replies, somewhat uncharacteristically given his own attitude). Upon her husband's death she gained control, but her position isn't something treated with respect when she walks into rooms full of men. Instead, they treat her status and her presence as something to be humored as they talk around her, ignoring her when she tries to make a point, shutting her out of the conversation, and yet still somehow finding a way to make her the focal point of blame should there be any to be had (because, after all, if something is going wrong, it could only be because a woman is holding the power and doesn't know how to use it properly). For as much as the film is a classic tale about journalists doing the footwork to put together a dangerous story and going up against the Goliath that is the government, The Post is very much a story about a woman seizing agency and finding her voice. I'm sure I'm not the only woman in the theater who wanted to clap when Streep cuts off Arthur Parsons, a board member played by Bradley Cooper who in the film is chief among the men constantly shutting her down and infantalizing her, by saying, "I'm talking to Mr. Bradlee." She's saying, without actually saying it, stop interrupting me, stop talking over me, stop talking for me, stop acting like I don't matter. She doesn't say "Shut the fuck up" because she doesn't have to; her tone does it for her and I sincerely hope that this is the clip AMPAS uses for Streep during the Best Actress presentation.

That the film is really about how women are marginalized and have to fight for a place at the table is evident in some of the choices that the screenplay (written by Liz Hannah and Josh Singer) and Spielberg make. This includes the "moment of triumph" shot that films like this always feature, which here figures as a quiet moment when Katherine Graham, ignored by the press (who are busy surrounding the gentlemen from the New York Times), descends the stairs at the court house and is surrounded by young women looking at her reverently, a silent affirmation that she's just done something to strike a blow for all women; and it includes an exchange between Bradlee and his wife, Tony (Sarah Paulson), when he laments Graham's hesitation to give the okay to publish the story, arguing that he has just as much to lose as she does by taking on the Nixon administration, and she basically tells him that he's full of shit. He has some things to lose, sure, but they both know that in the end he would come out of the situation a winner because he would become a hero of his profession and would easily find another job if the Washington Post became a battle casualty. Graham, on the other hand, could lose everything and have no ability to come back from it. Even in defeat, Bradlee would be a legend, while Graham would be a footnote. And if you don't believe that, consider this: the sequel to The Post's story is the one told by All the President's Men. Everyone knows who played Bradlee in All the President's Men (but, in case you don't, it was Jason Robbards and he won an Oscar for it), but who played Katharine Graham? The answer is no one because Graham, despite being directly threatened by Nixon's Attorney General, John Mitchell, over Woodward and Bernstein's reporting, is not a character in All the President's Men. Recorded history is the story of men accomplishing things. The goal of The Post is to put a woman who has been previously erased from it back into the story.

The Post is not a great movie, but it's truly a very good one. Streep is excellent, which I realize is like saying ice is cold, but it's a fact here and should be stated. As Graham she delivers a deeply vulnerable and incredibly relatable (not the specific circumstances, obviously, as few of use are wealthy newspaper scions) performance that makes that triumphant descent down those court house steps feel utterly earned. Hanks, himself no stranger to excellence, is also great, toning down the innate warmth that marks so many of his performances to play the slightly rougher and gruffer Bradlee, and there's a lot of pleasure to be had from watching him and Streep, two giants of the big screen, play off of each other. The Post isn't a challenging film in really any way, but it's a well crafted one on pretty much every level onscreen and off and it's very entertaining.
Posted by Norma Desmond at 8:00 AM