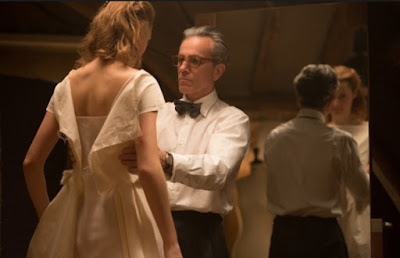 Generally speaking, I'm not a person who thinks that spoilers matter. What happens is much less interesting to me than how it happens, particularly since plot twists tend to be so telegraphed anyway. I knew that there was some sort of twist to Phantom Thread but I didn't know what it was (and not for lack of trying, as the giddiness with which some reviews talked around the twist piqued my interest, but Movie Spoiler didn't have a write up for the film yet and Wikipedia's entry for it was still just a couple of sentences that only gave the basic premise). I'm glad that I didn't because in a million years I don't think I would have guessed that the plot would take the turn that it does until it was already veering into that other lane, and that realization that it was taking that turn (and then the turns that flowed out of that one) was one of the great pleasures of watching the movie. I think that Phantom Thread, a meticulously put together movie in every respect, is a film that can be enjoyed even if you go into it knowing where it's headed, but it's a lot more fun if you go into it cold. So if you're planning to see it, stop reading here, because spoilers lie ahead.

Set in the 1950s in London, Phantom Thread begins as a story about a long-established fashion designer, Reynolds Woodcock (Daniel Day-Lewis), who is the couturier of choice for aristocrats, foreign royals, and celebrities, and whose life revolves around his artistry. He works out of the opulent townhouse where he lives, the business managed by his sister, Cyril (Lesley Manville), whose job includes removing the muses/girlfriends who have fallen out of his favor after being moved into the house, usually because they start demanding to be treated like humans with needs and desires of their own rather than decorative ornaments who only exist when Reynolds deigns to notice them. His most recent muse having reached her expiration date, Cyril suggests that Reynolds retreat to his country house while she takes care of the messy business of informing the woman that her time is up and moving her out of the house. While there he meets Alma (Vicky Krieps), a waitress at a local restaurant, and quickly becomes enamored. Soon she's in London, living with Reynolds in his house, modeling his clothes and, later, assisting in the workshop.

Up until this point, Phantom Thread is a chilly romance about an exacting man who uses women - not for sex, necessarily, though the film does establish that the relationship between Reynolds and Alma does have a sexual component; it's more like he's mining them for artistic inspiration - gives them virtually nothing in return for their devotion and then discards them, a woman who decides that she isn't going to be shunted aside so easily, and a third woman whose presence is a barrier to the development of emotional intimacy between the couple because she has been the man's lifelong confidante. That first act is enigmatic, even as the phantom thread of the narrative peeks out from the fabric early on: the late mother of Reynolds and Cyril. Long dead, she's the person who taught Reynolds his craft and he is not merely haunted by her memory, but obsessed with it. His first date with Alma includes a discussion in which he admonishes her for not carrying a photo of her mother on her person at all times and reveals that he has a lock of his own mother's hair sown into the lining of his jacket, so that she'll always be next to his heart (this is the first red flag of the evening; the second is when Cyril shows up and starts negging Alma on Reynolds' behalf). Despite being dead, the mother remains the dominant figure in Reynolds' life and no woman, except Cyril by virtue of the fact that she shares his connection to her, can measure up.

This is where things start to get weird. As the relationship between Reynolds and Alma begins to go the way of all of his relationships, his fascination with her turning to resentment as her habits and her very presence begin to get on his nerves, she decides to take drastic action in order to preserve it. What she does results in him becoming deathly ill and her nursing him back to health. The event seems to solidify their relationship, at first, and inspire Reynolds to commit in a way that he never has before, but it also has another effect: while ill, he has a hallucination of his mother, bringing him as close to her as he has been since she died. So when the "honeymoon" period after Reynolds' near death experience comes to an end, bringing him and Alma right back to where they were before, Alma decides to repeat her previous action. That's not such a surprise, but Reynolds' reaction when he realizes what's going on (which makes for one of the best scenes of the year) is very surprising - until you think about it. He longs to return to the state Alma puts him in because that state is capable of figuratively reuniting him with his beloved mother, but also because it renders him vulnerable in a way that requires him to be taken care of, not unlike how a child would have to be cared for by its mother. When he's in that state, for all intents and purposes, Alma becomes his mother and so he becomes tightly bound to her even though she's hurting him.

Although it has a lot of superficial pleasures - the sublime costumes and production design, Jonny Greenwood's beautiful score (I have no doubt that Alexandre Desplat's work on The Shape of Water is going to take the Oscar, but for my money Phantom Thread's music is the year's best) - Phantom Thread is a deep (and deeply creepy) psychological drama that begins like your average story of a powerful grown man behaving like an entitled baby and gradually becomes a fascinating portrait of a relationship in which pleasure is derived from pain. Phantom Thread was not the film I was expecting it to be, but it's one that kept me enthralled while I was watching it and which kept me thinking long after it was over. The trio of performances at the story's center are note perfect and so nuanced and layered that the line between drama and comedy becomes blurred in many scenes, allowing you to picture a very different, zanier version of a film featuring these three characters had Anderson decided to take them in that direction. In that respect, it's like a puzzle that can be assembled in multiple ways, coming together to deliver different takes on the same picture depending on how you fit the pieces together. Bizarre, gorgeous, and spellbinding, Phantom Thread is easily one of the best movies of 2017.
Posted by Norma Desmond at 8:00 AM