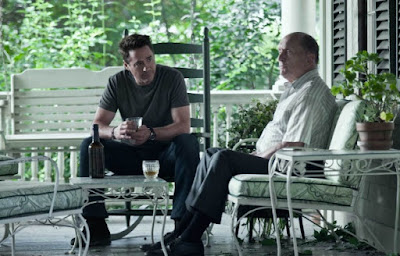 Back in the days before movies lived and died by their opening weekends, films like The Judge were Hollywood's bread and butter. A mid-budget drama where the stakes are emotional more than anything, as opposed to the now commonplace massive budget behemoths where the stakes are no less than the survival of the world itself, and where a big star gets to flex his muscle as an actor, The Judge is the kind of movie that used to be a no-brainer. Times change, of course, and now projects that used to seem risk free on paper struggle to recoup even their modest budgets (though The Judge might have helped itself by cutting 30 minutes from its running time and making the first casualty its weird and wholly unnecessary incest plot). The market is no longer particularly favorable to movies like this, but I can understand why they tried and why this would have seemed like a good idea when the script hit Hollywood. Old habits die hard, after all.

Robert Downey Jr., making what has been one of only a handful of appearances in non-franchise films since 2008's Iron Man, stars as Hank Palmer, a lawyer whom the film would have you believe is ruthless merely because he does his job by putting up a rigorous defense on behalf of his clients, and whose obsession with winning is the result of a deep-seated belief that if he does enough of it his father will finally love him. He has been estranged from his father, a small town Judge known to all, including his sons, as "Judge" (Robert Duvall), for his entire adult life. That doesn't change when he's drawn back home for the first time in decades to attend his mother's funeral, where things between him and the Judge remain strained and, at best, cordial until devolving into screaming and denunciation as neither man can resist the allure of picking at the scab on their relationship.

Though he tries to run back to his life in Chicago without looking back, Hank is stopped at the airport by his brother, Glen (Vincent D'Onofrio), who tells him that their father has just been arrested with respect to a fatal hit and run. The victim is someone with whom the Judge has a history and when the investigation concludes, the Judge is charged with murder and Hank steps in to lead the defense. As he battles for, and against, his father - officially Hank's opponent in Dwight Dickham, the prosecutor played by Billy Bob Thornton, but unofficially it's the Judge himself, who keeps crucial information from Hank and would rather risk taking the fall for something that even he isn't sure that he did than see his legacy tarnished by the information that he actually knows to be true - Hank also begins to settle back into life in his hometown, hanging out with Glen and their other brother Dale (Jeremy Strong), reconnecting with his ex-girlfriend, Sam (Vera Farmiga), and getting a chance to make out with a comely barmaid (Leighton Meester) who turns out to be Sam's daughter, his discovery of which leads him to believe that she could also be his daughter, causing him no end of anxiety (but don't worry, it turns out she's just his niece, so it's only kind of totally gross).

As courtroom dramas go, The Judge is... not great. Many courtroom dramas are built around a preposterous understanding of how trials happen and courtrooms function, depicting them as stages of entertainment rather than places with actual rules of conduct, but The Judge takes that to the next level. There are certain things you can suspend disbelief for by saying "It has to happen like this because it's a movie," like, say, the trial happening right away instead of a year or two after the fact, or the Judge being tried in his own courtroom; but by the time you get to the climax where the Judge has taken the stand and Hank uses it as an opportunity to have a family therapy session in open court, you have to wonder why no one is objecting to what they're watching and shutting it down. I mean, most people don't even want to have to deal with their own family's interpersonal shit, so when Hank and the Judge start delving into the reasons for their estrangement, with the former asking in not so many words why the latter doesn't show him any love, and the latter explaining in so many words that every time he thinks of him he's reminded of the time he gave a "boys will be boys" slap on the wrist to a teenager who tried to shoot his girlfriend only for that kid to take his second chance and use it to finish the job by drowning her; I'm not sure why people aren't slowly backing out of the courtroom to allow them to work this out in private.

As a family drama, The Judge fares slightly better (I mean, aside from the Leighton Meester subplot, which is played for laughs and is just icky). In quiet, one-on-one scenes with D'Onofrio, Farmiga, and, in particular, Duvall, Downey demonstrates that despite a decade playing larger than life characters like Iron Man and Sherlock Holmes, he's still more than capable of playing a character struggling with more down to earth problems and digging deep into a character with a lot of emotional baggage. Though, it must be said, for how long the film is, it doesn't use that time to flesh out any relationship other than the one between Hank and the Judge (for example, Glen has a wife and two sons and I'm pretty sure we never learn any of their names, Hank's history with Sam is more teased than actually explored, and then of course there's the revelation about her daughter which feels random as hell). All told, The Judge is moderately entertaining in a very glossy, Hollywood way, though it would be better served by tightening up its story and cutting down its running time as by the time you reach the end, the actual narrative has started to peter out.
Posted by Norma Desmond at 11:22 AM