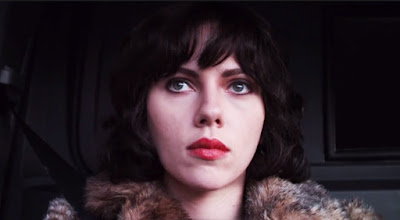 Jonathan Glazer’s Under the Skin is the sort of film that unsettles on such a deep and durable level that you might never be able to fully shake it. Cold but graceful, inaccessible but hypnotic, it’s the kind of film in which none of the characters are named and nothing is overtly explained, but it’s so full of striking, brutal images that it leaves one so entranced that the “whys” that the narrative might inspire become unimportant. You simply drift along its jagged, treacherous current until you get to its destination. Many shocking things occur during the course of its 108 minutes, but perhaps the most shocking thing about it is that a film that seems so preoccupied with the experience of being a woman in a world so hostile to femininity could be written and directed by men.

Scarlett Johansson stars as an alien that has taken the guise of a human woman for the purpose of entrapping and then harvesting human beings. Working under the supervision of an alien disguised as a man (Jeremy McWilliams), she roams through Scotland looking for men to lure back to the dilapidated house where she’s set up shop. Seduced by the promise of sex with a woman who looks like Scarlett Johansson (a prospect so alluring that many of the pick up scenes were filmed with non-actors who didn’t know until after the fact that they were participating in a movie), the men follow her into the house and don’t even seem to notice that the further they follow her, the deeper they descend into a strange black liquid where they will become frozen until their bodies are ready for harvest. Once the victim has been immersed, she heads back out to drive around in her van, observing humanity with the cold detachment of a scientist performing an experiment. Humans are a curiosity to her and human behavior, as seen through her eyes, seems strange and sometimes incomprehensible – but, interestingly, she doesn’t seem to view it as threatening during the film’s first half, where traditional gender narratives are upended as she acts as subject and views the men around her as objects.

In that first half she is pure predator, her human body merely a camouflage that allows her to stalk through the world while she hunts. She has learned enough about human interaction to carry on conversations (albeit very weird conversations), but she does not engage the world as a human, let alone as a woman. When she goes out into the world, she doesn’t behave in a way traditionally associated with women and the men that she lures are not drawn to her because of how she’s actually behaving (which would be incredibly off-putting if they were actually paying attention to it), but by how they’ve been conditioned to understand female behavior and social cues. She seems lost so they think that she’s the vulnerable one and that they have nothing to fear, and they don’t seem to lose that understanding of the dynamic even as they’re sinking into what will bring about their slow deaths.

The character doesn’t behave like “a woman” because, of course, she isn’t really one, but that changes in the film’s second half. Here she begins to develop something resembling empathy and it triggers a growing awareness in her not just that she’s inhabiting a human body, but that she’s inhabiting the body of a human woman specifically, and what that body signifies to the world around her. She abandons her post and goes from hunter to hunted, sought by her supervisor and preyed upon by men who see her as defenceless, and suddenly finds herself occupying a position where instead of providing her with power, her body turns her into a target. She has always been alien, but this is when she starts to feel alienated from everyone around her. Under the Skin is a story about what it means to be human, how we begin as blank slates and gradually become “people” by living in the world and connecting with other people, but it’s also very much about gender and how men and women experience the world through different lenses and within the boundaries of a different set of “rules.”

Under the Skin is a film that fascinates and a major reason for that, aside from Glazer’s absolute confidence in what he’s doing as a director (and co-writer along with Walter Campbell), is Johansson’s performance. Like Kristen Stewart, Johansson is an actor who can often come across as “wooden” but, like Stewart, in the right role that quality can be turned into an advantage. Here Johansson displays an effective blankness, underplaying the role to maximum effect to show just how alien this alien is. Her eyes, in many shots, seem empty and she carries herself with a disconcerting level of calm and stillness. In one scene, in particular, her van is attacked by a group of men and she merely looks at them, not comprehending their purpose or their actions, or how they might relate to her. What they are doing is frightening, and that sense of threat is heightened by the way that Glazer films the scene, but what’s even more unnerving is the way that she doesn’t really react to it. All of this may make it sound like Johansson does “nothing” in the film, but consider how difficult it would be for an actor to convey a state of absolute detachment, to have no human feeling or experience in which to anchor their character. It’s a very skilled performance, as haunting as the film itself.
Posted by Norma Desmond at 8:00 AM