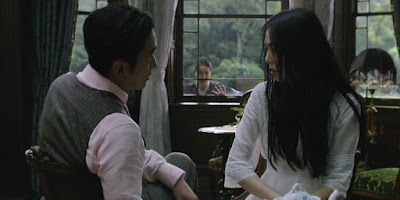 Lurid. Nasty. Darkly funny. Park Chan-wook's The Handmaiden is a lot of things, but it's certainly never boring. A somewhat faithful, but also somewhat loose, adaptation of Sarah Waters' novel Fingersmith, The Handmaiden is an elaborate contraption of a movie that transports the original narrative from Victorian England to the 1930s in Japanese occupied Korea and stuns with its sumptuous costuming and production design, gorgeous (and playful) cinematography, its merciless violence, frank eroticism, and its ability to deftly navigate the turns and multiple turnabouts of its story. The Handmaiden is a savage beauty of a film and it's probably just as well that South Korea didn't make it their submission for the Best Foreign Language Film race at the Oscars since the Academy tends towards the conservative and films this twisted and explicit only rarely get nominated (and pretty much never win).

The Handmaiden is told in three distinct parts. The first unfolds from the perspective of Sook-hee (Kim Tae-ri), the handmaiden herself, a pickpocket who is chosen by Count Fujiwara (Ha Jung-woo), a conman passing himself off as a Japanese aristocrat, to be planted in the household of a wealthy and isolated heiress so that she can assist him in seducing her and obtaining her fortune. The heiress is Lady Hideko (Kim Min-hee), who lives under the control of her uncle, Kouzuki (Cho Jin-woong), a brutal man who demands complete obedience and is obsessed with his collection of rare books. Although Kouzuki enjoys of a lavish lifestyle - including the massive estate which features buildings designed in English and Japanese styles, as he is an admirer of both - he's depleted his capital to the point where he needs to sell the books in his collection, but has come up with a way to have his cake and eat it, too, by engaging Fujiwara to forge the books for him so that he can get the money from selling the forgeries and keep the originals for himself. He's also planning to marry Lady Hideko, who is the daughter of his late wife's sister and whose fortune comes from her mother's family.

Placed in the home to put a bug in Lady Hideko's ear that will turn her towards Fujiwara, who intends to marry her and then commit her to a madhouse so that he can have her fortune to himself (less what he's agreed to pay to Sook-hee), Sook-hee instead finds herself falling in love with her mistress and becoming a reluctant participant in Fujiwara's plan. What occurs in this first part is viewed from a different perspective in the second, which is told from Lady Hideko's point of view and reveals her to be far less naive than Sook-hee assumes and her life under Kouzuki's thumb to be even more abusive than it seems. In the third part the film departs most significantly from Waters' novel, becoming something more akin to Park's "revenge movies" as the violence of the film rises to meet the graphic level of the sexual content.

The Handmaiden is not a film that can be said to be bashful when it comes to the sex in its story, relying on sexual tension for only a relatively brief period before giving way to scenes that are reminiscent of (and, in some respects, seem to be outright duplicating) those in Blue is the Warmest Color. While the sex sometimes verges on the fetishistic - though, given Kouzuki's preoccupations and the revelations of the film's second section, perhaps it's meant to be - it's also the place where Park has located much of the film's humor, largely as a result of one encounter being viewed twice, once from the perspective of Sook-hee and then from the perspective of Lady Hideko, to say nothing of a scene late in the film between Lady Hideko and Fujiwara which has a lot of fun with an attempt at a classic double cross scenario. Though Park takes the narrative seriously enough to successfully, even gracefully, steer the film through its split in perspectives, its doubling backs, and the unveiling of its mysteries, the film also feels like its having enough fun with its narrative that, despite some of the gruesome things that happen, it seems light in spirit. Vengeance might be taken in the film but, ultimately, this is a love story and a rather engaging one at that.

The split in perspective is the key to why The Handmaiden works (even its title represents that split, in a way, as the Korea title is Agassi, which refers to Lady Hideko rather than Sook-hee), functioning as it does to give the viewer the feeling of having the rug magnificently pulled out from under them, but also serving to reveal more about the two central characters. When told from Sook-hee's point of view, she herself is a master manipulator, Lady Hideko an innocent whose life of isolation has left her incapable of protecting herself. When told from Lady Hideko's point of view, Sook-hee's attempts at manipulation start to look a little clumsy, while her belief that Lady Hideko is an innocent makes it clear that she's not that adept at reading a room. The two performances are really great, with Kim Tae-ri expertly depicting a woman who believes that she's a lot smarter and smoother than she actually is, but who learns quickly how to become a true player in the game, and Kim Min-hee delivering the kind of dual, multi-layered performance that's comparable to what Naomi Watts does in Mulholland Drive. These are two of the best performances of the year, their intricacies making The Handmaiden more than just a film with a lot of twists and turns, but one that intrigues and enthralls.
Posted by Norma Desmond at 8:00 AM