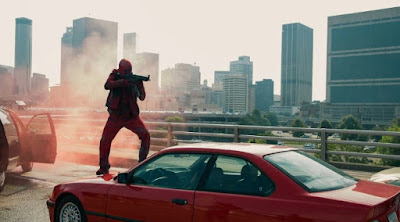 Since 1995, all heist movies have existed in the long shadow of Heat, Michael Mann's defining word on the genre. Every once in a while there will be a film like The Town, which struck a deep enough chord to stand somewhat apart, but that's the exception, rather than the rule. Most of the films that have followed Heat have to be content with paling in comparison and John Hillcoat's Triple 9 is no different. A heist movie centering on dirty cops and the Russian mob, Triple 9 features a lot of really good actors playing some pretty stock characters, making for a film that's fairly entertaining most of the time, but ultimately a forgettable entry in the filmographies of all involved. Rarely has such a great cast been assembled for a such a deeply okay movie.

A triple 9 is the police code for an officer down and it's at the heart of the plot hatched by the gang of thieves in the film, which consists of Michael (Chiwetel Ejiofor), Marcus (Anthony Mackie), Franco (Clifton Collins, Jr.), Russell (Norman Reedus), and Gabe (Aaron Paul). Michael and Russell are former mercenaries, while Marcus and Franco are cops, and Gabe is an ex-cop, and they've come together to rob an Atlanta bank and retrieve the contents of a safety deposit box, though Gabe gets greedy and steals some money as well which almost results in their getaway being foiled. The safety deposit box contains information needed by Irina (Kate Winslet), a Russian mob wife and the sister of Elena (Gal Gadot), the mother of Michael's young son. Irina's husband is currently in custody and with the information in the box, as well as some further data currently tucked away in a government facility, she'll be able to get him out, but the gang balks when the demand for a second heist is sprung on them. However, with Irina controlling Michael's access to his son, he feels that he has no choice but to carry out the second job.

The detective heading up the investigation into the bank robbery is Jeffrey Allen (Woody Harrelson), whose nephew Chris (Casey Affleck) has just been transferred to a new department and has become Marcus' partner. The two get off to a bad start with each other, which results in Marcus suggesting that the gang use Chris to pull off their second heist by arranging for him to be killed and calling in a 999, drawing all the police to one area of the city while they're on the other end breaking into the government facility. Not everyone in the gang is comfortable with the idea of killing a cop and even Marcus begins to have second thoughts after spending more time on the job with Chris, but Michael is beholden to Irina because of his son and he pushes things forward even as he begins to lose members of the gang.

Triple 9 is a film that is at once too much and not quite enough. There's a lot of plot, but most of it is at least interesting. The bank robbery that opens the film is well-wrought, with the tension steadily building through the actual robbery even as the gang moves through the bank in a manner so assured that it almost seems casual, and then finally exploding during the getaway when a dye pack goes off in the van in the middle of traffic. Similarly, the double play that occurs at the climax, with Chris being lured into a trap while the remaining members of the gang get ready for the signal so that they can make their move, is a well crafted set piece that holds nothing back as all of the characters find themselves at their most desperate points.

But while the action sequences are really strong, few other elements of the film live up to it. Gabe is distinguished by the fact that his demons have driven him to drug addiction and he still possesses some shred of a conscience, but Michael, Marcus, and Franco are all basically the same guy - tough talking, quick to violence, ruthless when it comes to his own self-interest. Michael is ostensibly given some depth through his devotion to his son and relationships with Elena and Irina, but that doesn't really amount to much. Michael's relationship with Elena is vague; Irina states at one point that she can't kill Michael because Elena would never forgive her, but... all evidence present in the brief moments when Elena and Michael are together onscreen suggests that she views him with little more than mild interest, as if he's just a curiosity and not the father of her child. Any sense of the history between the characters is missing, which is problematic because it's one of the central conflicts of the narrative.

Triple 9 has lots of great actors in it, but I wouldn't describe it as a film full of great performances. Harrelson equips himself well, seeing the material for the pulpy spectacle that it should be, and Mackie, Ejiofor, and Paul all get some nice moments as their characters wrestle with internal conflicts, but by and large the performances are quiet and understated to the point of being entirely overpowered by the action going on around them. Even Winslet, whose mob wife character cries out for a colorful, scenery chewing performance in order to make her the formidable power player she's supposed to be, is so muted here that the character never truly registers as a force to be reckoned with. Triple 9 is a film that takes itself very seriously and everyone in it (with the exception of Harrelson) is very buttoned up - leaning into the story's inherently sensationalistic elements would have helped the film immeasurably in terms of being anything more than a cookie cutter crime thriller.
Posted by Norma Desmond at 8:00 AM