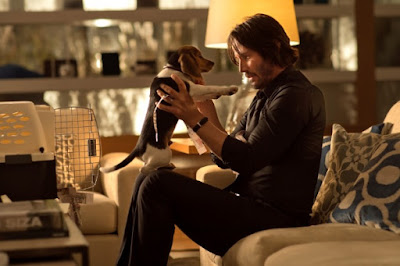 I'm not sure who is more cruel. The villains in John Wick who are so irredeemable that they can't be satisfied with simply beating up the title character, but have to kill his dog, too, or the filmmakers of John Wick for introducing that adorable puppy, making the viewer watch it frolic adorably with Keanu Reeves, and then snuff it out. Admittedly, it's a pretty effective way to get viewers on the side of a protagonist who is going to spend the next hour or so taking lives left and right, but damn that dog was so cute. Netflix's recommendations seem to lead me wrong more often than not, but I probably wouldn't have gotten around to John Wick if not for Netflix and, despite the dog death, I rather enjoyed it. It's a slick bit of business in which a great many people die and a lot of blood is shed in very stylish fashion and it's basically everything that an action movie ought to be, but very few actually are.

The set up is simple: John (Reeves) has just lost his wife to cancer and received, as a final gift from her, a puppy whose purpose is to help him cope with her death. After he encounters a trio of Russian douchebags at a gas station, and refuses the demand of the ringleader, Iosef (Alfie Allen), that he sell him his Mustang, they break into his house, beat him to a pulp, kill the dog, and steal the car. When they then take the car to a chop shop, word begins to get around about what they did and although Iosef's crime boss father, Viggo (Michael Nyqvist), is at first incensed when he learns that the chop shop owner refused to help Iosef, he quickly comes to understand the situation: Iosef made an enemy of the wrong man. Everyone, it seems (except Iosef and his pals), knows the name John Wick, an assassin notorious for his skill and efficiency who retired when he met the woman who would become his wife. Now John is back in the thick of things, determined to get revenge on Iosef even if it means having to mow down every criminal in New York to get to him.

The action in John Wick is largely what you see in every "one man army" action movie. There are car chases. There are gun fights. There are scenes where a dozen men descend on one and the one emerges victorious thanks to his cat-like reflexes and prophetic ability to guess how and when someone is going to come at him. The only surprising thing about the action is how many bullets Wick uses, as often he shoots a guy in the head and then... shoots him in the head again. I'm no expert, but that seems like a waste of time and a bullet. Where John Wick excels is in its world building, giving the audience enough to be intrigued by the setting (though not so intrigued that a sequel seems necessary, as this story is wonderfully self-contained) without going out of its way to explain every facet of it. Without too much in the way of exposition, the film expresses that Wick once belonged to a criminal underworld that operates just to the side of regular society, with the knowledge of the police who take a hands off approach to it, operating with its own separate economy in which the players are paid not in cash but in gold coins and enjoying spaces in which only members are admitted entry. One of those spaces is the Continental Hotel, which is owned by Winston (Ian McShane) and acts as a neutral space where members of the underworld can stay and in which conducting of underworld business is forbidden.

It's the film's facility with building this little world around John Wick in a way that fortifies the narrative instead of slowing it down that makes John Wick just a little bit more than your typical action revenge tale. I mean, John Wick is a stock character, a guy who only seems unassuming until he's pushed and then reveals the deep reserves of rage at his core, a guy who has literally buried his past in the floor of his basement and digs it back up with a sledgehammer when he gets the call, a guy who thought he was out until they dragged him back in. Iosef is your basic one-note bad guy, a guy who thinks he's a badass by virtue of his father holding a position of power but who, separated from that power, proves to be nothing more than a sniveling brat. Viggo is every man with power who fought his way up the ranks and whose feelings about his heir alternate between annoyance, because he's spoiled and useless, and protectiveness, because he is his son, though the character gets a bit of a twist here in terms of how far he's willing to go to protect his own. The characters themselves are not all that interesting, and certainly aren't revelatory, but the context in which they're placed by Derek Kolstad's screenplay is so full-bodied that the characters need do little more than simply be there.

Visually, the film is a polished bit of business that, at a production cost of just $20 million, puts many of its $100 million-plus budgeted brethren to shame. Directors Chad Stahelski and David Leitch make the most of everything they have at their disposal, including a great supporting cast of character actors (including McShane, Willem Dafoe, John Leguizamo, and Dean Winters) and a solid leading performance from Reeves in a role that, while it doesn't demand much more than looking cool while doing incredibly violent things, plays to his strengths as an actor. John Wick isn't a timeless masterpiece by any stretch of the imagination, but it's not trying to be either. It's a great B-movie with modest ambitions, and in that sense it's a modern classic of its type.
Posted by Norma Desmond at 6:29 PM