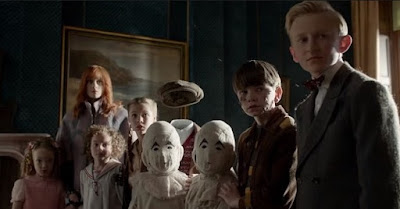 The pairing of Tim Burton and Miss Peregrine's Home for Peculiar Children - a story about kids with special abilities who are kept hidden away from society - is so obvious it almost feels like parody to actually see it. All that's missing are Helena Bonham Carter and Johnny Depp, replaced here by Eva Green and Samuel L. Jackson. While the film, adapted from Ransom Riggs' novel of the same name, is pretty much exactly what you would expect it to be - full of whimsical misfits, grand spectacles of costume and production design, and, requisite for all big studio pictures, an ending that invites sequels - it's also the most that I've enjoyed a Burton film since probably Corpse Bride. It may not be a masterpiece, but it's a pretty decent entertainment.

As the title suggests, the story is populated by children who possess peculiarities, in this case ranging from great strength, to the ability to manipulate bodies as if they are puppets, to the ability to control air, or fire, or plant life, among other things. The world in which these peculiar children exist is also populated by Ymbrynes, birds that can take the form of women (or women who can take the form of birds; I'm not sure), whose role is to protect the children; Wights and Hollows, former peculiars who have become monsters as a result of their attempt to gain immortality; and time loops which are created by the Ymbrynes and allow them to hide and protect their charges. When a loop fails to be reset, it closes forever and the moment in time that it preserves is lost, and those caught out of the loop when it closes will rapidly age as time catches up with them.

This world of peculiarity is discovered by Jake (Asa Butterfield), a Florida teenager whose grandfather (Terence Stamp) dies in mysterious circumstances, but not before giving Jake a clue about what has happened to him which leads Jake to Wales, where his grandfather spent part of his childhood in a home for children. On arriving, Jake learns that the home was destroyed during a bombing in 1943, but also encounters some of the children that he recognizes from his grandfather's photos and stories. The children lead Jake into a loop, created the night of the bombing so that the inhabitants of the children's home are perpetually living in that final day, and where he meets Miss Peregrine (Eva Green), who begins to prepare him to learn the truth about who he is and how he fits into the world of peculiarity. With the Wights, under the leadership of Mr. Barron (Samuel L. Jackson), closing in and the peculiars in their sights, time is of the essence for Jake to realize his true purpose.

A classic "hero" narrative where the protagonist realizes that he's not the ordinary person he always thought he was, but the key to saving everyone and everything, Miss Peregrine's Home for Peculiar Children is flawed but largely entertaining. Although its first two thirds are methodical in building things up, the "rules" of the film nevertheless are a bit confusing in terms of the story's semi-resolution (for example, I'm not sure why Jake has to travel through multiple loops in order to get where he ends up rather than just going through the one loop he needs, and I'd be curious to see how he explains to his parents how he ended up in Blackpool at the end and whether this means there are now two of him), and the ending ends up feeling a bit rushed in comparison (it's not as bad as Fantastic Four's "uh oh, we only have 20 minutes left to stage a battle and end the movie" finale, but it's not too far off), but even that has its delights, chief among them a fight between the Hollows and some skeletons that calls to mind the classic scene from 1963's Jason and the Argonauts.

The film also has to its credit a sense of campy fun, largely courtesy of the performances from Jackson and Green. Despite playing the "big bad," Jackson approaches his character in a playful and casual way, less sinister and more funny, and Green is endearingly eccentric as Miss Peregrine, giving the character certain bird-like mannerisms when it comes to the way that she holds and tilts her head and regards the characters she's interacting with. The downside of the two performances is that neither ultimately spends all that much time onscreen and are certainly missed during the portions of the film that try to mix a romantic subplot between Jake and Emma (Ella Purnell), one of the peculiars who back in 1943 was enamored with Jake's grandfather (which, even in a film where a kid has bees in his stomach and can use his mouth to shoot bees at people, is weird), in with the plot to stop Barron and his team. Miss Peregrine's Home for Peculiar Children is a bit of a mixed bag in that respect, and certainly suffers from an overly busy narrative that doesn't pay off here as it's designed to pay off in subsequent films, but overall it's a surprisingly enjoyable film.
Posted by Norma Desmond at 5:57 PM