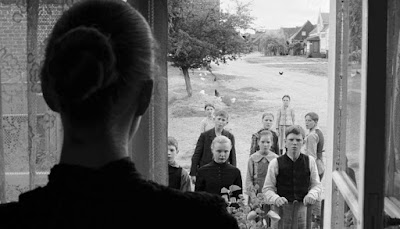 Michael Haneke loves to unsettle. If the audience feels comfortable, then the film isn’t working to maximum effect. His are films that simmer with tension, that ominous feeling of a shoe about to drop, and often deny the sense of catharsis that can come from that drop, raising questions and then withholding the answer, resolving the story without dissipating the tension so that for the characters that feeling of menace will just be part of their lives going forward. Certainly that is the case with The White Ribbon, a film which is not directly about the rise of National Socialism in Germany, but which is about the societal dynamics that laid the foundation for Fascism. It’s a haunting film both for its beautiful craftsmanship and for its steadfast refusal to “solve” itself, and it’s one of the most fascinating films of the last ten years.

The story of The White Ribbon, which takes places in the year immediately leading up to World War I, is related many years after the fact by a now elderly tailor who, at the time, was a village schoolteacher (Christian Friedel). With the country still existing in a semi-feudal state, the village is governed primarily by the Baron (Ulrich Tukur), on whom most families depend for their livelihood, and secondarily by the Pastor (Burghart Klaussner), who sets the tone in the village and rules through repression, particularly in his own household. Though none of the adults understands it yet, they are living in the dying days of an old order that is about to be cast aside and replaced with something new, something harder, something more clannish, something even more uncompromising – something that the children are beginning to explore and act out.

Strange things begin to happen, events that confuse and terrify the village. A wire is strung up between two trees to trip the village’s doctor (Rainer Bock) off his horse. The son of the Baron is beaten, and later another child is almost killed. A barn is set on fire. The pastor’s beloved pet bird is killed with a pair of scissors. The midwife suddenly disappears without explanation. The teacher becomes suspicious of the children, who seem to have developed a pack mentality and who seem to know things that they refuse to share with the adults, the ringleaders having intimidated the weaker among them into silence and complicity. The teacher begins to ask questions but it comes to naught as the events unfolding on the world stage force a change in focus towards the inevitability of war.

The word “Nazi” is never uttered in the film, but The White Ribbon is very much concerned with the tangle of societal ills that helped pave the way for the rise of National Socialism. The story presents three social generations: the older adults who hold the institutional power as both important figures within the village (the Baron, the Pastor, the doctor) or merely as the heads of their own households, the younger adults (the teacher), and the children. The older generation rigidly controls every facet of life in the village, holding tight to the traditions and hierarchies of old in order to maintain order and power. This creates a feeling of unrest that seems to grow from scene to scene, but instead of rebelling against oppression, the youngest generation seems to be learning from it and manipulating it to meet their own needs. Among the children a new hierarchy is being formed, a society that seems to function entirely apart from the adults in the village, and one which secures loyalty through acts of brutality and the creation of a culture of fear. The more the older generation tries to control them (including controlling their burgeoning sexuality either by repressing it or exploiting it for their own means), the more the children crave the expression of power amongst themselves.

In between these two generations is another, the one that should gain power as the older generation falls away and which should be able to temper the extremes of the younger generation. This is the generation of the teacher, who tries to intervene in what he can sense is happening among the children but is ultimately prevented from doing so by the Pastor, and of the son of a peasant woman who has died in an accident, prompting him to an act of vengeance that he views as striking a blow against the unfairness of a class system that treats people like him less as human beings and more as chattel, cogs in a machine that help keep the system afloat and the aristocracy in comfort. This generation will be significantly depleted by the war, creating a vacuum which the generation of children will fill, inheriting the power of society while coming of age in a rapidly changing world, one where political, social, and economic turmoil will make totalitarianism inevitable in several corners. The ending of the film lacks concrete resolution, but that’s because on the grander scale, things are only just beginning.

The screenplay, written by Haneke, tells a story that is deliberately obscure. The narrator does not have all the answers because the children closed ranks against the adults, and what he has to tell is what he has pieced together from the things that he witnessed with his own eyes and the things he heard from others and all of it, likely, has been colored by the passage of time. This isn’t reportage, but memories being recounted with the benefit of hindsight by someone who is, perhaps, living through the results of Nazism’s rise and seizure of power. Though the film initially presents as a mystery – who is behind all of the strange, violent things happening in the village? – it is one that will not be solved and which is ultimately beside the point. It doesn’t matter who is doing these things; what matters is that circumstances have become such that some person or persons feel emboldened enough to do these things. For some viewers this may result in dissatisfaction, but it’s that lack of resolution, that feeling that “resolution” isn’t even really possible, that helps make The White Ribbon so fascinating. Beautifully photographed by Christian Berger (who received an Oscar nomination for his work here) and well-wrought by Haneke, The White Ribbon is a film that stands alongside Cache and Amour as Haneke’s masterpieces.
Posted by Norma Desmond at 12:27 PM