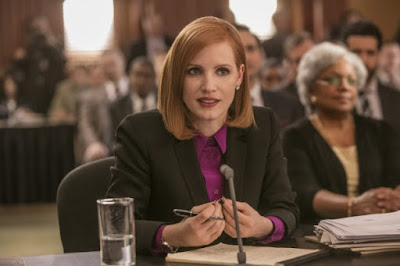 Like a number of recent entertainments, how you feel about Miss Sloane may be dependent on your feelings about the current political climate. This isn't even necessarily because of the cause at the heart of the film's narrative (gun control), but because of the film's ending and whether you're able to view it as the triumph the film clearly intends it to be. Personally, I can find little joy in a situation where victory belongs to the person most willing to burn it all to the ground (their own life included), though on the whole I rather enjoyed Miss Sloane. A rarity among films in that it not only centers on an unapologetically unlikeable female protagonist, but doesn't make any effort to soften her before the end, fleshing her out over the course of the story but letting her retain her sharp edges, Miss Sloane is anchored by a wonderful performance from Jessica Chastain that allows it to (mostly) transcend the overplotting designed to make her as Machiavellian as possible.

Elizabeth Sloane (Chastain) is a D.C. lobbyist highly in demand as a result of her ability to get results for her high profile, high paying clients. She has no personal life to speak of, no family she's maintained connection with, a flexible moral compass, and an indefatigable desire to win, but when she's approached by an NRA rep about helping to "re-brand" guns so that they appeal to women, she laughs in his face and earns the ire of her boss, George Dupont (Sam Waterson), who tells her to make amends to secure the NRA as a client or risk losing her job. Instead Elizabeth walks out of the company, accepting the offer of Rudolfo Schmidt (Mark Strong), who runs a smaller rival firm and is lobbying on behalf of a gun control bill, and takes half of her team along with her. The notable defector is Jane (Alison Pill), who stays behind to seize some of the power that's up for grabs in Elizabeth's absence and prepares to go to war with her now former mentor.

Miss Sloane is an openly political film, but it wouldn't really be accurate to call it an "issue movie." Elizabeth is in favor of gun control, and by virtue of the fact that the characters shown fighting for the other side of the issue are fairly one-dimensionally villainous, the film certainly seems to view her side as the more righteous one, but the film also makes some effort to view the debate in terms that are more than just black and white. Miss Sloane takes pains to allow Elizabeth to explain that she isn't arguing that there should be no guns, but merely that it should be more difficult for dangerous people to get guns, and even contains a scene where the fabled "good guy with a gun" stops a bad guy with a gun. Yet, for all that, the topic at hand feels sort of incidental. Elizabeth could be lobbying for just about anything else without having to change much about the story because the film isn't about her argument, but about her ruthlessness and her willingness to do anything to win, from exploiting people close to her to breaking the law to blowing up her own life in order to take down her enemies.

With a screenplay written by Jonathan Perera, Miss Sloane is a swift moving thrillerish drama that barely pauses for breath as its characters go about the business of playing the political game, which includes strategizing ways to sway members of Congress over to their side, controlling the media narrative in order to try to keep those members of Congress from flipping to the other side, and trying to stay one step ahead of their rival lobbyists. If the film has a weakness, it's that it gets a little too caught up in trying to portray Elizabeth as a schemer of such epic proportions that she's basically omniscient, so perfectly able to predict the behavior of those around her that she can herd them to where she wants them while letting them think that they are putting her on the hot seat. The resolution of the film is ludicrous; while there's truth to Elizabeth's point that politicians who are so driven by their own self-interest that they become puppets of lobbyists are unworthy of the power they possess, to get to the point where she's able to make that impassioned speech on the most public platform she can get, she first has to unfold her very complicated plan and any plan that hinges on the possibility of you going to prison is, by definition, a bad plan.

While the story goes a bit off the rails at the end, Chastain remains compelling throughout. Elizabeth is not an easy character - she's short-tempered, she's always looking for an angle, she's devoid of all warmth - and while Chastain is able to give small peeks at what lies beneath that hard exterior (most often in scenes with Gugu Mbatha-Raw, who plays a member of her team with whom she seems to develop a genuine connection until her darker impulses take control), Miss Sloane doesn't view her as a problem that has to be solved. While the screenplay contains some dialogue which suggests, in a non-specific way, how it is that Elizabeth became the person she is, it doesn't try to "explain" her, to reduce her to the notion that she's a ball-buster because [insert trauma here]. Just as she isn't in favor of gun control because she's been a victim of gun violence, but merely because gun control is what makes sense to her, she isn't who she is because of some terrible thing that happened in her past. She just is who she is. While male anti-heroes have been a dime a dozen for decades in film and TV, a female anti-hero (particularly one who is allowed to stay that way) is still rare enough to feel like a breath of fresh air, and that sense of novelty combined with Chastain's skill as an actor are more than enough to make Miss Sloane worth a watch.
Posted by Norma Desmond at 8:00 AM