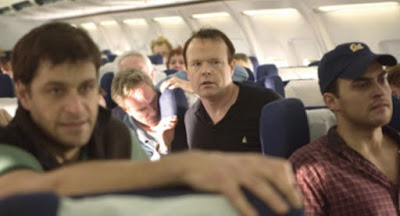 I genuinely can't fathom how anyone managed to make it through United 93 in a theater in 2006. I could barely do it at home in 2016, a decade and a half removed from the events depicted. Films dramatize real-life tragedies all the time, sometimes at a far historical remove, sometimes not, and they can be moving without necessarily being devastating. Whether it's because of the intimate way that it's filmed, the sense of dread and helplessness that permeates every frame, or the way that it subverts (as it must) every convention cinema has trained us to anticipate, United 93 is a movie that tears you up as you watch it. It's a great film, without question, but it's great in a way that's almost unbearable, putting it in the class of films that are so effective that you're grateful to have seen it, but hope to never see it again.


The Story
United 93 relates the events of September 11th, specifically the story of United Airlines Flight 93, one of the four planes hijacked and the only one not to make it to its target as a result of the intervention of the passengers onboard. United 93 tells the story from the perspective of those on the plane, as well as those on the ground.


The View From 2006
The Good: "United 93 is a tremendous experience of fear, bewilderment, and resolution, and, when you replay the movie in your head afterward, you are likely to think that Greengrass made all the right choices." - David Denby, The New Yorker

The Bad: "United 93, as grueling as it was to sit through, left me feeling curiously unmoved and even slightly resentful. At some point, Greengrass' exquisite delicacy and tact toward all sides—the surviving families, the baffled air-traffic controllers, even the hijackers themselves—began to smack of political pussyfooting." - Dana Stevens, Slate


The View From 2016
Though it's a film that immortalizes a specific point in time, one of the reasons that United 93 is so intensely effective is that it exists very much in the moment, unfolding its story as if without possessing the benefit of hindsight and instead seeming to experience it right along with the characters. It starts out fairly slowly, introducing the four terrorists and observing them at the airport as they try to blend in with the other passengers awaiting the flight. They're a fidgety bunch, not because they have doubts, but merely because they're so full of anticipation, and the contrast between their restless energy and the composure of the other passengers and the flight crew, who think this is just going to be another normal day, informs the atmosphere of the first section of the film. Meanwhile, as the flight is getting underway, Ben Sliney (playing himself) is starting his first (and, I'm guessing, what will turn out to be his most challenging) day as the new FAA National Operations Manager, his first meeting interrupted with the news that American Airlines Flight 11 has been hijacked and crashed into the North Tower of the World Trade Center.

United 93 functions largely in a state of bewilderment, seeing everything through the eyes of people who can't comprehend what they're looking at, from air traffic controllers watching their screens and trying to figure out why a plane just disappeared from it, or looking out the window and seeing the first plumes of smoke billowing out of the tower, to people at the FAA and the military learning that one, two, three, and then four planes have been hijacked and that they're being used as missiles against specific targets. On the ground, no one really knows what's going on and no one is really certain what to do in the face of something so unprecedented, and one of the most shocking moments in the film comes when Sliney makes the decision to ground every plane in US airspace and there's actually a moment when someone tries to debate with him over whether that's the thing to do by citing the financial losses that would result.

The shock and confusion of those on the ground is captured so well that it takes you right back to that morning, but it's the experience of those on the plane that just guts you. Unaware of the chaos that's already taking place on the ground, the passengers still think it's just another normal day until the terrorists decide to leap into action, taking a flight attendant hostage and forcing their way into the cockpit, where they kill the pilot and co-pilot, and keeping the passengers at bay with the threat of a bomb. Even then, the passengers still have no real idea of the enormity of what's happening, assuming that the hijackers will make their demands and the plane will land and they'll be hostages until the demands are met. It's only when they get on phones and make contact with people on the ground that they learn what's going on and that the terrorists don't "want" anything except destruction, and some of them come up with a plan to overpower the terrorists and take back control of the plane.

The scenes on the plane account for some of the most intense cinema I've ever seen. One could argue that it wouldn't matter who the filmmaker was, because the story would have an impact no matter what, but to do so you would have to ignore the choices that director Paul Greengrass makes that turns this into such an effective and affecting piece of work. No doubt the film takes some liberties, as all films do, but the general restraint that Greengrass shows leaves little reason not to believe that he's hewed as close as possible to the facts as they are known. There's no grandstanding or big speeches, no attempt to turn the passengers into character archetypes or to shoehorn their backstories into this story. By and large, the characters aren't even introduced by name within the film, and overall United 93 has spare and basic aesthetic that suggests a lack of embellishment. Greengrass understands that the story is powerful enough as it is and needs no artificial enhancement, and that lack of bells and whistles is a large part of what makes the film feel so timeless and remain so commanding.
Posted by Norma Desmond at 8:00 AM