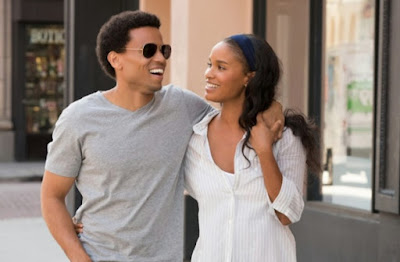 It's sort of hard to reconcile how a movie that is only cynical and hard-edged in the most sanitized and palatable way (not to mention only sporadically clever) has its roots in a play by David Mamet. About Last Night is David Mamet with all the David Mamet excised, which is sort of surprising given that the film was adapted by Leslye Headland, writer/director of Bachelorette, a vicious little comedy from 2012. That said, About Last Night isn't a bad movie. It's not great, either, it's just sort of your average romantic comedy with a pair of pleasant but bland leads, each of whom has a colorful sidekick to keep things interesting and the energy up. It isn't ground breaking stuff (unless you consider a film with an all black cast groundbreaking, which, considering the current climate, maybe it is), but it's pretty okay.

Set in Los Angeles, About Last Night centers on the relationship between Danny (Michael Ealy) and Debbie (Joy Bryant), who are introduced to each other by their friends, Bernie (Kevin Hart) and Joan (Regina Hall). In contrast to Bernie and Joan, who are a couple of firecrackers burning up the local scene, Danny and Debbie are a lot more sedate and neither is particularly interested in dating at the moment, still smarting from the breakdown of previous relationships. Nevertheless, they end up spending the night together and a casual relationship forms out of that which eventually becomes a relationship serious enough for Danny to ask Debbie to move in with him (yet, somehow, not so serious that either of them has uttered the words, "I love you" yet, which seems a little backwards). Things are good, at first, but discord slowly begins to creep into their relationship. There isn't really any one thing driving a wedge between them (though the film does overload them with ways and means of driving each other away); it's more mental than anything, as if they've reached the end of a task (find a nice person + commit to being with them = become a grownup) and are looking at the result and asking, "Is this all there is?"

One of the film's strongest aspects is the way that it's able to tap into that sense of happiness as ennui, of commitment as a form of stasis. Everything that pop culture teaches us about love and relationships is that the story is in the process of two people getting together, that the moment they commit to each other is the happy ending. Yet, at the same time, pop culture favors stories about the young, which means that those people get together and it's the "end" of the story, but... they've still got several decades left to go (unless they're in a Nicholas Sparks story). So when Danny and Debbie get together and decide to be a couple and then don't seem to know where to go from there, there's at least a ring of truth to that. Where the film falters is that it doesn't seem to know what to do with them from there, either, and so it throws a series of contrivances at them to drive them apart: Debbie maybe wants to have a baby (and, no, neither one has said, "I love you" yet, which seems like a bad start to that conversation), so Danny buys a puppy as a quick fix (a puppy which she leaves behind without a second glance when they break up, leading me to believe that she's not quite human); Danny quits his job, mopes and wallows in emasculation for a while, and then takes it out on Debbie because she has a good job that she likes and he's jealous of both that and the fact that her boss (Adam Rodriguez) is obviously interested in her; Danny brings his drunken ex-girlfriend home so that she can sleep herself sober; Debbie gets annoyed when Danny shuts down emotionally; Danny is annoyed that he can't just hang out and watch some baseball. The bad starts to feel like it outweighs the good and so they go their separate ways... and yet...

While the volume of contrivances introduced into the relationship don't exactly help the film, it's biggest problem is that it doesn't really give you any reason to root for Danny and Debbie to get back together. They're nice enough people, but they're also really underdeveloped as characters. We know that Danny lost his father and maintains a sense of connection to him by continuing to sit in the same (terrible) seats to watch Dodgers games where he and his father sat when he was a kid, and we know that he's still a bit hung up on his ex. We know that Debbie... to be honest, I've already forgotten just about everything about Debbie. Ealy and Bryant are both fine actors generally, but, even though they're the stars, About Last Night doesn't really give them much to do (and, in Ealy's case, the role apparently requires him to turn his charisma way, way down) nor does it give the viewer much to invest in. By the time it got to the end, I found that I didn't really care whether they ended up together - I mean, at the time of their breakup, they really did seem pretty unhappy together and kind of over each other, so maybe that was for the best? How revolutionary an ending would that have been for a romantic comedy, for two people to come together, realize that they were only compatible for the short-term, and then move on?

Of course, part of the reason that the Danny/Debbie relationship feels like it doesn't work is because the film provides another relationship to contrast it to. This isn't to say that the relationship between Bernie and Joan is particularly functional - they get together, break up, engage in some very public post-break up dramatics, secretly get back together, and then each decides that the other actually is the one for them - but it's easily the most entertaining thing about the movie (and I say that as someone who finds Hart annoying more often than not). The passion and fire on display between Bernie and Joan (and, credit to Hart and Hall, they really go for it in these roles to the point where I imagine that at the end of each scene, both actors were exhausted) just highlights how relatively cool passions are between Danny and Debbie, even when their relationship is going well. This isn't to say that I would want to watch a whole movie based around Bernie and Joan - for scene stealing characters like this, small doses are the most effective - but it's not a great sign for the protagonists when you consistently find yourself wondering when the best friend characters are going to make an appearance to liven things up a bit.
Posted by Norma Desmond at 8:00 AM