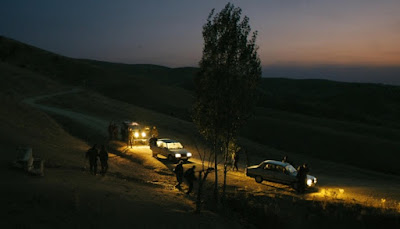 At 157 minutes, Nuri Bilge Ceylan's Once Upon a Time in Anatolia that can't be accused of not taking its time. It's a crime procedural, but not in the way of a thriller where the investigative team is constantly running from one lead to another, working against the clock to catch a bad guy who is always one step ahead until the final showdown when he's finally brought to justice (or death). Once Upon a Time in Anatolia is a crime procedural in a slow, methodical way, one which is not so much about the crime, which is solved before the film even begins and its perpetrators arrested, but about the effect that the process of gathering the evidence has on those tasked with doing it over the course of a very long night. The length and pace of the film might seem daunting at first glance (which could also be said of Ceylan's most recent film, 2014's Palme d'Or winning Winter Sleep), but watching it becomes a completely absorbing experience very quickly.

Once Upon a Time... opens its story from a distance, watching as a convoy of cars winds its way through the deserted roads, the headlights looking almost like streaks of fire illuminating the dark. Finally the cars stop and the various players emerge: the police inspector, Commissar Naci (Yilmaz Erdogan), the officers in his command, Izzet (Murat Kilic) and Onder (Emre Sen), and their driver Arap Ali (Ahmet Mumtaz Taylan), the prosecutor, Mr. Nusret (Taner Birsel), Cemal (Muhammet Uzuner), a doctor, and two suspects, Kenan (Firat Tanis) and Ramazan (Burhan Yildiz). The two suspects are brothers who have confessed to the murder of a man named Yasar and the purpose of this excursion is for them to show the authorities where they've buried the body so that it can be retrieved, examined for evidence, and then finally turned over to Yasar's family for burial. Tensions are high. From the looks of Kenan, who struggles to stay awake as he rides in a crammed car with Ali, Naci, Cemal, and Izzet, it's already been a long night with an exhausting interrogation. Now they've stopped in the countryside and Kenan is confused about where Yasar is buried, explaining that he was drunk when it happened, while Ramazan, who is mentally challenged, doesn't seem to know much at all. Eventually it's determined that they're in the wrong spot, so everyone gets back into their cars and they drive a little further down the road, looking for a place with a fountain and a "round tree."

As the night goes on, the group will go to a few different spots and will argue about where they should go, based Kenan's vague descriptions, and some will grow frustrated (no one more than Naci, who wants to get things over with so that he can go home and pick up the prescription for his son which he forgot to get earlier, and which his wife has been calling him about), while others (particularly Kenan) will simply grow tired. While combing through one scene after another, the darkness and uncertainty making the search difficult, the men talk among themselves, telling each other stories about the unusual things they've seen in their lives and in their respective lines of work. Eventually the men make a stop in a nearby village in order to rest and get something to eat and, during the course of the interlude, Kenan finally reveals why the crime was committed. When day breaks, the search continues and finally finds success, but in certain respects that's only the beginning of the story. The discussions and revelations of the long night reverberate into the daytime, stirring emotions in some of the men that they hadn't anticipated, and the recovery of the body, rather than bringing the case to a true close, instead results in a host of new questions coming to the surface.

Because movies (even great ones) tend to use formulas and audience expectation to form the base on which to build their stories, a film like Once Upon a Time in Anatolia is a challenge because it doesn't conform to what we've been trained to think a movie narrative should be. The story is rooted in a crime, but not only is the crime solved before the film even begins, we actually don't learn that much about it during the course of the film. We learn where the body is buried and why the perpetrator says he was killed, but the details of the crime remain vague and the crime itself is part of the narrative's background as the film's focus shifts outward, to the men involved in the search and what their seemingly casual, immaterial conversations reveal about them. Some of the conversations are "of the moment" and truly do amount to nothing other than banter between characters (there's a long discussion about yogurt, for example), while other conversations reverberate and end up being revisited, particularly a story that Nusret tells about a woman who correctly predicted the exact date of her death, and are used by the film to reveal different layers to the characters' personalities. These layers are unveiled slowly, and in a way that might seem off-putting at first because of the rigorous way that the film explores the minutia of human interaction, but by the end you're sunk so deeply into the characters' psyches that the richness of the film can't be denied.

That richness is achieved not just through the dialogue, but also through the way that Ceylan shifts among the characters as if testing the potential for several of them to be the film's protagonist before settling on Cemal, and in the way that Ceylan frames the characters in any given scene. In Ali's car, for example, everyone is sort of packed into the too-small space, but it's Kenan in particular who draws the eye, both because he appears on the verge of sleep, but also because he's made to look so small in comparison to the other men in the car. He's resting at the center of the image, and yet he's such a minor part of it, just as he's central to the crime, being its perpetrator, and yet a supporting player in the story the film is telling about the crime. The effect is that rather than looking at the issue directly, as most films would, Ceylan instead skews the film's focus ever so slightly to the side in order to look at everything around the crime, offering an entirely different perspective to the procedural story. In its quiet way, Once Upon a Time in Anatolia is a great achievement, one which takes you places that you don't anticipate and which becomes unexpectedly spellbinding as it follows its characters through the night and day of their work. Like Winter Sleep, Once Upon a Time in Anatolia is a masterpiece of patient, character-based storytelling.
Posted by Norma Desmond at 8:00 AM