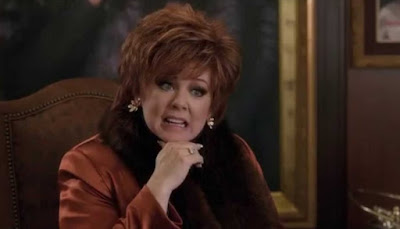 I'll admit it, I'm something of a Melissa McCarthy apologist. I find the most consistent criticism of her - that she plays the same character over and over again - to be kind of lazy as, aside from the occasional foul-mouthed tirade, I don't really see that the ruthless con artist who discovers that she's capable of actually caring about others of Identity Thief, the tough, lone wolf cop of The Heat, the woman damaged by a lifetime of disappointment of Tammy, and the hyper-capable agent hiding inside a meek and submissive persona of Spy have all that much in common. Even the way that the people who surround those characters relate to them is quite different, with Tammy inspiring people's pity at basically all turns, Mullins (of The Heat) inspiring fear of her hair-trigger temper, Susan Cooper inspiring those around her to constantly underestimate her, and Dawn Budgie (Identity Thief), inspiring wariness because she's so clearly a sociopath. I also, generally, admire McCarthy's willingness to go for broke in the interest of getting a laugh, often sacrificing all vanity to get there. That said, The Boss is far, far from her best and her collaborations with husband Ben Falcone continue to be a distant second to her collaborations with Paul Feig

In The Boss McCarthy stars as Michelle Darnell, a motivational speaker whose drive to succeed has made her one of the wealthiest women in America. Her rise to the top has been ruthless and self-serving, as her experiences being shuffled from one foster home to another as a child have left her believing that other people only bring you down and hold you back, and as a result she's made powerful enemies, including Renault (Peter Dinklage), a tycoon with whom she has a feud that goes back several years. When she makes the mistake of bragging to Renault about the means by which she was able to derail his latest deal and swoop in to take the prize herself, she's arrested for insider trading and sentenced to do time in club Fed. All of her assets are seized while she's inside, so that when she's released she has nothing and no one to turn to. Seemingly the only person still willing to speak to her is her former assistant, Claire (Kristen Bell), who is too polite to dismiss Michelle as brutally as she might want to and reluctantly agrees to let Michelle crash on her couch while she tries to get on her feet.

Michelle quickly develops a bond with Rachel (Ella Anderson), Claire's daughter, becoming her de facto caretaker while Claire works at her new job, which she hates, for a boss (Cecily Strong), who she hates. When Michelle accompanies Rachel to her Dandelions group and learns how much money there is to be made selling boxes of cookies, she sees an opportunity to claw her way back to the top. When she meets with resistance from within the ranks of Dandelions, particularly from super type-A mom Helen (Annie Mumolo, co-writer of Bridesmaids), she decides to branch off and create her own Girl Guides-esque group, "Darnell's Darlings," and start selling brownies using Claire's winning recipe. With Rachel's help, she manages to talk Claire into going along with this idea and the two enter into a business partnership, with Claire's desire to use the business to make money and do some good tempering Michelle's desire to simply gain money and power. However, Michelle's still got a lot of enemies out there and their desire to see her crash and burn threatens to undermine the new venture.

Written by McCarthy, Falcone, and Steve Mallory, and based on a character that McCarthy created during her Groundlings years, The Boss is a comedy that only sometimes works. There are moments that are inspired, such as a bit where Michelle and Claire argue over whether or not Claire needs a new bra, and a couple of all too brief appearances by Kathy Bates as Michelle's former mentor turned enemy. Depending on your tolerance for sequences that go so wildly over the top that it makes everything seem more like a cartoon than anything based in reality, you might also include the fight sequence which finds Darnell's Darlings going toe-to-toe with the Dandelions, tearing up a neighborhood in the process (if you've ever wanted to see McCarthy brutally clothesline an 11 year old, this is the movie for you). There are moments in the film that are genuinely very funny, but by and large they're surrounded by moments that are only sort of funny, when they're funny at all.

Part of the problem is how half-baked the story is, resulting in The Boss feeling less like a coherent narrative and more like a series of potential premises waiting to be developed. A whole movie could have been made about Michelle navigating life inside prison, using her cutthroat business sense to become the Alpha of Federal prison (I confess, when this movie was first announced I thought that that was what it would be about, with Michelle being a fictionalized version of Martha Stewart), but instead that plot is more of the blink-and-miss-it variety. Similarly, you could make a whole movie just about Michelle starting and running a Girl Guide empire (although why would you, when Troop Beverly Hills already exists) rather than just using it as a jumping off point for the ongoing feud between Michelle and Renault, which would have slightly more fire to it if we ever knew what, exactly, either of them did to make their money and become famous in the first place (there is a brief flashback which shows them working together at an office of some sort, which illuminates nothing). The Boss is all ideas without follow through, and not nearly funny enough to mask it.
Posted by Norma Desmond at 8:00 AM