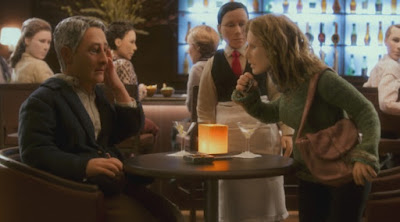 I suppose it isn't saying much to say that Anomalisa is the most straightforward movie to come from writer/director Charlie Kaufman. Known for his brilliantly bizarre, mind-bending works, Kaufman doesn't typically deal in simple premises or simple execution. Anomalisa does not tell a complicated story that necessitates folding the narrative around itself or finding a way to demonstrate multiple levels of consciousness meeting each other and coming into conflict; it's the uncomplicated story of a man battling loneliness and depression who comes to believe that he's been saved from what ails him by a chance encounter. It's totals at a brisk 90 minutes, as it likely must, having been created with puppets and stop-motion animation. It's animated, but definitely not for kids, featuring as it does some very adult themes and a puppet sex scene which, even if you know it's going to happen, may still shock you with how explicit and bracingly realistic it is.

Set in 2005, Anomalisa unfolds over a couple of days in the life of Michael Stone (David Thewlis), a customer service expert touring in promotion of his latest book. His last stop is Cincinnati, where he explains to the friendly and chatty taxi driver that he won't have time to take in any of the sights as his stay will only last long enough for him to give his talk and then return home to his wife and son. The only other thing he intends to do is find a toy store and buy a gift for his son, a plan which turns out very badly due to his lack of clarity when he says that he needs to find an all-night "toy" store. Alone at his hotel, he attempts to prepare to give his speech, but can't stop thinking about his break up years earlier with a woman named Bella, who lives in Cincinnati. He calls her up and she agrees to meet him in the hotel bar for a drink, but things quickly go off the rails. The break up was a bad one, as evidenced by the letter she wrote him after the fact, which he re-reads before working up the courage to call her, and the pain and confusion of it still lingers with her and becomes inflamed when Michael clumsily tries to get her to go to his room with him. She reads him for filth and then storms out, leaving him more despondent than ever.

Alone in his room again later, Michael hears a voice passing by in the hallway and is not merely enchanted, but reacts as if he's been saved. He rushes into the hallway and, finding it empty, begins knocking on doors, looking for the woman in possession of the voice. The woman is Lisa (Jennifer Jason Leigh), a customer service representative who is in awe of Michael and his work and has come to Cincinnati with her friend specifically to see him speak. Convinced that she's unattractive and that no man could possibly be romantically interested in her, Lisa is shocked when Michael invites her and her friend out for drinks and then works himself up to asking to spend some time with Lisa alone. Back in his hotel room, they talk and he tries to draw her out. She's confused about what he thinks he sees in her and he tells her that he thinks she's "extraordinary." When asked why, he replies, "I don't know yet. It's just obvious to me that you are." He believes that it's love and, after they spend the night together, he decides that he's willing to completely burn down his life and start over new with her. And then something horrible, and horribly inevitable, happens.

I said at the top that Anomalisa is Kaufman's most straightforward movie, and it is, but that doesn't mean that it's devoid of some touches that feel distinctly Kaufmanian. The voice of every character except Michael and Lisa is provided by Tom Noonan, the better to put the audience into Michael's mindset. There's a sameness to everyone that he encounters, a sense of everyone blending together and of a monotony which is making Michael's life so deeply unbearable, that it makes the sound of Lisa's distinct voice like a lifeline to him. That feeling of miraculous connection is underscored by a delightfully off-kilter dream sequence during which Michael imagines that it's him and Lisa against the world which is conspiring to keep them apart and keep them from realizing the true happiness that they can only find with each other. Although the characters are puppets, the connection that Kaufman is able to depict as being forged between them really does feel real and special, if a bit impulsive, and Michael and Lisa feel all too human (Leigh was Oscar nominated for her performance in The Hateful Eight, but her performance here is even better).

The storytelling strategies that make Michael's discovery of Lisa feel so illuminating also make what happens next feel so sad. Although the relationship is never perfect (Michael is married, after all), Anomalisa does an effective job at selling Michael and Lisa as soulmates, so when morning comes and the specialness that Michael has attributed to Lisa begins to fade away before his (and our) eyes, it hits hard even as it deepens our understanding of what's ailing Michael and how firmly it is rooted - and how difficult (maybe impossible) it will be to shake. As a character drama mining the psychology of its protagonist, Anomalisa is a rich and deeply considered piece of work, though I confess that it left me just a little bit cold. It has the mixture of humor and melancholy that defines his best films, it just didn't evoke quite the same sense of adoration in me that Being John Malkovich, Eternal Sunshine of Spotless Mind, or Synechdoche, New York did. But, if that's a criticism, it's a criticism of the very smallest kind, as Anomalisa is still a very, very good movie.
Posted by Norma Desmond at 8:00 AM