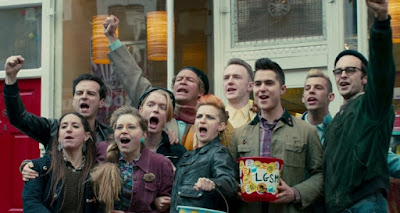 Politics make strange bedfellows - or, maybe it just seems that way because we don't give people enough credit for their capacity to recognize the humanity in others. Based on a true story, Pride is about the alliance between striking miners and gay rights activists in Thatcher's England. As a film, it's right in line with other feel good movies out of the UK centering on working class people rallying in the wake of economic devastation, films like The Full Monty and Billy Elliot. As with all true stories, you have to take it with something of a grain of salt, but the film is so good-hearted, and just so good, that the inclination is to give it a break whenever it might be bending the truth in service of its story. A very funny, but also deeply felt movie, Pride, which managed to snag a Golden Globe nomination for Best Motion Picture Musical or Comedy in 2015 but only managed to gross a little more than $7 million worldwide, is one of the hidden gems of recent years.

Pride views the story of the 1984/1985 UK miners' strike through the eyes of Joe (George MacKay), a teenager who is just starting to inch his way into the gay community, but in as quiet a way as possible so that his family doesn't find out that he's gay. He ends up becoming involved with a group of friends who are politically active and, under the leadership of Mark Ashton (Ben Schnetzer), decide to begin raising money for the striking miners under the banner "Lesbians and Gays Support the Miners" (or LGSM). The group encounters two problems immediately, the first being that there aren't a lot of people in the gay community willing to help raise money for the miners, as they assume that the miners are just like all the other people who discriminate against and abuse them on a day to day basis. The second problem (which sort of confirms the validity of the first) is that the miner's union is unwilling to accept their help because it doesn't want to be publicly associated with a group of homosexuals. Despite these set backs the LGSM, which also includes Mike (Joe Gilgun), Stephanie (Faye Marsay), Jonathan (Dominic West), Gethin (Andrew Scott), Stella (Karina Fernandez), Zoe (Jessie Cave), Jeff (Freddie Fox), Ray (Joshua Hill), and Reggie (Chris Overton), persists and they eventually hit on the idea of bypassing the national union entirely and making their pitch to one local branch directly.

The location they choose is Onllwyn, a small village in Wales, where they finally find a receptive audience. After Dai (Paddy Considine), a leader of the local union, comes to meet with them and proves to be a lot more open minded than they had presumed he would be, the LGSM travels to Onllwyn to meet the rest of the community, where they receive a mixed reception. Many people, including several leaders of the Women's Support Group such as Hefina (Imelda Staunton), Sian (Jessica Gunning), and Gwen (Menna Trussler), and some of the miners such as Cliff (Bill Nighy) and Carl (Kyle Rees), gratefully accept the LGSM's help and come to form genuine friendships with the members. Others, however, are more hostile, including Cliff's sister-in-law, Maureen (Lisa Palfrey), who is part of the Women's Support Group and engages in an ideological war for control of the hearts and minds of the village. No matter how much money the LGSM is able to raise, she remains unpersuaded of the value of their contribution, preferring to dismiss them outright as being deviants, and once news of the LGSM's assistance to the miners starts to become public, and members of the community start to become the subject of mockery for it, her efforts to break up the alliance become increasingly likely to succeed.

Working from a screenplay by Stephen Beresford, Pride begins from a place of assuming that most people are basically decent, open-minded human beings. Though there's a little bit of wariness on both sides as a result of the LGSM members having some preconceived notions when they meet the people of Onllwyn and the people of Onllwyn having some preconceived notions of their own, in most cases it doesn't take much to bridge the gap. Dai comes to London to officially accept the help of the LGSM, who then take him to a gay bar in order to speak to other members of the community, and though the speech that Dai gives gets off to a little bit of a rocky start, by the time he's finished, telling the crowd that "when you're in a battle against an enemy so much bigger, so much stronger, than you, to find that you had a friend you never knew existed, that's the best feeling in the world," a bridge has effectively been built. Gradually, that feeling spreads through much of Onllwyn once the LGSM begins making regular excursions out there and the people of the village discover that the people in the LGSM are just, well, people, not really so different from themselves. Though the film gets some mileage out of the culture shock of a bunch of (mostly) young urbanites mixing with a bunch of (mostly) middle aged people from a rural area, the joke is never really on either side. The people of Onllwyn aren't depicted as hicks, and the members of the LGSM aren't depicted in stereotypical fashion either; the comedy comes largely from each side surprising the other by subverting expectations.

That said, Pride doesn't view its story through rose colored glasses, either. Many of the people in Onllwyn come to embrace the members of the LGSM as friends, but there's always an element of prejudice that the LGSM has to contend with, particularly once their support of the miners becomes public, and there are incidents of gaybashing that occur, and the spectre of HIV/AIDS hovers around the margins of the narrative. Pride is based on actual events and some of the characters, including Mark and Jonathan, are fictionalized versions of real people, and in real life Mark Ashton passed away in 1987 at the age of 26, while Jonathan Blake was one of the first people in the UK to be diagnosed with HIV and is now 66, having lived with HIV since 1982, and the film is able to address the health crisis that was at the time stigmatized as a "gay plague" in a way that is poignant, while still keeping the focus of the narrative on the relationship between the miners and their families and the members of the LGSM. Amazingly, many of the most moving moments in Pride are recreations of things that actually happened, including the very public show of solidarity at film's end. Pride is just a movie, and one that, for the most part, takes a light-hearted view of its subject, but in its way it's a very affirming film about the basic decency of people and their ability to overcome their differences and preconceived notions. Not bad at all for a film that also manages to be wildly entertaining.
Posted by Norma Desmond at 8:00 AM

I really enjoyed this film too when I saw it last year. I was rather surprised that it wasn't more widely seen.