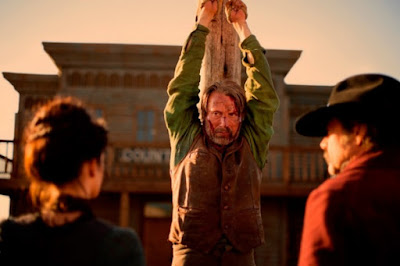 The frontier was the dividing line between civilization and lawlessness, a place where only the strong could survive, and where good men might have no choice but to become bad. Kristian Levring's western The Salvation might instead have been called "The Descent," centering as it does on a man trying to build a life in the middle of a dusty nowhere who loses everything and then goes on a mission of bloody vengeance. Even if genre tropes didn't exist, you might guess at his success simply by the fact that he's played by the formidable Mads Mikkelsen. The Salvation may not be a great western, sticking as it does to some pretty by the books plotting, but it's a decently entertaining one regardless of how many cliches it relies on and it fits in nicely with the kinds of B-movies that once made up the bulk of the American cinema landscape.

Mikkelsen stars as Jon, a Danish immigrant who, along with his brother Peter (Mikael Persbrandt), has been living for several years in the American west and establishing a new life after leaving their home country as a result of their devastating experiences in the Second Schleswig War. As the film opens, Jon has traveled into the closest town to be reunited with his wife and young son, from whom he has been separated for many years, but their happy reunion quickly turns to tragedy. When they board the stage coach that is to take them out to Jon and Peter's remote homestead, they're joined by two men who have just been released from prison and have been celebrating by getting drunk, and who start to get hostile as soon as they lay eyes on Jon's wife and try to engage her in conversation, only to be rebuffed. In the confrontation that ensues, Jon gets tossed from the coach and isn't able to catch up to it until after the two men have murdered his son and the driver and are in the midst of raping and fatally wounding his wife. Jon kills the two men, but his wife dies and he brings her body and that of their son back to the homestead, where Peter helps to bury them. Emotionally broken, the two brothers decide to sell their property and try to start over yet again somewhere else.

Unbeknownst to them, however, is the fact that one of the men that Jon killed is the brother of a man named De La Rue (Jeffrey Dean Morgan), the leader of a gang that essentially owns the nearby town, having brutalized and intimidated the townspeople into submission and regularly extracting a tax from them in exchange for "protection." Upon learning that his brother has been murdered, he demands that the killer be found, and then takes up with Madelaine (Eva Green), his brother's widow - who, even if she could physically speak (as a child her tongue was cut out by the people who murdered her parents), wouldn't have much say in the matter. When Jon and Peter come into town to sell their land to the Mayor (Jonathan Pryce), who has secretly been helping De La Rue (who is himself working for the Standard Atlantic Oil Company) buy up all the land in and around the town, Jon is recognized as having been the man who caught the same coach as De La Rue's brother and he's arrested and handed over to the gang. But what De La Rue doesn't count on is that Jon, despite having lost everything, is tenacious enough to want to live if only long enough to kill the members of the gang, or that Madelaine has some plans of her own.

Although not actually filmed in America (the film was made in South Africa), The Salvation captures the dusty, sundrenched and wide-open vistas of the wild west of imagination and low budget B movies of the genre's glory days. Even without the presence of the De La Rue gang, you would believe that the land depicted in the film would be one defined by hardship, which in turn makes Jon's transformation into a killing machine a little more believable: after enduring so much to make a home and finally be able to bring his family to live in it, only to have every member of his family brutally snatched away, it's no wonder Jon is just crazy enough to go in guns blazing towards an almost certain death. Although it's directed in a sort of rudimentary way, The Salvation tells a classic and solid enough revenge story (and, when you think about it, it's actually telling two revenge stories, one belonging to Jon and the other belonging to Madelaine), complete with a hero who finds himself having to battle against townspeople who are weak-willed and self-preservingly apathetic, that it works more often than it doesn't.

It helps that the film puts so much of its narrative on the shoulders of Mikkelsen, an actor as capable of exuding quiet decency as smoldering menace. Here he plays a good man who is pushed to the breaking point, a man who doesn't say much through the course of the film but who never fails to express where he's at mentally and emotionally in any given scene. Green creates a similar effect with Madelaine, who doesn't speak at all but always appears to be silently and subtly calculating the odds of her escape in any given scene. Green tells so much of the story with only the shifting expressions of her face that it makes you wish The Artist had inspired a slew of modern silent movies, as she makes a case for herself as a potential master of the form (pair her with director Guy Maddin and the results would be magical). The weak spot, unfortunately, is Morgan as the villain, delivering a performance that's more "sleepy" than "scary." Still, The Salvation is a fine work of wild west nastiness that offers some vintage style thrills.
Posted by Norma Desmond at 8:00 AM