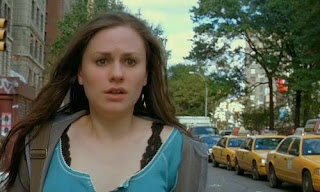 If nothing else, Kenneth Lonergan's Margaret is one of the great cinematic curiosities of the last decade. Filmed in 2005 but not released until 2011, subject to multiple lawsuits in the years in between, and not truly completed by Lonergan until the 2012 extended cut DVD release, it died a quick death at the box office (not that it had any other choice: it was only in theaters for four weeks and never in more than 14 theaters at once) but gained something of a second life thanks to being embraced and championed by critics. I can't speak to Lonergan's DVD cut, but Margaret's theatrical cut is a wounded beast of a film, one with grand ambitions, pieces that don't always fit together elegantly, and deep, visible scars from its long production process. It's a film that doesn't always work, but it remains compelling nevertheless.

Margaret centers on Lisa Cohen (Anna Paquin), a 17 year old who lives in Manhattan with her actress mother, Joan (J. Smith-Cameron), and her younger brother, and has a distant, but not unaffectionate, relationship with her father (played by Lonergan), who lives in California and with whom she's about to go on holiday to a dude ranch. In preparation she's out looking for a cowboy hat and spots a passing bus driver (Mark Ruffalo) wearing one. Wanting to know where he got it, she runs alongside the bus trying to get his attention and they proceed to have a conversation, of sorts, through the closed doors. As they're interacting the bus runs a red light and ends up hitting a woman crossing the street (Allison Janney), fatally injuring her so that she dies in Lisa's arms while asking her to contact her daughter. When the police arrive at the scene, Lisa lies about the light being red out of concern that the driver might have a family to provide for and could lose his job as a result of the accident. Almost immediately, however, she begins to feel guilty not just about the lie, but about the part she played in the woman's death. Wanting to make things right, she seeks out the driver, who pretends that he has no idea what she's talking about when she puts her version of events to him. Offended by the driver's prevarication, Lisa seeks out the family of Monica, the dead woman, and is directed to her friend, Emily (Jeannie Berlin), the executor of her estate. Wanting to find a way to make things morally square, Lisa confesses to Emily that she lied to the police and then recants her statement in an attempt to force the bus driver to face the consequences of his actions.

The various legal maneuverings and moral questions surrounding Monica's death account for the majority of Margaret's story, but by no means all of it. Lisa's intense and confused feelings about the accident, combined with some more generalized teen angst and post-9/11 anxiety, lead her to lash out in various ways. She fights with her mother, whose concerns about the success of her play and her budding relationship with a new boyfriend (Jean Reno) strike Lisa as shallow and insignificant compared with what she herself is going through; she alternately draws in and then pushes away a boy who likes her, and then opts to invite a different boy over to her apartment for sex, though she knows that he has a girlfriend, all while slowly circling her math teacher (Matt Damon), seeking adult guidance and validation from him, but also using his sympathy as a means of getting close to him and pushing their flirtation to the next level (not that he tries particularly hard to resist her advances); and she hijacks classroom discussions, often engaging in screaming matches with a classmate of Syrian descent over issues involving international politics and terrorism.

While Lisa sees herself as someone who feels things passionately and others often see her as someone prone to succumbing to melodrama, the film itself is a bit more generous, depicting her as someone struggling through a difficult time in the transition from child to adult and trying to figure out how she fits into the world. The process is complicated by her inclination towards self-absorption and the immaturity which prevents her from seeing the world and people around her in their fullness and agency and instead allows her to only consider them as filtered through herself, something which is perfectly (though painfully) summed up in a scene between Lisa and Emily where the former provides some key and very intimate details about Monica's dying minutes and the latter lashes out at her for treating Monica, her death, and her daughter as props to be used in a scene from the movie of Lisa's life which exists only in her own head. Berlin is brilliant in the scene as the unforgiving Emily, tearing a strip off of Lisa, her deep grief overriding whatever inclination she might have to cut Lisa some slack for being a kid in over her head and not really appreciating the consequences of her words and actions, and Paquin is equally great as Lisa, transitioning her through a host of emotions and poses. When she starts telling the story, it's clear that Lisa believes what she's saying is something that will endear her to Emily, to whom she's grown close as they work on the legal case and as Lisa's relationship with her own mother grows increasingly strained. When it becomes clear that Emily does not accept the story as something moving or poignant, but rather something told out of selfishness on Lisa's part, Lisa becomes defiant and argumentative, trying to engage Emily in the same way that she engages her classmate nemesis. When Emily shuts her down and shows her to the door, Lisa suddenly becomes apologetic, realizing that she's gone too far and that she's trampled on Emily's feelings in a way that might cloud their relationship forever after. It's a wonderfully complex and rich scene and it's to Paquin and Lonergan's credit that Lisa is allowed to be a character who can be as unlikeable and selfish (even as she imagines herself being selfless) as she so often is here; Margaret tells a story that exists in a series of moral gray areas, so it's only fair that the protagonist exists in shades of gray as well.

In many respects, Margaret is a film to be admired. It is fearless in its depiction of its protagonist, frank in its treatment of her sexuality and the impulsiveness (and sometimes thoughtlessness) that drives her into various sexual or romantic situations, and it has a lot of big ideas that it plays with in terms of the post-9/11 psychological state of mind coupled with the seemingly random circumstances which determine who lives and who dies and when, and with the idea of assigning and accepting accountability for the role one person or entity might play in a tragedy. Margaret can be accused of many things, but it can't be accused of being a film without purpose. That said, it is a very messy film (though some might argue that that's appropriate), one with ideas that don't always connect, subplots that appear out of nothing and then disappear, threads left hanging and characters abandoned, and an out of nowhere revelation that Lisa makes to another character in the third act (in fairness to Lonergan, I understand that there's greater set up to the revelation in his longer cut; however, in the theatrical cut it comes from so far out of left field that it seems like something Lisa says merely for shock value rather than because it has any kind of truth to it). Lonergan also makes the questionable decision to cast a then 23 year old Paquin as a 17 year old, which might not feel so out of place were it not for the fact that he then surrounds her with young actors who look like infants in comparison. Still, I would recommend Margaret on its strengths, as its little sins are nothing in comparison to its big virtues.
Posted by Norma Desmond at 8:00 AM