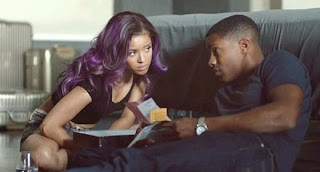 For a film which lays out all its major themes in fairly blunt fashion within about the first thirty minutes, Gina Prince-Bythewood's Beyond the Lights unfolds with incredible grace and subtlety. Released late last year and more or less abandoned (it played in theaters for only 12 weeks, playing at over 500 theaters for only 5 of those weeks and at less than 100 for the remainder), this romantic drama is one of 2014's hidden gems. If there were any cinematic justice in the world, between this film and Belle, 2014 would have been the year of Gugu Mbatha-Raw, a consistently fantastic actress who deserves more high profile roles. However, if "high profile" ones aren't forthcoming, then at the very least hopefully she can continue working in challenging, well-conceives roles like this one.

First introduced as a young girl singing Nina Simone's "Blackbird" in a talent competition, the star at the center of Beyond the Lights is Noni (Gugu Mbatha-Raw), an up-and-comer whose first album is about to be released but who already has several hits to her name courtesy of a series of collaborations with rapper Kid Culprit (Machine Gun Kelly). Despite having technically achieved her dream of making a living as a singer, Noni is miserable, her personal identity having been completely undermined by the public persona which has been carefully crafted by others, including her fierce stage mother turned manager Macy (Minnie Driver). Despairing during a brief moment alone, Noni goes out onto her hotel balcony and prepares to jump and is prevented from doing so only by the intervention of Kaz (Nate Parker), a police officer who has taken a shift as Noni's private security guard for the night. After the fact the incident is played off as a drunken accident, a story that Kaz reluctantly goes along with when asked to participate in a press conference, and then Noni and Kaz go their separate ways - or, at least, they're supposed to. Instead the two find themselves drawn to each other and begin a relationship despite Macy's insistence that Noni needs to distance herself from the "incident," which means distancing herself from Kaz, too; and despite the insistence of Kaz's father (Danny Glover) that he needs to distance himself from Noni and her less than wholesome public image for the sake of his political ambitions.

Despite the pressure from their families and their respective handlers, not to mention the tabloid press which becomes increasingly interested in the relationship after Noni is publicly humiliated during a performance with Kid Culprit, Noni and Kaz continue their relationship and eventually slip away to Mexico so that Noni can get out of the spotlight and have some time to rest and collect herself mentally. During their period in hiding together, Noni begins to shed the marks of her public persona, removing her weave, dressing in casual clothes, and singing her version of "Blackbird" when she and Kaz go to a bar and decide to do some karaoke. Although she has succeeded at flying under the radar up to this point, a video of her karaoke performance makes its way to the internet and quickly goes viral and as a result the tabloids and Macy descend on Noni and Kaz's getaway. While Kaz thinks Noni still needs time to get herself together and become stronger, Macy says all the right things to make Noni believe that things will be different, that she can still attain her dream but do it her own way now and become the subject of her narrative rather than everyone else's object. Because Kaz doesn't believe that Macy is sincere in what she's saying, Noni finds herself having to make a choice between staying with him, or giving her mother one last chance to prove that she really is on her side and can make her dream come true the right way.

Thematically, Beyond the Lights has a lot going on, which it manages to express in a way that is clear without being done in a way that makes you feel like you're being hit over the head it. The film's major issue is identity and it's one which, in this case, has many layers to it. Having been raised solely by her mother after her father abandoned them, Noni is particularly bonded to Macy and in ways that are often isolating in terms of how Noni is able to engage with other people. That she's gotten to where she is in her career is as much a result of her talent as it is Macy's tenacity, and so there's an "us against them" mentality to their relationship that makes it difficult for outsiders to come in, even though that relationship is poisoned by Macy's desire (unconscious or not) to use Noni's success as a way to sticking it to all the people who turned their backs on them, and by Macy's willingness to push Noni's career forward in ways that are detrimental to Noni's mental health. At the same time, though the two have a strong bond, there are ways in which the two have difficulty connecting as a result of Noni being biracial and Macy being white. When we first meet them when Noni is a small child, Macy is running around London desperately trying to find someone who can do something with Noni's hair because Macy herself is at a loss. They eventually find Felicia (Deidre Henry), a hairdresser who, though she's closed her shop for the day, takes a little bit of pity on the clearly exasperated Macy and lot of pity on the little girl whose hair is a mess because her mother doesn't know how to comb it. It's telling that Felicia ends up becoming a lifelong presence in Noni's life from that point on, even as Noni's growing success means that she has been pushed to conform to standards of beauty meant to make her more appealing to white audiences. As part of that process Noni is also sexualized and put on display, her femaleness turned into a commodity that buys her entry into a male dominated sphere. But while the misogynist aspect of Noni's public persona is enough to make one feel queasy, there's also a racial undercurrent to it that finally explodes when Kid Culprit, a white rapper, degrades Noni on stage in a scene that says it all with respect to the way that women, but in particular women of color, are exploited in pop culture for the pleasure and profit of men, and in particular of white men.

Beyond the very political concerns regarding identity, race, and gender at work in Beyond the Lights, the film also offers a love story which is compelling even as it hits all the familiar beats of the backstage drama/romance. Of course Noni and Kaz will get together despite their very different backgrounds and career ambitions which seem to be at odds with each other, and of course they will come to a point where the relationship is tested, and of course there will be a "big moment" at the end where love wins. That you can see all that coming doesn't really matter because what makes a story good isn't necessarily its unpredictability, but the skill with which it navigates itself from beginning to end. Beyond the Lights is a work of melodrama, but it's an expertly constructed work of melodrama that centers on two fully realized and compelling characters and places them in the hands of two actors giving great performances. Mbatha-Raw gets the film's big emotional arc, but Parker, whose character's experiences (and in particular his relationship with his father) quietly mirrors those of Noni, is still called upon to guide his character through a growing experience of his own. Though Kaz is referred to as "hero" by several characters throughout the film, his character ultimately isn't about being the man who "saves" the woman; rather, he's the person who sees Noni for who she really is and supports her until she has the strength to stand up for herself and what she really wants, and she ultimately does the same for him. It's to the film's credit that it can pull that off, just as it is to the film's credit that it manages to portray Macy in a way that is critical but not without sympathy. As played by Driver, you can believe that Macy truly does want Noni to succeed and that the often horrible things she does are because she doesn't want Macy to settle for second place simply because the establishment doesn't want to reward someone like her with first. Undoubtedly there's an element of selfishness mixed in there as well, which Noni will eventually call out, but there's genuine love there, too, and the film's willingness to allow Macy to be a complex character rather than a cardboard villain is part of what makes Beyond the Lights so unusually good and such satisfying a film.
Posted by Norma Desmond at 3:20 PM