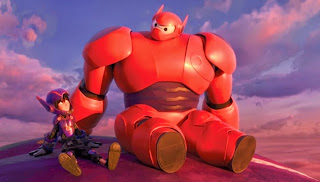 At the risk of sounding ridiculously easily to please, Big Hero 6 probably could have been nothing more than 90 minutes of its inflatable robot shuffling around and trying to maneuver its large frame in small spaces and I would have been entirely satisfied with it. The film, inspired by the Marvel comic series of the same name, is a lot more ambitious than that, though, and works well as a piece aimed largely at a younger audience but possessing appeal to people of all ages, and works as both a stand alone film and as the first entry in what will likely become a series. I'm not convinced that Big Hero 6 should have won the Oscar over the magnificent How to Train Your Dragon 2 (perhaps the third entry in that series will have better luck than the first two), but it's without question a fun, entertaining, and even sometimes moving film.

Set in the city of San Fransokyo, a city with a San Francisco layout but with a distinctly Japanese twist, the hero of Big Hero 6 is Hiro Hamada (Ryan Potter), a 14 year old genius who, along with his older brother Tadashi (Daniel Henney), has been living with his aunt Cass (Maya Rudolph) since the death of his parents. Having graduated from high school at 13, Hiro spends most of his time building robots and then taking them to participate in illegal robot fights, a hobby which gets him into no small degree of trouble. Wanting to shift Hiro's interest to something more productive, Tadashi brings him to have a look at the robotics lab at the university he attends, where Hiro is dazzled by the work being done by Tadashi and his classmates, GoGo (Jamie Chung), Wasabi (Damon Wayans, Jr.), Honey Lemon (Genesis Rodriguez), and Fred (T.J. Miller), and decides to enroll in the program himself. In order to gain admission Hiro must make a presentation to Professor Callaghan (James Cromwell) and when he does so he impresses both the Professor and industrialist Alistair Krei (Alan Tudyk) with his "microbots," a series of tiny robots that come come together to form any shape and do anything that the wearer of a special headband can imagine. Hiro gains admission into the program but as he and Tadashi are leaving to celebrate with their friends, a fire breaks out in the building and Tadashi rushes to rescue Professor Callaghan, only to end up being killed along with him in the blaze.

In the wake of his brother's death, Hiro becomes withdrawn and depressed until he accidentally activates Baymax (Scott Adsit), the robot healthcare companion that Tadashi had been developing. Thanks to Baymax, Hiro discovers that his microbots have been co-opted by a mysterious masked man for some nefarious purpose. Hiro then reprograms Baymax to equip him with some fight moves and provides him with some specially made armor, and then gets GoGo, Wasabi, Honey Lemon, and Fred to use their knowledge to build themselves specialty weapons and join with him to form a superhero team. Together the six discover the masked man on an island which has been locked down for quarantine and where video shows that the island was once used as a testing ground by Krei for teleportation technology and that the experiment ended in disaster. When the group is then attacked by the mask man, his identity is discovered during the fighting and Hiro's grief over the death of his brother transforms to rage and bloodlust and his efforts to destroy the man rather than bring him to justice put him at odds with the rest of the team, including Baymax. After regrouping and getting hold of his emotions, Hiro and the team agree to make another attempt to catch the villain, agreeing that this time they'll do it right.

Although there are a lot of thematically heavy elements woven into the story - from the death of Hiro's parents and brother, to his feelings of grief and depression, to his (and another character's) desire for revenge - Big Hero 6 is ultimately a very fun movie that unfolds with a very light touch. It's a beautifully (often stunningly so) animated picture and, as written, finds a solid balance between the fun stuff like the team creating their special powers and learning to use them properly, and the heavy stuff such as the aforementioned issues that Hiro faces throughout the movie and the inevitable climactic sacrifice that makes the happy ending possible. As strange as it is to say about an animated film, it's also refreshingly diverse in terms of its voice cast and their characters' onscreen depictions. Each member of the supporting cast of heroes brings something fundamental to the success of the film and to the success of Hiro's character arc specifically, and though the job of Adsit as the voice of Baymax is essentially to be neutral and, well, robotic, there's a touch of humanity to his work that really sells the friendship between the human boy and the balloon-like bot. Big Hero 6 is a film with a lot of heart, which helps it become more than just another action tale (or "origin story," as one of the characters points out in a moment of meta commentary), and if a sequel can capture that same attitude, then it will be more than welcome.
Posted by Norma Desmond at 8:00 AM