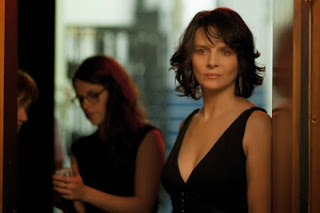 The key is that the older woman and the younger one are, in fact, one and the same, just at different ages. So argues the younger woman, at any rate, as she tries to help the older one figure out how to play her character. Olivier Assayas' Clouds of Sils Maria is a story about two women working at unraveling a story about two women and like 2011's Certified Copy, another recent and excellent film starring Juliette Binoche, this is one in which the lines between "fact" and "fiction" blur often, sometimes even from one sentence to the next within a scene. It's a film that you really need to pay attention to, and perhaps even watch multiple times, in order to get its full effect as it is so rich in meaning. It is also beautifully, artfully made, full of shots and moments which stun you with how aesthetically entrancing they are. Clouds of Sils Maria is a film that can leave you feeling unbalanced from time to time, but it's also one that your mind will keep turning back to long after the fact.

Binoche stars as Maria Enders, a famous actress who is just beginning to age out of cultural relevance. She still gets high profile roles, but she's grown bored with much of what she's offered and tells her assistant, Valentine (Kristen Stewart) that she's done hanging from wires in front of green screens. As the film opens, the two are on their way to Zurich, where Maria is to accept an award on behalf of her mentor, Wilhelm Melchoir, a writer/director who gave Maria her big break in his play (and its film adaptation) "Maloja Snake." En route, Maria receives word that Wilhelm has died, having suffered a heart attack while hiking. She is devastated by the loss and when she attends the awards ceremony, which becomes a sort of tribute to Melchoir, she's approached by an up and coming director who wants to do a new version of "Maloja Snake," which centers on the volatile relationship of a younger woman who enters into an affair with an older woman, manipulating and using her and eventually driving her to suicide. The first time out Maria played Sigrid, the younger woman. Now she's being asked to play Helena, the older one.

Maria balks, at first, at the notion of playing the role of the older woman, arguing that she identifies so much and so deeply with Sigrid that she could never play Helena, but she's talked around to the idea by her agent and by Valentine. Though she changes her mind about going through with it several times, Maria begins to prepare for the role, trying to find a way to understand and empathize with a character that she's always viewed as unforgivably weak and pathetic, while also trying to find a way to take her new co-star, a troubled tabloid regular named Jo-Ann Ellis (Chloe Grace Moretz), seriously. Though she claims a theatrical background, Jo-Ann is best known for the sort of CGI blockbusters that Maria claims to have left behind her, and for interviews in which she appears to be under the influence, and Maria alternates between seeming to find Jo-Ann ridiculous and finding her threatening for the way that she seems to effortlessly command the spotlight, taking it away from Maria herself. Her nerves frayed before the play has even begun rehearsals, Maria struggles to make sense of Helena as a character while she and Valentine are tucked away in the seclusion of Melchoir's home in the mountains. All alone together, however, the relationship between Maria and Valentine begins to parallel that of Sigrid and Helena in interesting ways.

As written by Assayas, Clouds of Sils Maria is a story that unfolds by folding back on itself, revealing and concealing in equal measure. During scenes where Maria and Valentine are running lines together, there's a constant shifting between the "real" and the "fake," with certain lines of dialogue seeming like they could come from the play or just as easily be coming from Maria and Valentine themselves. As the film progresses - and, in particular, as the time that Maria and Valentine spend alone together increases - the dynamic between the two women begins to echo that of the characters in the play, but not necessarily in the way that one might expect. Late in the film Valentine argues that Helena is Sigrid, that she's the woman that Sigrid eventually becomes, and that notion speaks deeply to the way that Maria is characterized by the film. She's now Helena's age and there are some superficial similarities between her and that character (such as, for example, the way that each finds herself despairing as she fails to garner the attention that is now being lavished on a younger woman), but she still identifies with Sigrid and in her relationship with Valentine, she is the Sigrid despite Valentine being younger. Valentine gives everything to her, gets emotionally beaten up by her association with her, and then exists the story in a way that recalls, without necessarily repeating, Helena's exit from the play. Maria is both Sigrid and Helena now, but she struggles to accept the Helena side of herself because to her Helena represents death. Early in the film, she states that her reluctance to play Helena is because she associates the role with death, as the actress who played Helena opposite her died shortly thereafter, but what she really fears is death of a more metaphorical kind. To embrace the role of Helena, and what it means to be playing Helena, means accepting that she has grown older in an industry that values youth in women above all. It means accepting that she no longer "belongs" in a culture that has shifted away from her experience and comfort zone, a point which the film subtly explores through her relationship with Jo-Ann, whose fame is entirely different from Maria's own at that age courtesy of the ubiquity of the internet and social media. Maria doesn't understand the type of fame that Jo-Ann is experiencing, and as she continuously Googles Jo-Ann and watches videos of her on YouTube, she is truly an outsider looking in.

Assayas plays a lot with ambiguity here, not just in terms of the merging of the real relationship between Maria and Valentine and the invented relationship between Sigrid and Helena, but with the idea of personal narrative in general. Facts are presented and statements made at certain points in the film which are contradicted later - Melchoir is said to have died of a heart attack, but Maria later learns from his widow that it was suicide; Jo-Ann comes to Switzerland to meet Maria in preparation for the play, but in reality has an ulterior motive and is using the meeting (and the play, which will be staged in London) as a cover for what she's really up to; Maria professes to hate Henryk Wald (Hanns Zischler), an actor who, like her, was a favorite of Melchoir's and tells Valentine several different versions of what happened between them in the past, at various times scoffing at the notion that she would ever have been romantically involved with him and admitting to having had a fling with him (not to mention that she acts as though she disdains him now, yet sets herself up for a humiliating rejection at his hands) - the "truth" is constantly being rewritten by the characters, with the characters moving easily from one version of the truth to another.

In the central role, Binoche is (per usual) marvelous, playing a woman who is in transitional period in her career and in her life and doesn't always quite know where she stands. She has a star's bearing and expectation of being treated like "a star," and yet as the film carries on she becomes less and less secure in that identity (there is a great, wordless scene where Maria, Jo-Ann, and their director have to flee the paparazzi and Maria almost gets left behind as the director puts all his energy into "protecting" Jo-Ann - the expression on Binoche's face says it all about how actresses become invisible once they hit a certain age). It's a performance which makes the most of the very meaty, dramatic material on hand, but it's also a surprisingly playful and funny performance at times, such a wonderful sequence where Maria and Valentine go to see Jo-Ann's latest movie. As the film watches them watching the movie, Binoche's Maria plays with her 3D glasses, looking increasingly irritated, and then when the two go out for a drink afterward to talk about the movie and Valentine earnestly tries to explain why Jo-Ann is compelling in her role despite it being in what appears to be a throw away science fiction/dystopia/super hero blockbuster, Binoche literally does a spit take (and a good one!) as Maria utterly fails in her attempt to give Valentine's opinion genuine consideration. As her counterpart, Stewart's somewhat flat screen presence becomes an asset as her character tries (and repeatedly fails) to get on the same wavelength as Maria and becomes increasingly defeated by her inability to get back even the smallest fraction of what she's put in to this relationship. I've never been totally sold on Stewart as an actress, but she more than holds her own against Binoche and the dynamic that the two create together is fascinating to watch.

Clouds of Sils Maria is a film that I had to sit with for a while before getting around to writing about it (it's been a little over two weeks since I saw it, to be honest) because I wasn't entirely sure how I felt about it. I knew that it was beautifully shot and expertly acted, but I couldn't quite decide whether it was "really good" or "truly great." In thinking about this film, I also found myself thinking about Assayas' last collaboration with Binoche, 2008's Summer Hours, a film which immediately after seeing it I considered really good but have since come to think of as truly great in large part because it has so thoroughly stayed with me. There's something haunting about Clouds of Sils Maria just as there is about Summer Hours and I suspect that it, too, will stand the test of time.
Posted by Norma Desmond at 8:00 AM