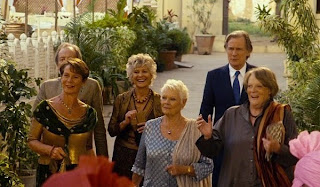 I don't think that it's damning The Second Best Exotic Marigold Hotel with faint praise to say that it's exactly the movie you expect it to be. It's light, enjoyably (almost comfortingly) formulaic, and a shared showcase for the considerable talents of several fine actors. It's not trying to be anything more than what it is, and while one might argue that it has no true purpose for existing, you could say the same for at least half the movies released in any given year, few of which manage to be even half as charming. So, while it may not end up on any best lists at the end of the year, The Second Best Marigold Hotel is the sort of gentle, low stakes drama that makes for a nice diversion in this quiet period before Hollywood kicks its summer blockbuster season into gear.

The Second Best Exotic Marigold Hotel opens with unlikely partners Muriel (Maggie Smith) and Sonny (Dev Patel) in the United States, meeting with potential investors for the planned expansion of Sonny's "Hotel for the Elderly and Beautiful" and being told that an inspector will be sent to check out their operation and assess its potential. On their return to Jaipur they get to work at preparing for the inspector while Sonny is also preparing for his wedding Sunaina (Tena Desae), though his growing anxiety about her friendship with her brother's best friend Kushal (Shazad Latif) could derail those plans entirely. Meanwhile, the other residents of the Marigold Hotel pick up more or less where they left off at the close of the first film: Evelyn (Judi Dench) and Douglas (Bill Nighy) are still slowly moving towards romance and each has integrated into the community through work, Douglas as a tour guide (albeit one who doesn't remember much of the information he's supposed to be imparting) and Evelyn as a buyer for a textile company; Norman (Ronald Pickup) and Carol (Diana Hardcastle) are firmly in a relationship, though each continues to wonder if there might be something else out there and are tempted to test those waters; and Madge (Celia Imrie) is still out to land a wealthy husband and now juggles two suitors, unable to choose between them. They are soon joined by two new visitors, Lavinia (Tamsin Greig), who has come to check out the hotel on behalf of her mother, who is looking for a place to retire; and Guy (Richard Gere), who claims to have come to Jaipur to work on his novel, though Sonny suspects that he's really the inspector trying to be incognito.

While Sonny expends all of his energy trying to impress Guy, whose attention quickly begins to drift towards Sonny's mother (Lillete Dubey), his relationship with Sunaina becomes increasingly undermined by both his jealousy of Kushal, who not only always seems to be around but ends up buying the hotel that Sonny had intended to purchase and turn into the second franchise in his business, and by his treatment of everything and everyone in his life as secondary to his business interests. While Muriel holds her tongue but tries to nudge Sonny in the right direction, the other residents are in the midst of their own crises. Douglas wishes to make his relationship with Evelyn official, but the idea makes Evelyn nervous and she consistently runs away from him, uncertain that she's ready to take that leap. Norman makes the mistake of saying the wrong thing to the wrong person and accidentally puts Carol's life in danger and in his attempts to come to her rescue he discovers something that he would have preferred not to know. Meanwhile, Celia's pursuit of financial comfort along with companionship has resulted in two men proposing to her, but she can't decide which she would prefer to marry and slowly comes to realize that, perhaps, her future lies with a man she never would have expected.

As with the first film, The Second Best Exotic Marigold Hotel is directed by John Madden from a screenplay by Ol Parker, and it is very much cut from the same cloth as the previous film. Some might say that it's cut from too much of the same cloth as the first, and it's difficult to argue that the first film left the various storylines without anywhere to go. From a narrative perspective, most of the characters (Evelyn, Douglas, Norman, Carol, Madge, and Muriel) are just treading water and this film is just stretching out the resolution that each of them already reached in the first, valuing them less because they can be further developed and more because the audience's familiarity and affection for them creates an easy point of entry into the story. They aren't relegated to the status of secondary characters, but they're used more to add color to the story than to explore anything new, while the new ground the story treads comes courtesy of the stories involving Sonny and Sunaina, and Sonny's mother and Guy. This isn't a knock on the film, per se, as it gets away with this in an admirably effortless way, but the fact that it spends a significant amount of time reanimating the already finished stories from the first and coasting on the charm of its cast can't really be avoided.

None of that dampened my enjoyment of the film, though, as seeing these great actors just doing their thing is a pleasure in and of itself. With any other actors, the Evelyn/Douglas relationship could end up feeling unsalvageably inert, but between them Dench and Nighy create a relationship of great emotional complexity and depth which ends up providing the film with a core of sweetness that serves it well. The anchor of the film, however, is Smith, whose ornery character gets the best lines but, because she's played with such masterful craft, is never reduced to some kind of "sassy granny" stereotype. When the film reaches the point of its happy endings, wrapping up its stories with the pairing off of various characters, it steps aside and allows Muriel/Smith the final word, mixing a touch of bittersweetness into the finale which feels more poignant than it should on paper. The Second Best Exotic Marigold Hotel isn't brilliant cinema, but it's not trying to be, either. It has modest goals and ultimately exceeds them. It might be the second best, but it's not bad at all.
Posted by Norma Desmond at 8:00 AM