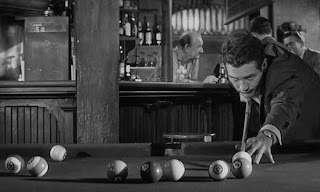 Though he bristles when another character calls him a "loser," Eddie (or "Fast Eddie") Felson seems allergic to victory. The only reason he ever seems to be winning is so that he can find a way to lose, pushing and pushing and pushing his luck until it finally runs out and all the gains he's made have disappeared. Paul Newman was already a star by the time he starred in The Hustler, but Eddie Felson is, in many ways, the quintessential Paul Newman role - roguish, troubled, slightly hardened, and overall irresistible; no wonder he played it twice (winning an Oscar for the sequel, The Color of Money, 25 years later). Now 54 years old, The Hustler isn't one of those ageless films that still feels as fresh and revolutionary as it did on its first release, but it is nevertheless one that has aged well enough that it still feels dynamic and alive.

When we first meet him, Fast Eddie and his partner, Charlie (Myron McCormick), are posing as salesmen just passing through town and looking to play some pool to pass the time before moving on. The game is that the stakes between Eddie and Charlie continue to climb higher and higher while Eddie starts looking more and more drunk, until finally Eddie makes a bet so outrageous that Charlie walks away in disgust, making room for one of the onlookers to step in to play for what he assumes will be easy money. Instead, Eddie makes the seemingly impossible shot and he and Charlie move on to the next place and the next group of potential suckers. But, while Charlie may be content to carry on with these small potatoes games, for Eddie it's all just a pretense. What he's really doing travelling cross-country with Charlie is trying to track down Minnesota Fats (Jackie Gleason), a legendary pool player that Eddie is determined to play and beat. When he finally does come face-to-face with the player - a debonair man treated like royalty by those around him - he actually does manage to get the best of him... for a while. However, instead of collecting his winnings and walking away, as Charlie urges and then begs him to do, Eddie insists on continuing to play until Fats tells him he's had enough. What ensues is 25 hour marathon of play which results in an exhausted and now drunken Eddie losing it all. Afterwards, having grown weary of running around the country hustling, Eddie ducks out on Charlie to try to make his own way.

Out on his own, Eddie meets Sarah (Piper Laurie), an alcoholic who implies that she's the kept woman of a wealthy man, and falls into a relationship with her. Eddie quickly moves in with her and after he's roughed up and his thumbs are broken by some disgruntled pool players, Sarah nurses him back to health and starts trying to give up the drinking, having fallen in love with him and not wanting the relationship to be merely transitory, as all the others have been. As soon as his casts are off, however, Eddie is drawn back into the hustle by Bert (George C. Scott), a professional gambler who wishes to stake Eddie for the price of 75% of whatever winnings Eddie is able to bring in. Eddie doesn't care for Bert, who was present during the marathon game with Fats and dismissed Eddie as a "loser," but part of him is still itching to get back in the game and prove once and for all that he's the best there ever was. In accepting Bert's deal, however, he sets himself up to forfeit everything even remotely good in his life.

The surprising thing about The Hustler, which was adapted from the novel of the same name by Walter Tevis, is how little of it (relatively speaking) is spent watching its protagonist play pool. In most films, the romantic plot would be secondary, a thing included to add to the stakes something personal and easy for the audience to engage with, but in this film it actually feels like the primary story. A lot of the crucial character work gets done in the scenes between Newman and Laurie and the film takes time to fully develop and express the dynamics of the relationship between these two people, both of whom are so sad and struggling with addiction. They are suited to each other in many ways, and in certain respects are even good for each other, but Eddie's addiction to losing means that it will never last and that Sarah is doomed to be destroyed in the process. There's a long stretch of the film where the story seems to be as much Sarah's as it is Eddie's, and the film never treats her like a prop that can be used to explore some other side of Eddie, but rather allows her to fully be a character in her own right and commits itself to deepening our understanding of her character even after it starts to move back into the milieu of pool halls. As written by Sidney Carroll and director Robert Rossen, The Hustler is a film which makes great efforts to do right by all of its characters, rather than simply using the supporting cast to add shading to the characterization of the protagonist.

Those efforts to provide real characters for all of the actors to sink their teeth into would result in the film garnering four acting nominations: Newman getting his second Best Actor nod, Laurie being nominated as Best Actress, and Gleason and Scott both receiving Best Supporting Actor nominations (though Scott technically refused his nomination, as was his wont). All of them deliver fantastic performances, with Gleason's being one of those portrayals which feels like it has more screen time than it actually does because his bearing makes the character loom so large in the imaginations of both the other characters and the audience itself. Shot with a minimum of flash by Rossen, The Hustler can truly be said to be an actors' showcase, allowing the performances so much room to grow from scene to scene (and within each scene) that by the end the film seems to have taken on a great psychological weight in a way that seems effortless. The Hustler is a film well worth catching up with if you haven't seen it before, and well worth revisiting if you haven't seen it in some time.
Posted by Norma Desmond at 8:00 AM