21st Century Essentials: The Saddest Music in the World (2003) 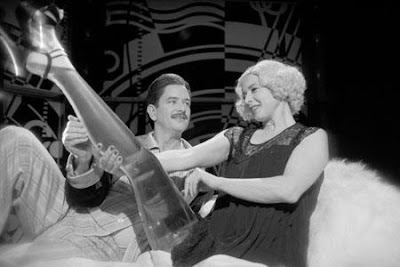 Like a lot of great movies, Guy Maddin’s The Saddest Music in the World defies simple classification. Designed to look like a lost classic rediscovered and restored, but marked by a distinctly post-modern sensibility, The Saddest Music deftly merges comedy and drama, beauty and absurdity, creating a film that can be as unwieldy as it is graceful, as ugly as it is magnificent. Above all, this startlingly original film is a surrealist masterpiece.

The film begins with an evocation of Golden Age Hollywood (with a touch of the silent era mixed in as well) and centers on the Kents – brothers Chester (Mark McKinney) and Roderick (Ross McMillan) and their father, Fyodor (David Fox) – a family marked by tragedy. The family’s matriarch died when Chester and Roderick were young children. Roderick has since lost his son as well as his wife, who disappeared after the boy’s death. Chester and Fyodor, meanwhile, were once engaged in a battle for the affections of Lady Helen Port-Huntley (Isabella Rossellini), which ended with her losing both her legs in an accident. Although Roderick and Chester have both long since fled their hometown of Winnipeg – Chester going south and becoming a Broadway producer, Roderick fleeing to Eastern Europe and transforming himself into Gravillo the Great – they are brought back by Lady Port-Huntley and the contest she holds to find the nation with the “saddest music in the world.”

The real motivation for the contest is crassly commercial (Lady Port-Huntley wants first of all to promote her beer, and second of all to make people so depressed listening to sad songs that all they want to do is drink) and the film itself is preoccupied with the construction of emotion and contexts in which emotion are presented, and the subsequent commodification of emotion for use as a product for the masses. While Fyodor gives him a bit of a run for his money, having figured out how to present the emotion of his performance in such a way as to engender the most intense reaction from the audience and thereby keep him in the competition, Chester is the film’s master manipulator, quickly recognizing the marketable potential of real emotion and manipulating it as necessary. By the end of the competition, Chester has risen to the top not by performing himself, but by creating a show around “sadness” and by incorporating into his team those performers who have already been eliminated from the competition. The sadness here is merely smoke and mirrors, a product of Chester’s showmanship and a parody of real emotion.

Like all of Maddin’s films, The Saddest Music is a visually arresting film full of beautiful images. For the competition’s grand finale, Lady Port-Huntley participates in Chester’s big show, modeling the new set of legs that Fyodor has made for her, made of glass and filled with beer – in the end, she not only commodifies the pain of the past, but also her physical body. It’s a moment firmly situated between the ridiculous and the transcendent, with Rosellini finding just the right notes of pathos and madness, and the film demonstrating its ability to utterly mesmerize on both a visual and narrative level. The Saddest Music in the World is, without question, an oddity but it’s a film that everyone should experience at least once.
Posted by Norma Desmond at 8:00 AM