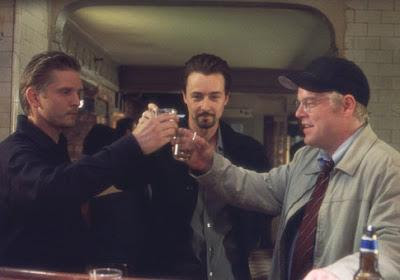 For 24 hours Monty Brogan (Edward Norton) will walk around his city, spend time with his friends, with his father, and with the woman he loves, have one last party, and settle an outstanding score. On the 25th hour, he'll turn himself over to begin a seven year sentence for drug dealing. Spike Lee's "day in the life" film, based on the novel of the same name, is a great character drama, but it's also a beautifully elegiac ode to a city which, at the time of the film's production, was still freshly scarred. Eleven years on, 25th Hour remains a vital and moving film, and one of Lee's absolute best.

After a brief prologue in which Monty finds and rescues a dog, the film flashes forward to its present day - the "last" day, in many ways, of Monty's life. He has a lot on his mind, naturally, though he doesn't much want to talk about it, much to the dismay of his girlfriend, Naturelle (Rosario Dawson). Secretly, he harbors doubts about Naturelle's loyalty, as she was only one of two people other than himself who knew where he hid his drugs and drug money, which DEA agents found with ease when they finally showed up at his door. The other person was Kostya (Tony Siragusa), part of the cartel run by "Uncle Nikolai," who shows up on Monty's doorstep at Nikolai's behest in order to ensure that Monty is planning to come to Nikolai's club later on for a going away party. Monty assures him that he'll be there, rallying Naturelle and his friends, Frank (Barry Pepper), and Jacob (Philip Seymour Hoffman) to join him. Monty's future - or lack thereof - is on everyone's mind and privately Frank and Jacob discuss the future, with Jacob hanging on to an optimistic vision of being there for Monty when he finally gets out, and Frank taking a darker view that Monty will echo later on. Whether or not Monty physically survives his stint in prison, both he and Frank agree that for all intents and purposes, the Monty they know will be dead.

Before going out to Nikolai's club, Monty stops off to visit his father, James (Brian Cox) at his bar and in the process has a moment of clarity where, after mentally railing against every subsection of New York, he quietly accepts responsibility for his fate: "You had it all and you threw it away." As much at peace with what's happened as he'll ever be, Monty meets up with Naturelle, Jacob and Frank, eventually joined by Mary (Anna Paquin), one of Jacob's students at the high school where he teaches. Things get slightly crazy after that, as Monty is summoned to a meeting with Nikolai, and Jacob, who has been nursing a crush on Mary, lowers his inhibitions enough to make a move, leaving both of them stunned at the enormity of what just happened. As the night ends, and Monty's time approaches, all of them end up somewhat shattered, having to put the pieces back together in the cold light of day. For some that's easier than for others; Monty, certainly, will never be the same.

The events of 25th Hour exist in the specter of 9/11, with Frank and Jacob at one point looking down at ground zero from Frank's apartment, but the film isn't directly about the terrorist attacks - which is one of the things that makes it, arguably, the best film about the attacks. The story centers on a definitive break of time into two eras, so just as New York becomes a city split into "before 9/11" and "after 9/11," Monty becomes a man split into "before prison" and "after prison." He's mourning the life he's leaving behind, and he's struggling to find the resolve to go forward into the new world unfolding before him. Lee, who can be a bit of a heavy hand sometimes, brings a soft touch to this aspect, trusting that just a couple of direct references to the attacks will be enough to underscore the theme of transition. His direction here is unobtrusive and steady, slowly building to the film's marvelous and mesmerizing finale, in which James imagines an alternate future for Monty. Lee can be hit and miss as a filmmaker, but here he's right on target from beginning to end.

As for Norton, he's rarely been better than he is here as Monty. Monty is, on the one hand, a very calm character, one who goes through his final day in a methodical fashion, tying up the loose ends he needs to tie up, and trying not to get angry. Though he suspects that Naturelle may have turned evidence against him, he prefers not to confront her about it and instead just spend whatever time they have left together, and later on, when he learns of a betrayal by one of his friends, he opts not to exact revenge, unwilling to be manipulated by a third party. On the other hand, Monty is quietly starting to panic, certain that he won't survive prison and desperate to find anything that might give him an edge going in. His final scene with Hoffman and Pepper is wrenching as he begs for help in destroying the Monty of today in order to make it easier for him to become the Monty of tomorrow. It's a painful transition and, as the film ends, there remains the question of whether or not Monty will survive it. All that's certain is that nothing will be the same again.
Posted by Norma Desmond at 8:00 AM