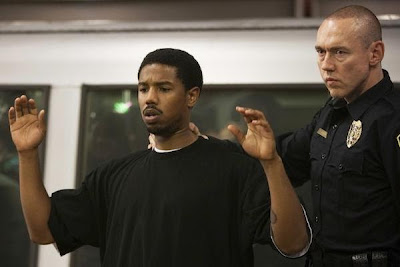 I would imagine that it would be difficult not to feel intensely about the events depicted in Fruitvale Station, both because it is based on a true story and because of more recent events which have made headlines, sparked debate, and incited a great deal of anger. Fruitvale Station does not exist in a vacuum, it exists as part of a greater racial and socioeconomic narrative about power and its abuses, and it can be hard to consider the film on its own terms, divorced from that context. It's an "issue movie" but it is also an effective character drama. In certain respects this "day in the life" film is flawed, but as an emotional experience it is near perfect.

Fruitvale Station takes place over the course of a little more than 24 hours, leading up to the death of Oscar Grant III (Michael B. Jordan) on New Year's Day 2009. On that day he takes his daughter to daycare and his girlfriend, Sophina (Melonie Diaz), to work, and runs errands to prepare for the birthday celebration for his mother (Octavia Spencer). He tries, and fails, to get back the job he lost two weeks earlier, a job which he's been pretending to still have, and considers selling a stash of marijuana in order to cover the month's rent for both himself and his sister after she calls and asks to borrow some money. He ultimately thinks better of it, recalling his last stint in prison when his mother made it clear that he was experiencing his last chance with her, and decides to change the course of his life by sticking to the straight and narrow. He, Sophina, and their daughter later go to his mother's house to celebrate her birthday, afterwards dropping their daughter off with Sophina's sister so that they can meet up with some friends to watch the New Year's fireworks.

As presented by the film, the decision for Oscar and Sophina to go into the city via rail transit is one which will ultimately haunt everyone. It's Oscar's mother's idea for them to take the train, as she reasons that it will be both safer and more convenient than for Oscar to drive. Later, after Oscar suggests that they skip the festivities all together, Sophina insists on them going because she wants a night out. That Oscar will be on death's door at the end of the night - shot in the back by a BART officer while lying face down on the train platform - has already been acknowledged as a fact by the film's opening minutes, but the film also steadily nurtures a sense of it being something preordained, with Oscar being set back on the path to that train time and again. To the film's credit, despite this overarching feeling of horrible inevitability, it never treats Oscar as a symbol. There is humanity in Jordan's portrayal of Oscar and in the film's treatment of the character and those who surround him, and that's why the film strikes such a deep chord. This is a human story - horrible, heartbreaking, but human.

An argument can be made that Fruitvale Station stacks the deck to ensure that the audience cannot escape the full force of the tragedy that it is depicting: it begins with cell phone footage of the actual shooting, making the event sickeningly, inescapably real, and then spends its running time showing Oscar as someone well-loved by those around him, capable of small, random acts of kindness, and as being on the verge of getting his life together. In this one day he's shown contemplating proposing to Sophina, helping a woman in line at the grocery store, comforting a dying dog, toying with the idea of entering back into the drug trade and then changing his mind and dumping out his stash, spending time with his family, and then going out with Sophina and their friends (where, again, he helps a stranger by talking a restaurant owner into letting a pregnant woman in to use his restroom). It's a big day, and the fact that the woman from the grocery store ends up on the train with Oscar, as well as a man from Oscar's past who shows up in the flashback to his time in prison, drifts just a touch offside, foregoing credibility in an effort to construct a deeper level of emotional resonance to the scene (although it does create a great moment of comedy when the woman calls Oscar's name and Sophina pops out of her seat like a prairie dog to try to get a look at her). I'm not sure that the film absolutely needs this (or, for that matter, the interlude with the dog) in order to make its point, however, writer/director Ryan Coogler is skilled enough that even though these things feel a little manipulative, they don't feel as manipulative as they might have. It helps that the film doesn't try to paint Oscar as a spotless innocent and instead depicts him as a complex and complicated person. He loves Sophina, but as the film opens he admits to having cheated on her. He loves his mother, but in the prison flashback he says some awful things to her. He's trying to get his life together, but he has a temper that flares easily, whether confronted by someone who wishes to do him harm, or trying to convince his boss to give him back his job. He isn't perfect, but of course that doesn't matter. He could have been the worst person in the world and what happened to him still shouldn't have happened.

Although Coogler, making his feature film debut, proves to be an adept hand at guiding the story, Fruitvale Station finds its greatest strength in its performances. Jordan is wonderful as Oscar, turning in a nuanced, charismatic and probably star making performance, and Spencer is magnificent with a small but powerful performance as Oscar's mother. While most of the film belongs to Jordan, the finale, which depicts what happens after the shooting, belongs wholly to Spencer. Her character's grief, though telegraphed in that moment when she encourages Oscar to take the train instead of driving, is moving and raw. Fruitvale Station is a powerful film, one which manages not only to tap into the tone and furor of the day, but to create a compelling story all its own.
Posted by Norma Desmond at 8:00 AM