Hollywood Book Club: The Prince, the Showgirl and Me 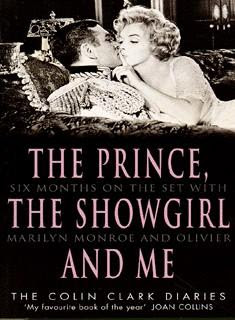 Colin Clark's account of his time spent on the set of The Prince and the Showgirl is probably best known as one of the two books on which the Michelle Williams starring (and Oscar nominated) My Week with Marilyn is based. It's a set diary kept by Clark as he worked on the film, detailing some of the minor adventures of filmmaking and the minor and major dramas that play out during the course of getting a production off the ground. Interestingly, what isn't covered in the diary is what's covered in the other book that inspired the film, Clark's "My Week with Marilyn," written 40 years after the fact and detailing nine days during which he conveniently didn't keep a diary and allegedly had a (platonic) romance with Marilyn Monroe - because, if you were a 24 year old, heterosexual guy in 1956 who got to have any kind of intimacy with Marilyn Monroe, of course you'd wait 40 years to tell anyone about it.

Although I think the second book is more wish fulfillment than anything, the first book is a hugely entertaining read told from the perspective of a young man who thinks he's a lot more worldly and wise than he actually is. One of the many charms of "The Prince, the Showgirl and Me" is Clark's willingness to put an unvarnished picture of his 24 year old self out there for all to see. For most of us, if we had a diary that we kept at 24, we'd probably edit out some things before publishing it because our older selves will almost always be embarrassed by our younger selves, but Clark is seemingly unafraid to show himself as having been a little bit pompous and fairly judgmental of those around him. In one journal entry he refers to Monroe as "a lovely child" and speculates as to how such a naif ended up in the film business in the first place, and he often writes about her as if he's determined to rise above the reaction she would usually engender. He sometimes goes out of his way to state how unattracted he is to her (which makes his follow-up book so interesting), noting her many physical and personality flaws, and generally looking cattily down on her from on high: "Vivien [Leigh], who knows I worship her, asked me confidentially how MM was working out. I dare not say anything or she might quote me, so I just rolled my eyes to heaven."

Monroe, of course, was a notoriously difficult presence on every set she ever set foot on, the luminescent perfection of her image on screen seemingly in direct proportion to how mentally taxing it was for her, and everyone around her, to complete a scene, and The Prince and the Showgirl was no different. Although his narrative voice can take on an unearned degree of self-satisfaction, Clark can also be quite insightful about Monroe and her co-star (also the film's director) Laurence Olivier as people trying to negotiate their images. He surmises that Olivier was drawn to the project as a means of boosting his own sex appeal, and maybe recapturing his fading youth, by attaching himself to Monroe, and that Monroe came to the picture in an effort to be taken seriously as an actor by working with someone as renowned as Olivier. From his position in the trenches, Clark watches as those seemingly complementary desires cause no end of problems, as the disciplined Olivier is driven half-mad not only by Monroe's unprofessional behavior, but also by her method approach and her need to have Paula Strasberg on set, which results in Strasberg effectively acting as a wall between Olivier and Monroe which Olivier as director can never breach.

"The Prince, the Showgirl and Me" is a fascinating read, both because it gets into a lot of the nitty gritty of movie making, but also because of the unselfconscious way that it undercuts notions about 1950's conservative mores. During the course of the journal, Clark spends a fair amount of time pursuing a woman condescendingly referred to as "little Wardrobe Girl," who he eventually decides is too stupid for him to date, while also nursing a crush on Susan Strasberg, and out of nowhere having a same sex encounter that sends him straight into the arms of an ex-girlfriend because he "just had to have normal sex again. I've grown out of all that school boy stuff at last. Perhaps I'll go back to it when I'm old, but for now I prefer girls" (none of this made it into the film, of course). This is all beside the main narrative purpose of the book, but it's interesting nevertheless for the way it helps contextualize the era.

"The Prince, the Showgirl and Me" is an easy, enjoyable read, certainly one of the better "making of" books I've ever read. I can't say the same about the follow up book, but this one is worth the read.

Next Month: Rebels on the Backlot
Posted by Norma Desmond at 8:00 AM