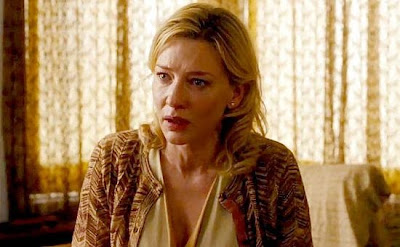 A Streetcar Named Desire by way of the Bernie Madoff scandal by way of Woody Allen. The story beats are familiar, but nothing can take away from the bravura performance by Cate Blanchett at the film's centre. As a woman already beyond the verge of a mental breakdown, she delivers a fascinating, sometimes terrifying, performance that can easily be considered one of the best Allen has ever captured, and a formidable contender for this year's Best Actress statue. The film around her isn't quite as strong as it could be, but Blanchett's performance is so mesmerizing that it very nearly makes up for the unevenness of the other elements.

Disgraced by the financial machinations of her husband, Hal (Alec Baldwin), and her related fall from the heights of high society, we meet Jasmine Francis (Blanchett) en route from New York to San Francisco as she relates the story of her life to the woman unfortunate enough to be sitting next to her on the plane. As Jasmine goes on - and on and on - the other woman begins to look increasingly uncomfortable, later revealing that she only entered into conversation (if something so one-sided can be called as much) with Jasmine because she thought Jasmine was talking to her when in fact Jasmine was babbling away to herself. It's something Jasmine does frequently, transitioning her inner monologue to an outer monologue, often mid-sentence, and it's just one of the many signs that Jasmine is not well, not that those closest to her seem to notice just how badly she's faring. Jasmine has come to San Francisco to live with her sister, Ginger (Sally Hawkins), for an indefinite period, something which proves highly inconvenient to Ginger's boyfriend, Chili (Bobby Canavale), and downright baffling to Ginger's ex-husband, Augie (Andrew Dice Clay).

Back in the day, Augie and Ginger came into money and planned to use it to start their own business until Jasmine and Hal talked them into investing it in one of Hal's many mysterious (to Jasmine, at least - or so she claims) business ventures. Hal lost it all, ruining Augie and Ginger's shot at making a better life for themselves. As far as Jasmine is concerned, this is all in the past (she's gotten over it, after all) and they should move on and forget about it, which also means forgetting about how little use Jasmine had for Ginger during the days when she had everything. Ginger doesn't hold grudges, though, and quickly falls under Jasmine's sway, taking her sister's assessment of Chili to heart and beginning to look elsewhere and having her heart briefly stolen by Al (Louis C.K.), a man who turns out to be too good to be true. As Ginger's love life falls apart, Jasmine's fragile mental health continues to crumble away to the point where even the thin veneer of normalcy she's desperate to maintain is completely stripped away, leaving her a shell of what she once was.

Blue Jasmine's strength lies almost entirely in its title character, who is not just excellently played, but well-drawn by the screenplay. This is a woman who has never been anything but an image, an idea that she herself created and managed to maintain for many years and which, when taken away from her, leaves her completely bereft and directionless. She has crafted a persona for herself that allows her to fit in with high society and which is strongly rooted in her relationship with Hal and the image of the ideal that she wants to project: they're in love, he's successful, she throws the best dinner parties in Manhattan, they are the envy of everyone. But this is all built on a foundation of lies. Jasmine isn't her real name, just one she's chosen for herself because it sounds more exotic than Jeannette and because it allows her to tell that perfectly rehearsed story of how when she and Hal met the song "Blue Moon" was playing. Both her marriage and her wealth are little more than smoke and mirrors - Hal has multiple affairs through the years, while Jasmine takes pains to maintain face, and Hal's financial shenanigans become more and more glaring, while Jasmine goes out of her way not to know where their money is coming from. Now that all of that is gone, the idea of Jasmine Francis is not longer sustainable and without the marriage and the money, all she has to rely on is her character, but she has none. She makes an attempt in San Francisco to reinvent herself again but she's too far gone (and she's done too many things to too many people) to close the deal. Although Jasmine is an often unlikeable character, a deeply negative person with an entrenched victim mentality that is at odds with reality, she's also a fascinating one and increasingly so as she becomes more and more unhinged.

But while Jasmine is a near perfectly realized character, there are problems with the others. Although all the supporting actors fare well in their roles, there's ultimately something lacking in the characters which I think speaks to a fundamental problem with Allen as a filmmaker. Although he excels at depicting people like Jasmine - educated, articulate, neurotic, and upper class - he has difficulty with blue collar characters, whose language he simply doesn't speak. Chili, Ginger and Augie are characters largely without complexity, driven by base emotions like anger and lust. The actors are able to give the characters some shading (Clay, in particular, is a pleasant surprise in this regard), but there isn't really much to them. The greatest victim in this regard is Chili, who is relegated to comic relief/buffoon status, which in turn robs Canavale's performance of the quivering, dangerous intensity that made Marlon Brando's depiction of Stanley Kowalski so compelling. Without that, as it turns out, the Kowalski figure is just kind of a doofus, making the conflict between him and Blanche/Jasmine a nonstarter.

Although Allen doesn't adhere too strictly to the Streetcar structure, Tennessee Williams' story echoes throughout, particularly in the film's grim finale. This sense of homage is part of what makes Blue Jasmine seem like a bit of an oddity in Allen's filmmography, couple with the fact that the film sometimes seems a bit undecided about whether it's a drama or a comedy. However, despite its small flaws, this is ultimately "good Allen."
Posted by Norma Desmond at 8:00 AM