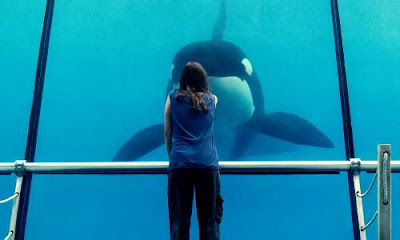 A broad description of Rust and Bone’s plot would make it sound like an over-written melodrama that throws as much at the wall as possible: an unemployed single father who gets involved in underground fighting to support himself, and a trainer at a marine park who loses her legs in an accident, develop a relationship that is part friendship, part sex, and part business. A lesser film would be sunk under the weight of that kind of plotting, but Jacques Audiard’s follow-up to his Oscar nominated A Prophet is so nuanced and sensitively wrought that it makes all of it work, creating a film that is intelligent and moving.

The film opens by focusing on Ali (Matthias Schoenaerts), who is traveling with his young son, Sam (Armand Verdure), to Antibes to look for work and crash with Ali’s sister, Anna (Corinne Masiero). These early scenes foreground the family’s struggle for survival as they try desperately to remain on the right side of the line between poverty and complete oblivion, with Ali scouring the train they’re traveling on for discarded but still edible food for Sam and then later resorting to outright theft, and Anna’s fridge stocked with food past the “best by” date that she’s taken from the grocery store where she works. With Anna’s help, Ali gets a job doing security which quickly brings him into contact with Stephanie (Marion Cotillard) when she’s injured during a fight at the club where Ali is bouncing. Ali offers to drive her home, casually informing her that the fight probably wouldn’t have happened if she hadn’t been dressed “like a whore,” and just as casually intimidating her live-in boyfriend. The emasculated way that the boyfriend reacts to Ali gives Stephanie the courage to stand up to him, seizing a level of agency over her life and her body that will just as quickly (but temporarily) be snatched back from her.

Stephanie is a whale trainer at a marine park and soon after her brief encounter with Ali an accident happens during a show which results in both of her legs being amputated. Confined to a wheelchair and depressed, she reaches out to Ali and the two develop a friendship that flourishes largely because Ali has the ability to acknowledge her disability without playing into the notion that it means that she’s restricted from participating in all aspects of life – she has to do things differently, but that doesn’t mean that she can’t do them at all. The two begin frequenting a local beach to go swimming and Stephanie begins coming along to watch the fights that Ali has been taking part in to supplement his income. Eventually the two begin a casual sexual relationship, which Ali treats a little too casually for Stephanie’s liking. The simple way with which he views the world, adopting a sort of “take things as they come” attitude, is what draws her to him but his seeming inability to engage with the complexities of life and relationships will eventually drive them apart, as well as driving Ali away from the other people in his life.

The story of Rust and Bone unfolds in an easy, naturalistic way, with each plot development flowing nicely into the next. Audiard sets a careful pace to the proceedings which allows the characters and their relationships with each other to develop slowly as the story progresses, and allows the film to dig deep without sacrificing subtlety. As played by Schoenaerts, Ali is a character who often seems more animal than man, a creature of blunt, sometimes brutal instincts, capable of unthinkingly inflicting great harm, but also capable of relating to others in a way that is devoid of judgment. Audiard does an excellent job at recognizing Ali’s animalistic tendencies without overplaying them, and Schoenaerts delivers a performance that helps make Ali more than just a symbol and brings shading to the character that makes his third act arc more believable and easier to invest in.

The heart of the film, however, rests with Cotillard and her character, and with Audiard’s portrayal of her as a fully realized human being. So often in pop culture people with disabilities are depicted as saintly and de-sexualized, and Rust and Bone’s very sensitive exploration of how the loss of her legs affects her psychologically and how she rediscovers herself as a sexual being is not just commendable, but very well-done. In that context there’s nothing gratuitous about the level of nudity and sex in the film, which finds a nice balance between eroticising the central relationship and naturalizing it. Cotillard brings a lot of vulnerability to the role and delivers one of her strongest performances to date, one that would not have been the least bit out of place had it been included as one of this year’s Best Actress nominees.

Rust and Bone is an extremely well-crafted piece of work that serves as a showcase for two great performances. It’s a raw, intelligent, and dynamic film, the kind that comes around all too rarely.
Posted by Norma Desmond at 8:00 AM