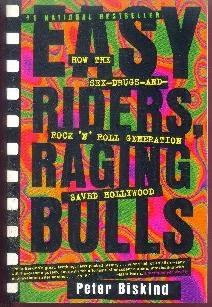 Peter Biskind’s Easy Riders, Raging Bulls: How the Sex-Drugs-and-Rock ‘n’ Roll Generation Saved Hollywood is where the serious study of cinema and the less serious (but no less fun) gossipy memoir meet. Focusing on the brief period of time from the end of the 1960s through the mid-1970s when Hollywood was unlike anything it had been before or anything it has been since – a haven for intelligent, artistically driven pictures – Biskind examines the impact of the men and women (mostly men) whose passion for film breathed new life into the industry, while peppering his narrative with tidbits of gossip (this is usually where the women come in) that help make it so compulsively readable.

First and foremost, Biskind does an excellent job at putting the American auteur era into context. Artistic movements never happen in a vacuum and this one is no different, emerging as an assertion of identity by one generation determined to wrest control of the zeitgeist from the previous generation. Rejecting the rigidly controlled, and obsessively profit based business model that defined the studio system, the new way of doing things emphasized letting the artist have an unprecedented level of control over the product. Where before directors were often just employees matched up with projects, now they were encouraged to develop their own projects, bringing levels of passion to their work that was not necessarily always present before. From a creative standpoint, it was a great system – at least for a while.

Like all great and idealistic ideologies, that which drove this movement would eventually begin to corrupt and decay. Drugs and sexual excess played a sizeable role in undercutting the goals of the auteur movement, as key figures like Bert Schneider, the producer of such seminal films as Easy Rider, The Last Picture Show, Five Easy Pieces and Days of Heaven, would become burned out by the lifestyle, and directors like Francis Ford Coppola would go mad with power and start making the money people question the wisdom of giving the creative people such free reign. Biskind takes care to chart the various stages of the movement’s rise and decline, making it all seem inevitable, as the freedom for artists to create great works also created an environment that allowed for a sometimes disastrous level of self-indulgence and lack of structure. It was a system that ultimately could not be sustained because, while the ideal began with good films made with small budgets, the budgets steadily grew and the willingness of the artists to be reigned in began to wane. It was too big to fail but, when it did, it did so spectacularly that the studios were able to come roaring back, dominating the output of the last three decades and pushing smaller, more artistic endeavors off to the sidelines.

On the one hand, the end of the auteur era is a loss to moviegoers and a cultural tragedy, as some of the best films ever made were made during this era. On the other hand, considered in conjunction with the personal details about the filmmakers that are furnished by Biskind, it becomes at least a little bit difficult to feel sorry for the artists who had, and then lost, all that power. The men depicted in the book come off as almost uniformly detestable human beings – Dennis Hopper is psychotic, Robert Altman is an asshole, Peter Bogdanovich is a whiz kid so precocious and pretentious that you can’t wait to see him taken down a peg, and Coppola, for all his genius as a filmmaker, is a megalomaniac of such gigantic proportions that you start to root against him on general principle – and behave like little boys let loose in a candy shop. Not that women, when they come up in the conversation, come off much better but, then again, they usually only come up in terms of which of the powerful men they happen to be sleeping with at any given time. Although Biskind takes a “warts and all” approach to dealing with the men in the story, there remains a palpable sense of admiration for them due to the work they produced, and despite the often awful (and sometimes violent) way that they treated the women in their lives, the book has a definite “bros before hos” attitude.

Next Month: You’ll Never Eat Lunch In This Town Again
Posted by Norma Desmond at 8:00 AM

I love this ear of cinema. It sounds like, despite its flaws, it is still a pretty good read.

Oh, definitely a good read. I couldn't put it down once I started.