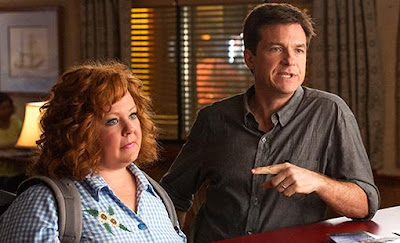 When in doubt, just throw in a throat punch. At least I assume that that was the strategy behind Identity Thief, an occasionally funny film that has the curious misfortune of being both over and underplotted. This is not a good film, nor is it a particularly good use of the talents of either Melissa McCarthy or Jason Bateman. What it is, is the very definition of a first quarter movie, the sort of thin, diversionary effort that will be forgotten before the next season even begins.

Bateman stars as Sandy Bigelow Patterson, a Denver accountant and family man whose life and finances are hijacked when his identity is stolen by a Florida-based con artist (McCarthy) who has not only run up high debts in his name, but has also managed to get a warrant issued in it as well. Having just quit his job in order to get in on a new venture, and expecting a third child with his wife, the timing couldn’t be worse for Sandy and in an effort to save his reputation, his credit rating, his job, and his freedom, he goes to Florida, determined to find the identity thief and bring her back to Denver in order to clear his name. Finding her proves easy (well, relatively, compared to everything that happens afterwards), but getting her to Denver proves nearly impossible.

The other Sandy, also known as Diana, is also being sought after by a pair of gangsters (Genesis Rodriguez and T.I.) and a skiptracer (Robert Patrick), which means that even though Sandy is able to talk Diana into going to Denver, it isn’t long before they’re on the run, rather than just on a road trip. They take a number of detours, get involved in a surprising amount of car accidents, and manage to find a “justifiable” victim for identity theft in the form of Sandy’s former boss, a greedy Wall Street type who follows the philosophy of Ayn Rand (it probably says a lot about me that the thing I found most irritating about this movie is that it uses The Fountainhead for a throwaway joke when Atlas Shrugged would have been the better example given the context). Of course, this causes a whole new wave of problems and throws what could possibly be the definitive wrench into Sandy’s plans to get his life back to normal.

McCarthy and Bateman are both game performers (though it must be said that Bateman’s schtick is starting to get just a little bit old) and do what has to be done to meet the absurd demands of the story. The problem with the film is that it never really seems to know what it wants to be, and this is a problem which stems both from the shapeless screenplay – the subplots involving the gangsters and skiptracer are both so slight that they seem like remnants of an early draft that the filmmakers couldn’t find a way to excise completely from the story – and the weak direction of Seth Gordon, which can neither halt the runaway train of a story, nor create a consistent tone for the piece. The film gets oddly and unbelievably unsentimental as it nears the end and that is a severe miscalculation. If more effort had been made to develop Sandy and Diana as characters, it might have worked, but even then it would have felt like a bit of a cop out. Diana is a sociopath and if you’re going to tell a story about a sociopath, you’d do well to follow the example of a film like Young Adult and go all the way with it, even if it means going to the darkest of places and making the character unapologetically irredeemable, rather than try to manufacture a third act softening of the character.

Like I said, both Bateman and McCarthy are game, leading the film from one set of situations to another (because that’s all the story amounts to, really; a series of sequences connected by little more than the repetition of gags, namely McCarthy punching people in the throat, car crashes, fat jokes and gay jokes, both of which are lazy and unimaginative here, even by the low standards of fat jokes and gay jokes) and giving it their all. This isn’t going to be a highlight in either of their careers, but they equip themselves well enough given the material they have to work with, and their chemistry is solid enough that I find myself hoping that one day they reteam for a movie that’s actually worth it.

Hmm, can’t think of how to end this review... I know! *throat punch*

lol. guess this is a rental, maybe.

I'd actually wait until it shows up on TV.