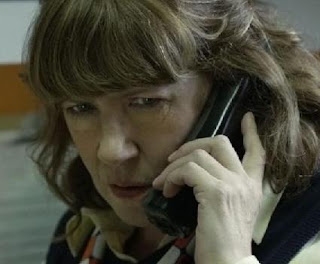 Craig Zobel’s Compliance is one of those curious films that is nearly unbearable to watch precisely because it is so well-made and effective. Based on true events, the film cuts so close to the bone because it explores one of the darkest aspects of society, namely, our often unquestioning acquiescence to authority. You watch this film wanting to believe that something like this could never really happen while knowing that, in fact, it could happen quite easily. Compliance leaves you with a sick feeling, and I can understand why its premiere at last year’s Sundance festival resulted in walkouts and anger among the audience; but, at the same time, inducing that sick feeling is exactly the point. If Compliance didn’t make you feel sick, it would just be another run of the mill exploitation movie.

Compliance is set over the course of an increasingly bad day at a Chickwich, a fast food restaurant. The day begins with the store’s manager, Sandra (Ann Dowd), learning that the freezer was left open, spoiling much of the store’s stock, and on a day when a quality control rep is meant to show up in the guise of a regular customer to check out how things are running at that particular store. With tensions already high, a phone call is received from a man purporting to be a police officer. He informs Sandra that one of her employees has stolen money from a customer’s purse, and then manipulates her into giving up the name of one of the employees – Becky (Dreama Walker) – while making her think that he had the name all along. He goes on to explain that he needs her to detain Becky at the restaurant until he’s able to get there, and that he’ll need her help in securing the evidence.

Becky denies having stolen any money while Sandra is instructed by the police officer to search Becky’s purse and her locker. When the money isn’t turned up, Sandra is then instructed to conduct a strip search of Becky, a demand which takes her aback but which she’s ultimately talked around to by the alleged police officer. That being done – facilitated by the officer talking Sandra through explaining to Becky that she can either have the search done by Sandra at the restaurant, or by the police at the police station – the officer then tells Sandra that she’ll have to keep Becky’s clothes as “evidence.” Becky, now naked save for the apron provided to her by the assistant manager, is then forced to spend the rest of the day in the back room being “guarded” by various people, first Sandra and then one of the male employees and then Sandra’s fiancée, Van (Bill Camp). Things steadily escalate once Van becomes involved, as the caller manipulates the situation to a level that can only be described as horrifying, until someone with the good sense to start asking questions finally comes along to bring the situation to a close.

The film has a stark, simple brutality that is supported by the strong performances of its cast, particularly Walker and Dowd. In the absence of the ultimate villain, Dowd’s character becomes his agent, acting out his “authority” and becoming increasingly comfortable doing so. She doesn’t just bow to authority; she comes to revel, in some small way, in exercising it. One of the film’s greatest assets is that while the story sounds unbelievable, it never seems false or contrived because Dowd is able to sell us on the notion that Sandra would put her trust in the person on the other end of the phone and follow his instructions exactly.

Zobel reveals fairly early on that the “police officer” is actually just some guy making a prank call, alternately amazed and turned on by what he’s able to make the people on the other end of the phone call do. The film loses nothing by making this revelation early; indeed, the way that Zobel uses the audience’s knowledge of the caller’s identity only increases the narrative tension as it becomes progressively clear that the caller is going to push the situation to the absolute limit, pushing it as far as it will go. The early revelation about the caller is also, I think, partially responsible for the strong reactions which greeted the film’s premiere last year. Audiences connect with films by finding something to identify with onscreen. No one wants to identify with someone that they believe is acting “stupid” which is, arguably, how many of the characters in this film behave (albeit in an uncomfortably believable way); you seek to identify with whomever is acting “smart.” If you identify with a smart character who is also an utterly reprehensible human being, then you yourself become complicit in the terrible things that they’re doing and those terrible things might start to seem entertaining. In this scenario, your sense of disgust has less to do with the film itself than with your own reaction to it.

There’s really nothing “entertaining” about Compliance and contrary to accusations leveled against it, it doesn’t glamorize violence against women. It’s a film about exploitation, not an exploitation film, a fact which I think is made clear by the way that Zobel pointedly refuses to engage in “titillation.” Though Walker spends much of the film’s running time in a state of undress, Zobel frames her within shots so that what we see is the reaction of the other characters to her nudity, rather than the nudity itself. Additionally, the most upsetting moment in the film is suggested rather than explicitly shown. Zobel goes out of his way to de-eroticize the situation, leaving nothing but a sense of disgust that is only reinforced by the film’s final revelation that not only was it inspired by a real incident, but that 70 similar incidents have occurred across the United States. It’s the ultimate “feel bad” movie, which makes it hard to watch, but that doesn’t mean that it isn’t worth seeing.
Posted by Norma Desmond at 3:06 PM