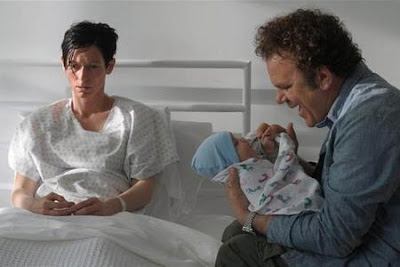 The obvious question that arises from We Need To Talk About Kevin is "why," though it doesn't get asked until the end and the answer remains vague. The film, which charts the lead up to and aftermath of a school massacre, offers no simple answers or comforting solutions. It's a harsh film in many ways, one in which none of the characters comes out looking particularly good, but it's also a thought-provoking and masterfully acted film that ought to be seen.

Based on the novel by Lionel Shriver, We Need To Talk About Kevin unfolds from the perspective of Eva Katchadourian (Tilda Swinton), the mother of a teenage boy who killed several of his classmates. The boy is the eponymous Kevin (played as a teen by Ezra Miller), who proves to be a bundle of hostility pretty much from birth. As he grows he begins to align himself with his father, Franklin (John C. Reilly), less out of genuine affection and more as a means of punishing Eva, who wants to make peace with him but becomes increasingly disturbed by his behaviour - behaviour to which everyone else seems blind.

The story is told largely in flashbacks with the "present day" scenes finding Eva trying to put her life back together while the people around her use her as an outlet for the anger and fear inspired by Kevin's actions. Once she was a successful travel writer who lived in a luxurious house and had a family that at least looked happy from the outside. Now she's a pariah, working at a small travel agency, living alone in a run down house that has become a target for vandalism. She struggles to understand why Kevin did what he did and feels guilty about the lack of maternal affection she has for him. Their relationship has always been fraught - even as an infant, Eva reacted to him as if he was deliberately attacking her with his non-stop wailing - but now she needs to find a way to connect with him, to make sense of what he has done so that the world itself can finally make some sense.

The fractured storytelling, which jumps seemingly non-sensically from time period to time period, helps establish a feeling of uneasiness and disequilibrium that draws us closer to Eva. Although Kevin is the character who features in the title, the story is really less about him than it is about Eva's mental state and how it has been affected by her relationship with Kevin and by his actions. In the present day scenes Eva seems very much like a person on the verge of a mental breakdown, haunted by the past and with virtually nothing to hold on to in the present. The film's construction reflects her mental condition and though telling a story in this way makes it more challenging in terms of being able to find your footing in it as an audience, it also provides it with a greater sense of depth.

As Eva, Swinton delivers a fantastic performance, one which never shies away from the character's flaws but still makes her seem at least somewhat sympathetic. Maternal indifference is not a subject broached very often in fiction, and certainly not from the point-of-view of the mother, and the topic is handled in a very effective way here. We can sympathize with Eva because Kevin is such a difficult child, but we can also see that his rage may have its roots in the hostility that Eva directed at him as an infant and toddler. The interplay between Swinton and Miller is brilliant, exposing the relationship between Eva and Kevin in all its intricacies and subtleties. Like Swinton, Miller's performance is incredibly strong, at times even riveting. Due to its subject matter We Need To Talk About Kevin will probably be off-putting to many viewers, but it's the kind of film that you'll find yourself reflecting about for a long time after you've watched it. It's not necessarily the kind of movie you will "like," it's the kind of film that makes for an ultimately rewarding viewing experience.
Posted by Norma Desmond at 6:53 PM