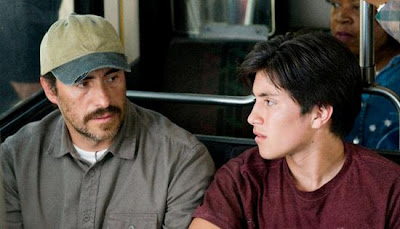 When Demian Bichir earned an Oscar nomination for his performance in A Better Life, it took a lot of people by surprise. It's such a low key, low profile movie, particularly when compared to some of the much talked about films that failed to net nominations for their actors, and things only get more surprising when you realize that this gentle drama comes from the director of such bombastic fare as Twilight: New Moon and The Golden Compass. Once you see the film, however, it's easy to understand how Bichir's performance gained enough notice to earn a nomination as it is so wonderfully naturalisitc and incredibly moving.

Set in Los Angeles, A Better Life centers on Carlos Galindo (Bichir), an undocumented worker and single father of Luis (Jose Julian), a teenager whom he fears may get sucked into the gang culture that surrounds them. Carlos has been working for Blasco (Joaquin Cosio) as part of a two man gardening crew but now Blasco is planning to move back to Mexico and is trying to pursuade Carlos to buy his business. Carlos is reluctant to do so, but ultimately realizes that it's the only way to make enough money to support himself and Luis. After borrowing some money from his sister, Anita (Dolores Heredia), he buys Blasco out and finds another worker, Santiago (Carlos Linares), to help him out. Before the first day is finished, however, Santiago has stolen Carlos' truck and all his tools, leaving him on the edge of ruin.

Carlos and Luis begin an odyssey through Los Angeles, trying to track down Santiago. Luis is bent on revenge, while Carlos simply wants his truck and tools back. When their search leads them on a short detour to a Mexican rodeo, the two have a heart to heart in which Luis expresses his anger about his mother having abandoned them, as well as his ambivalence about his culture. For his part, Carlos attempts to help him connect with the culture and expresses his own fears about the path that Luis is on the verge of following. Later the two finally find Santiago and the differences between them become even more apparent by how they handle the situation: Carlos simply wants his truck back and can understand what motivated Santiago to do what he did; Luis, meanwhile, is ready to use Santiago as an outlet for the anger that has long been simmering inside of him.

The screenplay by Eric Eason is well constructed, taking the well-worn quest narrative and balancing it with elements of the family drama. It builds well, developing Carlos and Luis as characters and fleshing out the dynamics of their relationship while also unfolding the story and allowing it to twist and turn in ways that feel natural and organic. When Carlos and Luis find Santiago, it's not the end of the story but rather a fork that takes the story in a whole other direction, one which has far reaching consequences. There is obviously a political slant to the film, but I wouldn't call it a "message movie." Rather, it's a film that taps into a very real political issue and uses it to add texture to its already compelling story. It has a clear point-of-view, but it doesn't allow politics to dominate the film at the expense of the characters and story.

A Better Life has many strengths, but its greatest is Bichir's performance. His portrayal of Carlos has a lived-in, natural feeling to it and his understated performance helps moderate the more passionate performance of Julian. Carlos is not a perfect person and his mistakes cost him dearly, but his humanity is never in question thanks to Bichir. The performance may not be as showy as many of the other notable performances from 2011, but it is definitely worthy of praise and recognition.
Posted by Norma Desmond at 8:00 AM