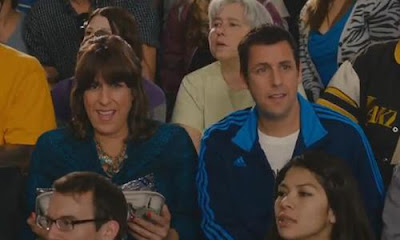 The plot of Jack and Jill, such as it is, is this: Jack (Adam Sandler) is an advertising exec based in Los Angeles, where he lives with his wife, Erin (Katie Holmes), and their two children. Jill (also Sandler) is his twin sister, who lives in the Bronx, and whose clinginess irritates Jack to an intense degree. When a visit for Thanksgiving turns into an extended, open-ended vacation that threatens to last until New Year's, Jack becomes increasingly desperate to get rid of Jill, though the rest of his family adores her.

Jack begins to change his mind after taking Jill to a Lakers game where they encounter Al Pacino, who Jack has been pursuing for a Dunkin Donuts commercial, and who takes an immediate shine to Jill. Jack tries to facilitate a relationship between Jill and Pacino, despite Jill's disinterest, in order to secure a deal for the commercial which ultimately leads to Jack dressing in drag, Jill feeling used and hurt, and an overwhelming sense that Pacino (who delivers a bizarrely committed performance, given the material) needs money.

Jack and Jill is, without question, one of the most aggressively unpleasant films I have ever seen, one which is rarely funny and aims for the lowest common denominator at all times. As far as I can see, the construction of Jack and Jill breaks down as follows: 25% cameos (in addition to Pacino there's also Shaq, Jared Fogle, John McEnroe, Regis Philbin, Bruce Jenner and many, many more), 30% toilet humor, 15% mild misogyny, 20% undeserved sentiment (the first two acts and the last will make you retch for entirely different reasons), and 10% lack of understanding about the difference between identical and fraternal twins. Of course, acknowlegding that male-female twins are only ever fraternal would mean sacrificing both the joke about how Jill is the "nocturnal twin" and the entire purpose of the film, which exists solely so that Sandler can play his usual angry manchild character and be in drag.

Seriously, don't ever see this. It's not even "so bad, it's good," it's just stupid, pointless and gross.
Posted by Norma Desmond at 8:00 AM

Hi! I started following your blog some days ago. I never understood movies where one actor plays more than one roles, so even though I haven't seen this one I know you're 100% right!

I'm not sure I've ever seen a good movie where one actor played multiple parts - except, possibly, The Parent Trap. Thanks for following!