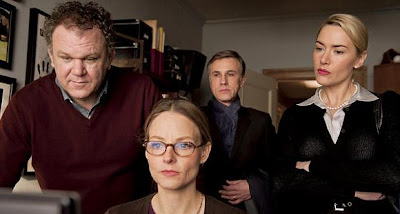 In Luis Bunuel's The Exterminating Angel, guests arrive at a home for a dinner party, enter a room, and then find that they cannot leave. Nothing impedes them from leaving the room; they simply find that they cannot step out. Carnage, based on the play God of Carnage is a lot like that, focusing on four characters who, despite their growing need to be away from each other, find that they just can't leave the Brooklyn apartment which belongs to two of them. As politeness gives way to long simmering resentments, the apartment becomes a battleground of upper middleclass problems.

The catalyst of the story is a fight between two boys which ends with one hitting the other with a stick, causing severe dental damage. The injured boy is the son of Michael and Penelope (John C. Reilly and Jodie Foster), the other boy is the son of Alan and Nancy (Christoph Waltz and Kate Winslet). The four have gathered together in Michael and Penelope's apartment in an attempt to work things out in a civilized manner and help the boys reconcile their friendship. Although things begin cordially enough, the longer the four occupy the same space, the more emotionally fraught things become.

Nancy, though overly conciliating at first, is slowly worn down both by Penelope's continuing insistence that Nancy and Alan's son not just say he's sorry, but that he feel sorry as well, and by Alan's near total lack of concern about the situation. Alan spends much of the film fielding calls on his cell phone, trying to put out a fire at work and allowing his personal life to take a backseat (per usual, judging by Nancy's increasingly unhinged attitude). Michael eventually reveals that the "touchy feely" approach to handling the situation was entirely Penelope's idea and that, far from supporting it, he actually thinks the fight was just a simple right of passage thing that boys go through. Penelope, meanwhile, is after more than simply an apology; she desperately wants the approval of Alan and Nancy, who represent what she ultimately aspires to, even if she won't admit it.

Although the focus is often on the two boys, the tensions between the two couples arise more from class differences. Alan is a high powered lawyer and Nancy is in finance, while Michael is a salesman and Penelope is a writer who has lots of opinions and ideas, but not much actual work to show for it yet. Alan subtly belittles Michael's business, while Penelope overcompensates for her feelings of economic inferiority by trying to impress upon Alan and Nancy that she is an ultra-intellectual. On top of all that, there are also issues between the respective husbands and wives, and both marriages are beginning to show cracks as the film draws to a close.

The screenplay by Roman Polanski and Yasmina Reza (author of the play) structures the story so that it has the rhythm of waves with Alan and Nancy continually trying to leave only to find themselves drawn back. Sometimes they make it as far as the apartment's hallway, sometimes as far as the elevator, but ultimately they're always pulled back into that apartment to go another round with Michael and Penelope. The momentum of the story grows stronger with each coming and going until finally it seems like everyone except Nancy (who has tried so hard to play peacemaker up until this point) seems resigned to the fact that the four of them may be stuck there forever.

Although on the surface, a film about four people in a room fighting might sound static and boring, when the characters are played by such dynamic performers it's anything but. Each part is exceptionally well played on its own, but also works in marvellous harmony with the other three. If there is a standout (and even then, only by a hair) it's Foster, who gives Penelope such sharp edges but also manages to moderate her performance enough to keep the character from coming off as shrill. Although the film itself is ultimately "lesser" Polanski (though when someone has Chinatown, Knife in the Water, Rosemary's Baby and The Ghost Writer to their credit, that's hardly an insult), it's also very entertaining.
Posted by Norma Desmond at 8:00 AM

I really thought this was an incredible film. Four people just arguing in an apartment and saying all sorts of crazy shit had me laughing.

The ending itself was the real kicker for me. I had a hell of a time watching that film while it made me convinced that Polanski's still got it.

oooh i wasn't sure whether this was going to be positive or not lol. but i enjoyed it too. i thought it was very engaging. only four good actors could basically make one scene so interesting.

Foster, Winslet, Waltz and Reilly are a truly superb combination.