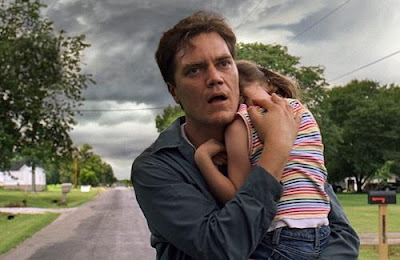 Take Shelter is a horror film in which no one dies, a psychological story that cares more about instilling a deep set feeling of dread in you than giving you the temporary scares that come from creatures popping out behind corners and massive gore. It's a well acted and perfectly crafted piece of work and so terrifically unsettling that I believe will one day be considered a classic of its genre.

Michael Shannon stars as Curtis, a construction worker plagued by dreams of the apocalypse. The dreams involve a terrible storm in which the rain has the look and texture of motor oil and in which people begin acting mindlessly and violently. In his dreams, the people Curtis knows turn against him and try to harm him and his daughter, Hannah (Tova Stewart), and when he wakes he can still feel the pains of the injuries inflicted in the dreams. At first Curtis thinks the dreams are symptomatic of hereditary mental illness - his mother (Kathy Baker) suffers from paranoid schizophrenia - but as the dreams continue and become increasingly more intense, Curtis becomes convinced that they are prophesy rather than mental illness.

Curtis attempts to hide his predicament from his wife, Samantha (Jessica Chastain), but his preoccupation with impending doom can't be hidden for long. By the time he begins building a massive storm shelter in the back yard - taking out a dangerous loan against their house to pay for it and borrowing equipment from work to build it, which later results in him losing his job - Samantha has pretty much had it and worries about how they'll keep the roof over their head and pay for an impending surgery for Hannah. She comes up with a plan to keep their family afloat, a plan which includes him getting psychiatric help, but Curtis persists in his belief that the end is nigh and word of an impending storm moving in only reinforces that.

The screenplay by Jeff Nichols, who also directs, is very strong, setting the story up so that it would be equally believable for the film to resolve with the revelation that Curtis is suffering from delusions or that he's been right all along. It moves fluidly between the notions that Curtis may be crazy and that Curtis may be a prophet of doom, allowing the film to frequently and successfully transition from psychological drama to intense horror story. Because it makes such a great effort at rooting itself in reality, the supernatural/apocalyptic elements of the plot are all the more effective and the film itself all the more unsettling.

The ominous feeling that builds throughout the film is due in large part to Nichols, who is able to create and maintain an extraordinary level of narrative tension, but credit also goes to Shannon, whose performance firmly anchors the story. Like the film itself, Shannon does a wonderful job at walking the line between the suggestion that Curtis is crazy and the idea that he's a Cassandra who can see doom and destruction coming, but who can't make anyone believe him. He himself doesn't always believe that his visions are going to come true and Shannon plays up that uncertainty in a very effective way without ever making it "showy." His performance is very natural and has a feeling of authenticity that just makes Take Shelter all the more frightening. Take Shelter flew a bit under the radar when it was in theaters (although not so low that there wasn't plenty of Oscar buzz around Shannon), but it's definitely worth seeking out.
Posted by Norma Desmond at 8:00 AM