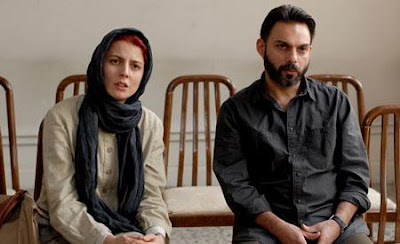 It's hard to define what makes a movie great. If there was an exact science to it, we'd be overwhelmed by cinematic greatness all year round, but that's not the case because "greatness" is a precious quality, one that cannot be engineered, but has to be left somewhat to chance. What all great films have in common, though, is that they resonate, striking a chord in the human experience. Asghar Farhadi's Oscar winning A Separation is one of those great films, a story of moral and emotional complexity that transcends its particular political context to become something universal.

A Separation opens with divorce proceedings, with Nader (Peyman Moaadi) explaining that he doesn't want to divorce his wife, Simin, (Leila Hatami), but that he won't try to force her to stay, and Simin explaining that she would happily stay married if only Nader would emigrate with her and their daughter, Termeh (Sarina Farhadi). The Visas for all three have finally come through, but they only have forty days left to use them and Simin is desperate to leave so that Termeh will not have to come of age under Iran's current political climate. Nader's position on the matter is complicated by the condition of his father, who suffers from Alzheimer's, and whom he can't leave behind. The judge ultimately rejects Simin's argument for divorce, but she and Nader separate anyway and Simin moves back in with her parents, hoping that by doing so she can convince Nader to leave the country with her or, at least, that she can convince Termeh to declare her desire to leave with her.

With Simin absent, Nader hires Razieh (Sareh Bayat) to come during the days to stay with his father while he's at work. The job is difficult for Razieh, both because of her pregnancy and because her deeply religious views make caring for an unrelated, elderly man nearly impossible. Things begin to spiral out of control after an incident in the home which results in Nader firing Razieh and accusing her of having stolen money, and which ends with him pushing her out of the house when she refuses to leave. Later Simin and Nader learn that Razieh has been hospitalized and later still Nader is brought up on charges for the incident. From here the film examines the court case from a variety of angles, exploring the motivations of everyone involved in the case and the way that the class difference between Nader and Simin and Razieh and her husband help to shape the situation.

Farhadi, who wrote the screenplay in addition to directing, handles the proceedings with such a deft, graceful touch that it's almost easy to lose sight of how much nuance he gives the story. He does not present this as a story of heroes and villains, good characters and bad; rather, he allows each character to adopt a position that is logical, given their situation, and shows how the logic of one can be so completely at odds with the logic of the others. The film is not critical of Islam as a religion, but does show how the inflexibility of religious tenants makes them unsuitable to be adapted for use as legal principles. It isn't a political film, per se, but it does use the contemporary political situation in Iran to provide a framework for this specific, smaller-scale story.

Although Farhadi demonstrates a tight control over the narrative, building it in a methodical way so that each scene offers a new level of complexity and moral ambiguity, he is also able to make everything feel natural and organic. It is easy for us to empathize with the characters because they seem real and because their struggles are so often between what "is" right and what "feels" right. This is a very human story, one which puts the characters first and cares about telling you something about them. The Academy often gets it wrong when they select their Best Foreign Language Film; this is an instance where they very much got it right.
Posted by Norma Desmond at 8:00 AM